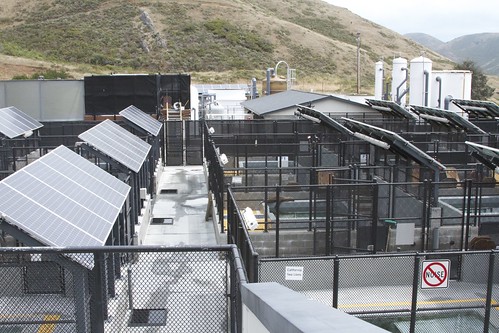 The Marine Mammal Center, located in Sausalito, California, is an institution dedicated to the study and health of marine mammals, particularly seals, sea lions, otters, and whales. In their extensive veterinary programs, they rescue, rehabilitate and often release many of these animals, and work to identify causes of illness and injury. Visitors to the center can see some of the healthier patients (not the ones in the ICU) in these outdoor hospital pens shaded by solar panels as well as the research labs and a great many exhibits about these creatures. 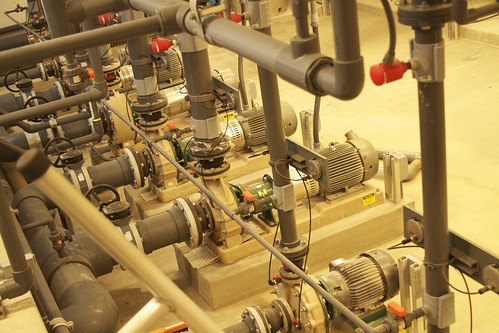 We were recently invited to a behind-the-scenes tour of the center to get a first hand look at some of the amazing equipment and machinery that is needed to run a hospital for these unique patients. In what follows, we’ll show you some of the neat things that most visitors don’t get to see, from glowing purple plasma to Nike missile silo blast doors. 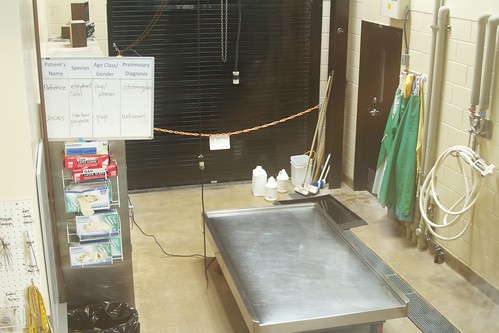 The first part of out tour started in the publicly accessible areas. There is a visitors window overlooking the necropsy lab, where you can see post-mortem exams when they’re in progress. This is a very important part of their work. When patients die or dead marine animals are found they are examined to attempt to determine the underlying causes. Work here has lead to a better understanding of marine diseases. 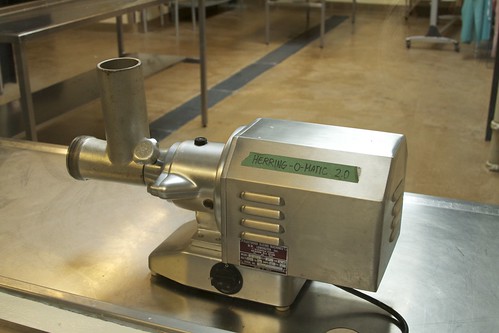 Dozens of hungry marine mammals dine on food prepared in the center’s food kitchen. The Herring-O-Matic 2.0 must save them a lot of prep time. Sadly, we didn’t get to see it in use. 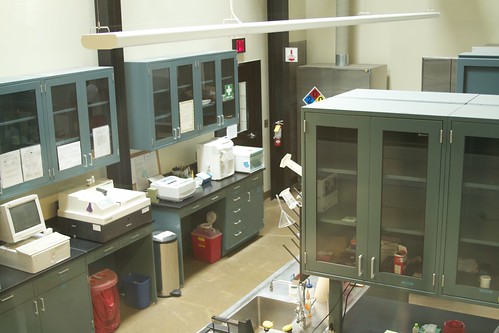 These are some of the research labs that are also visible to visitors through a glass wall. They appear to be in heavy use, but Sunday morning may not be the best time to observe scientists in their native habitat. 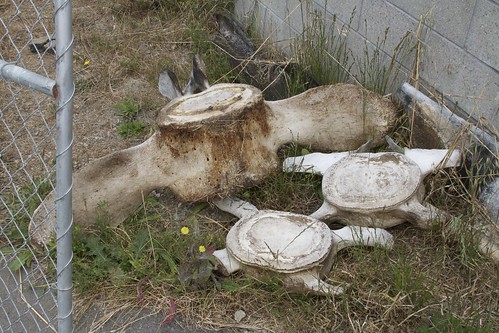 We stepped through a staff gate, and out past some whale bones undergoing a natural cleaning process. When animals are found dead, the scientists often bring them back for study and they are set out to bleach. Possession of marine mammal body parts (including bones and fur) by individuals is illegal under federal law. 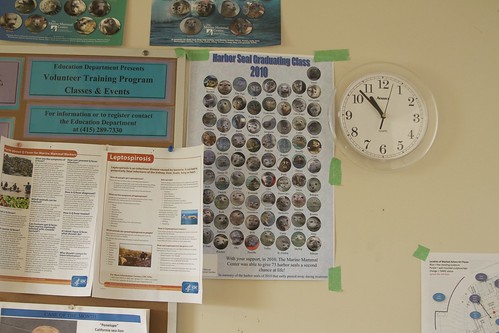 We stepped through a bleach bath for our shoes and into the Harbor Seal Hospital and Marine Mammal Surgery Center. The Harbor Seal Graduating Class of 2010 poster above shows the animals that were rehabilitated and released last year. Harbor seal pups suffering from maternal separation arrive without the benefit of immunity from their mothers milk and are extremely fragile. They are kept in a separate pen area with completely isolated pump and filtration systems so that they won’t be exposed to pathogens from the other patients. 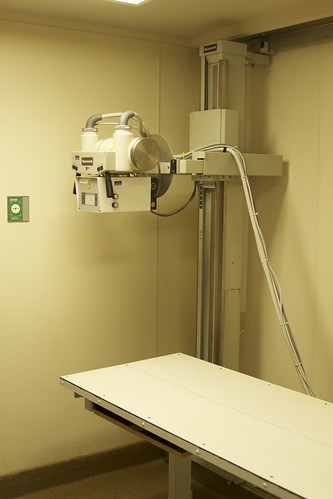 This building houses a lead-lined x-ray room with an awesome giant x-ray table. 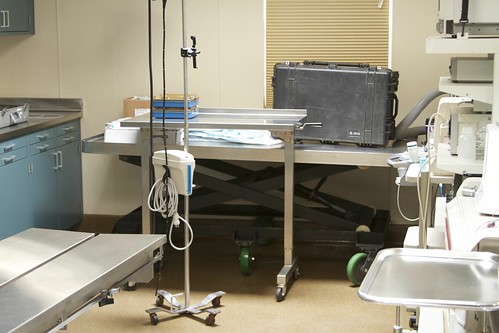 This is a surgery room where you can see two surgical tables. The table in the back is used for the big bulls–adult male elephant seals can weigh several tons. 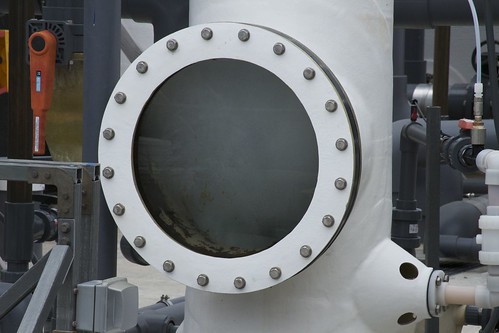 This vapor filled tower with a clear flange is filled with ozone that is used to disinfect the water going to all of the hospital pen tanks. 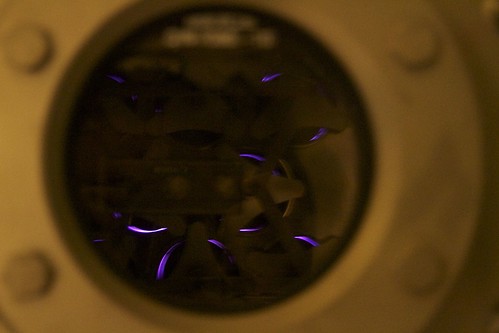 Ozone can’t be stored, so it is created as needed in this ozone generator. Ozone is produced in a silent electric discharge across an air gap in long stainless steel cylinders. An advantage of using ozone to disinfect the water, as opposed to, say, chlorine is that the ozone can be removed from the water after disinfection and before it is returned to the pens. 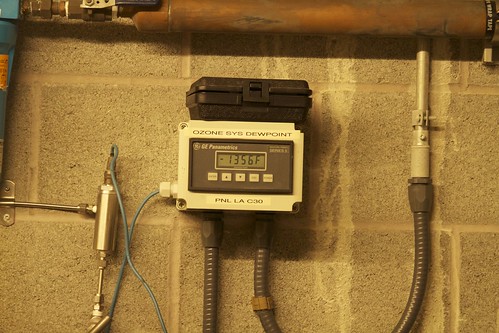 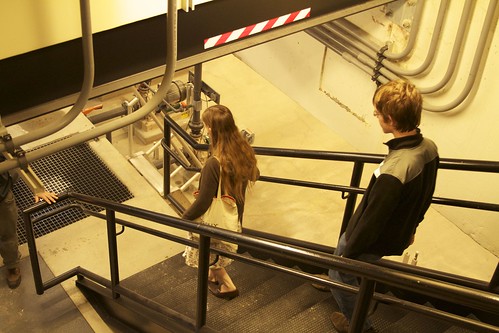 The center is built on an old Nike missile silo, and so much of the equipment is installed underground. This type of silo is not a deep cylindrical one, since Nike missiles were on tilted launchers. The original floor is just below the new concrete floor poured here. 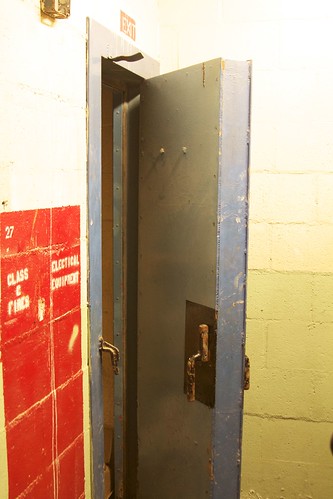 On the side of the silo is a small emergency bunker for the crew. Some of the old military markings remain, including at the former ladder exit out of the blast room. 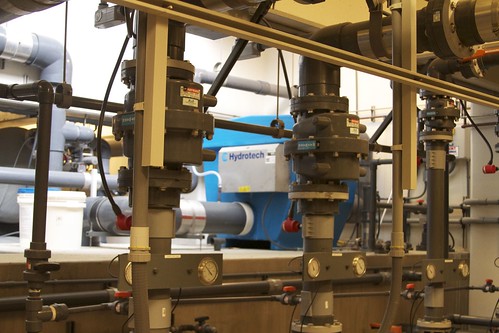 These are foam fractionaters, also known as protein skimmers, used to remove organic compounds from the salt water. 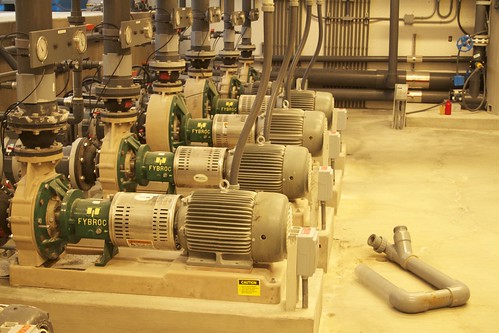 Part of the array of pumps that moves water throughout the facility. The pumps have fiberglass impellers and many of them are driven through rubber couplers. 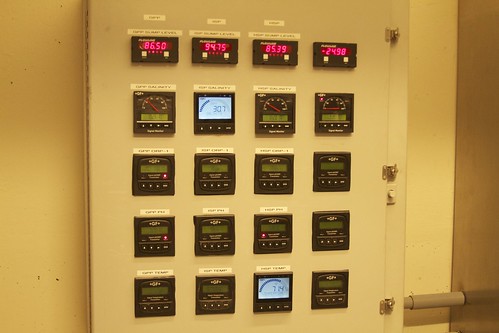 Process monitors down in the silo. 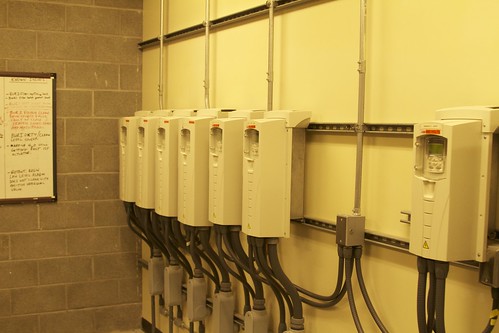 This array of VFDs (variable frequency drives) runs that array of pumps. Notice that there is room for expansion built into the system. 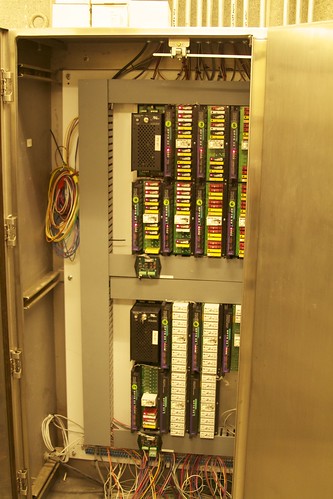 This is one of a couple of cabinets full of computer controlled relays and monitoring equipment that controls the plant.

All of the PID loops that maintain water quality and flow are run by custom software. 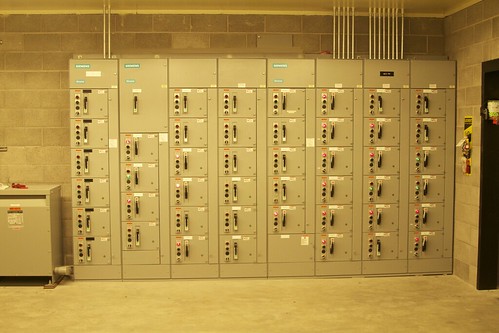 A great assortment of hose clamps. 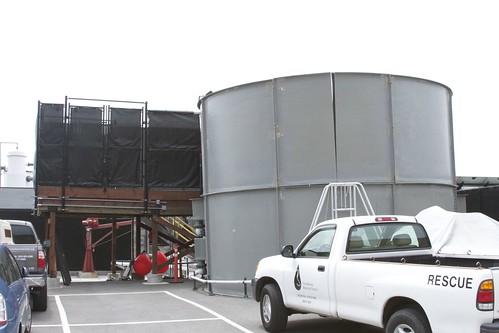 Although they don’t often have dolphins on site, they do have one dolphin tank that can be filled to different levels and used for other animals when needed as well. 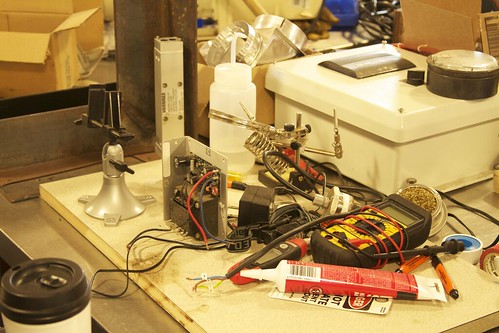 Our final stop was in the workshop. You can see many more pictures in our flickr set. Special thanks to Matt for the amazing tour!
This entry was posted in Field Trips, Nature, Science and tagged museum. Bookmark the Permalink.