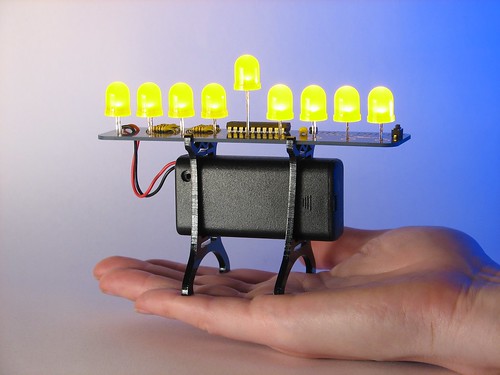 One of our favorite little kits is our Deluxe LED Menorah kit. Since we introduced it two years ago, one of the most common questions that we get asked is this: “Can you use candle-flicker LEDs in it?” And thatturns out to be a very interesting question.

The simple– but, alas, naive –answer is “yes.” We have discussed candle-flicker LEDs in the past, and in most cases, yes you candirectly substitute them for regular LEDs.

But if you do go ahead build up a menorah kit with the candle-flicker LEDs,
what you will find is that the performance is simply terrible: Not only do these LEDs fail to perform properly– (there is no “candle flickering”), but they actually exhibit behavior that we might categorize as “not even wrong”– the LEDs are not particularly steady either, but are rather a bit weak and jittery.

The reason for this is that in the kit, the LEDs are not left continuously it, but are instead continually– and far too quickly for the eye to see –pulsed on and off. This is done because the menorah kit uses pulse-width modulation (PWM) dimming to produce a range of different brightness levels. Not only does the menorah have two different selectable brightness levels, but it also has the ability to softly “fade in” and “fade out” the LEDs when they light up or switch between the brightness levels.

In most ways, this PWM dimming is a wonderful thing. It allow us to create these gentle fades and different brightness levels, and allows us to really fine-tune the performance for better power efficiency. While this works extremely well for regular LEDs, each of the so-called “candle-flicker LEDs” is not just an regular LED, but is actually a regular LED packaged with a tiny integrated circuit that executes the “random flicker” program. And, that chip can only execute its program properly if it’s left on continuously. If instead, it is continually pulsed on, we might indeed expect to end up with the kind of jittery, inconsistent behavor that we do see in the kit.

How could we go about fixing this, if we wanted the LEDs in our menorah to flicker? It would be straightforward to remove the dimming features from the software, and actually use the self-flickering LEDs in a mode where we leave them on continuously. But in doing so, we would lose a couple of our favorite features: the gentle fade-ins that make the kit so elegant, and the ability to have multiple brightness settings.

So that’s a tough choice: Do we forgo flickering, or live without our elegant gray scale fades?

But fortunately, there is a way out. The right solution is to remember that we do have a microcontroller– an ATtiny2313 –running the show, and to start acting like it. If we go back to regular (non-flickering) LEDs, we should be able to write a “random walk” flickering algorithm and add that to our existing firmware. In doing so, we can keep our original fades and brightness modes. We also can keep the kit price the same (since we don’t need the more expensive flickering LEDs), and as a hugeadded bonus, we can now turn on or turn off the flickering at will– something that you can’t do with LEDs that always flicker.

Today we’re releasing the new version of the menorah kit software, and shipping it in the kits. And, we made a little video(embedded below) to show off the new flicker modes and what happens when you try and use flickering LEDs with PWM:

The new source code– Menorah kit software version 1.3 –is available here, and it can be used to upgrade any older Deluxe LED Menorah kit as well. :)

This entry was posted in EMSL Projects and tagged LEDs, menorah. Bookmark the Permalink.

14 thoughts on “Improving the Menorah kit”