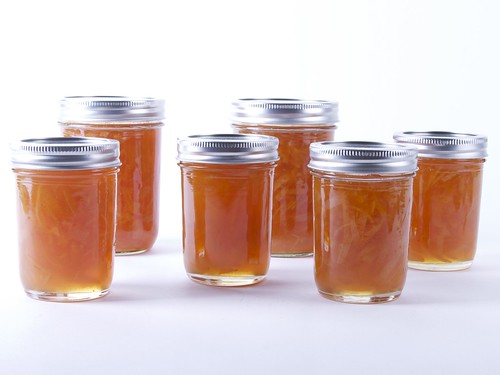 It’s lemon season again, and that means more marmalade! Last year we showed how incredibly easy it is to make a simple marmalade. That kind was more of the bitter, opaque variety–which might be your favorite–but here’s how to take that to the next step and make a light and sweet marmalade. Last time, we did it the easy way–cutting everything up and throwing it in a pot. This time, we’re using out a slightly more traditional technique. We’re starting with a seville orange marmalade recipe that is remarkably similar to our earlier recipe, at least in terms of ingredients: fruit, water and sugar. By straining the pulp out and keeping the pith separate, we can make a much more transparent preserve. We still need those parts for producing pectin, so they get tied up in cheesecloth for the first part of the cooking. As before, first peel the fruit and cut the peel into slices. You can soak them for several hours in water or blanch them to help remove bitterness if you like. Next, juice the fruit and set aside the pithy and pulpy parts. Strain the juice through a couple of layers of cheesecloth, and then tie up all the pith and pulp in the cheesecloth. Then put the strained juice and peel in a pot with the bag of pith, cover with water, and boil until the peel gets nice and soft. 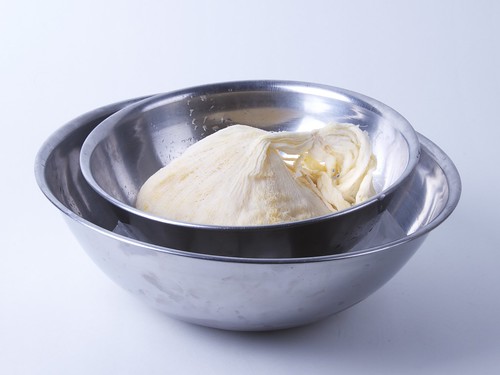 Remove the pith bag and put it in the cold equivalent of a double boiler: a bowl on top of a layer of ice that’s in a larger bowl. Turn the bag over every so often to help it cool down more quickly. When it is cool enough to handle, squeeze out a few tablespoons of the cooked pulp and pith through the cheesecloth–this will provide the pectin that will help the marmalade to gel. 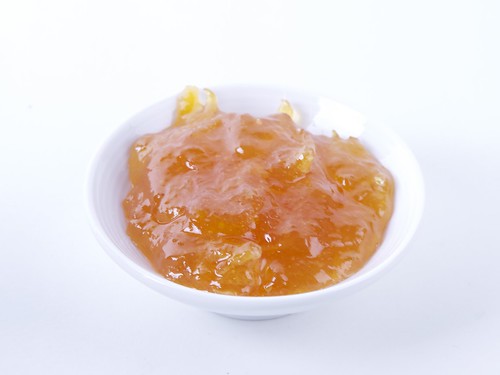 Put the pectin goo into the pot (which you conveniently left simmering on the stove) and add your sugar. Stir regularly and cook to the desired consistency. And that’s it, you’re done. You can, of course, can the finished product, or you can just spoon it into a bowl and serve it. 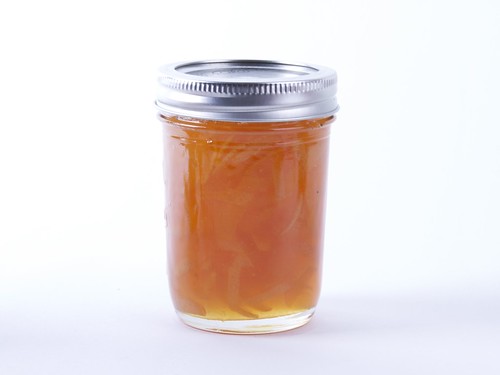 The extra step of separating and straining the pectin is a little more work, but it makes for a stunningly beautiful marmalade. The stuff just glows in the jar. It is darned tasty, and the consistency of the peel is very nice. It doesn’t have the same depth of flavor and bitter bite that you get from keeping all of the bits of pulp and peel in. It is much more like a store-bought sweet marmalade (and not the corn syrup kind!) than like the bitter marmalade we made before. Our taste tests so far confirm that this is a real crowd pleaser. Another variation we had success with was lemon-ginger, which our commenters had suggested. Grate a big chunk of peeled ginger into the pot with the fruit pieces, and get a nice flavor kick. If you’re inspired to make some, or come up with new variations, we’d love to hear about it, and we love seeing your pictures in the Evil Mad Science Auxiliary flickr pool.
This entry was posted in Play with your food and tagged food. Bookmark the Permalink.