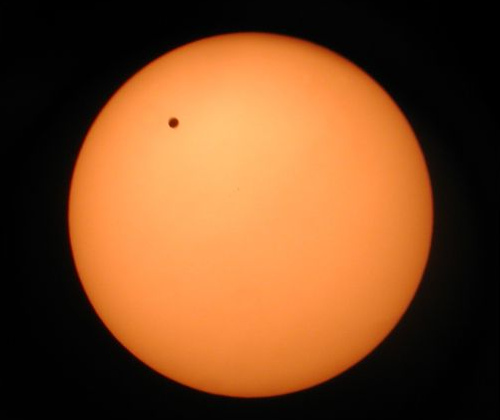 Today, Tuesday June 5, 2012, the planet Venus— the planet in our solar system that is closest to the shape and size of Earth —will leisurely pass squarely between the Earth and sun.

The Transit of Venus, as it is called, is a once (or maybe twice) in a lifetime event. If at all possible, make an effort to see it today, because you won’t have another chance… at least until the year 2117.

Now, how to actually view it?

If you were clever, you might have stashed away an eclipse-viewing filter from the recent solar eclipse.  If not, another option— one that is cheap and easy to find at hardware stores —is a set of welding glasses with a #14 filter. (That’s black glass. Sadly, those dark green goggles that you found in the shed are likely not safe for direct solar viewing.)

But, as the Ontario Science Center warns you,

Be careful: there are many materials that may seem to block out the Sun’s rays, but which are not safe to use for solar viewing. DO NOT LOOK AT THE SUN THROUGH sunglasses, photographic neutral density filters, polarizing filters, photographic film, dark plastic such as garbage bags, or smoked glass.

If all else fails— maybe you’re in cloudy Portland —NASA has got you covered. Head right over here for a “live” feed of solar pictures from the SDO spacecraft in orbit around the Earth, and updating every 15 minutes.

Update: A nice summary of the historical background of viewing transits of Venus is here.

1 thought on “A Spectacular Speck on the Sun”