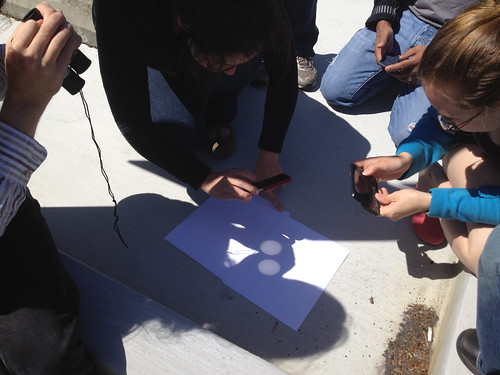 Venus is just now passing between the earth and the sun, and so we stepped outside to take a look. We brought out a pair of binoculars to use to project the image of the sun onto a piece of paper on the ground. We also took a solar viewing film, but it turns out that the binoculars were a great way to see it as a group. These pictures were taken just after Venus crossed over the edge, and the speck you can see at the edge is much clearer if you click through to the large size on flickr. Over there, you may also be able to make out a couple of sunspots that we were also able to see with the binoculars, but not with the viewing film. Remember, don’t look directly at the sun without proper safety equipment! (See our earlier post for more details on viewing techniques.) The transit is still underway, so you still have a chance to get outside and see it! 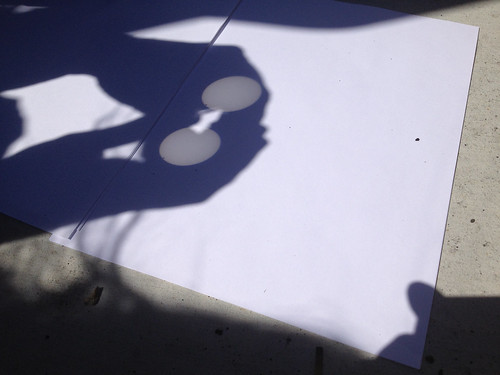 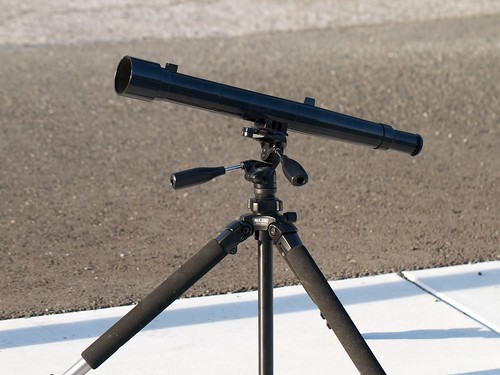 To get a slightly better view, we used a simple telescope mounted to a tripod.

Aside: This is the Galileoscope, a high-quality, very low cost telescope for $50 (or as little $25 in classroom packs).  It’s designed to let you discover everything that Galileo could see with his telescope, including craters on the moon and the moons of Jupiter, albeit with modern optics that dramatically improve image clarity. 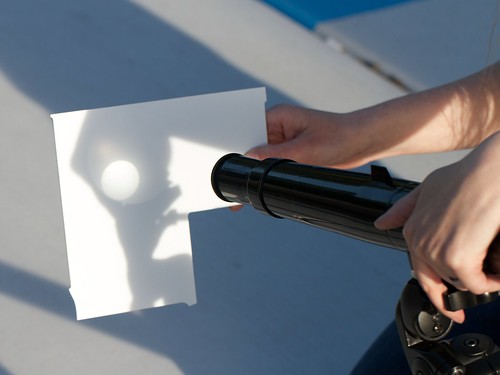 Now, the one thing that you really don’t want to do with a telescope is directly look at the sun through it. (It’s bad enough to stare into the sun; it’s much worse to concentrate the light into a tiny spot.  That’s a good way to start fires, not view the Transit!)

What you can do is to project the light from the telescope onto a piece of paper or matte-white plastic. Adjust the focus until the edges are sharp and— poof! —suddenly, you can see the sunspots. 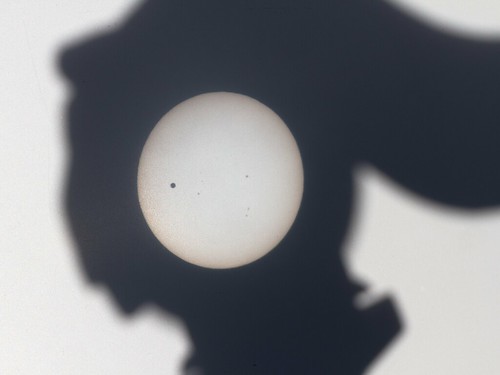 And the image quality isn’t half bad.  This picture was taken right at the “peak” of the Transit, when Venus was as far into the disk of the sun as it went.  Our image on the screen is about two inches (five cm) across, and it’s easy to make out the features.

Most stunning of all is the incredibly rare opportunity to see a planet in the sky not just as a “point of light” but to see it for what it is: another planet just like ours, slowly orbiting around the same sun.

2 thoughts on “Viewing the Transit of Venus”