Alpha Clock Five still has five remarkably bright, remarkably huge 2.3″ alphanumeric LED displays.  But for version 2.0, we’ve rewritten the firmware from scratch.  It’s packed with new features and it is simply a joy to use.

To name a few of those new features, Alpha Clock Five now:

And, here is one more thing that we’ve been cooking up for a long long time: 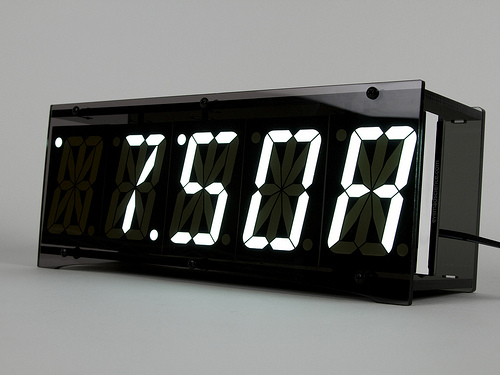 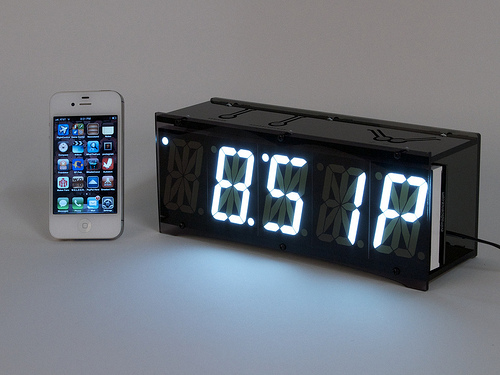 The all-new White Edition of Alpha Clock Five— with five 2.3″ alphanumeric LED displays, now in stunning white.   (And, shown above with a phone for scale.)

Read on for more about what’s new in Alpha Clock Five v. 2.0, and about the design of the White Edition. 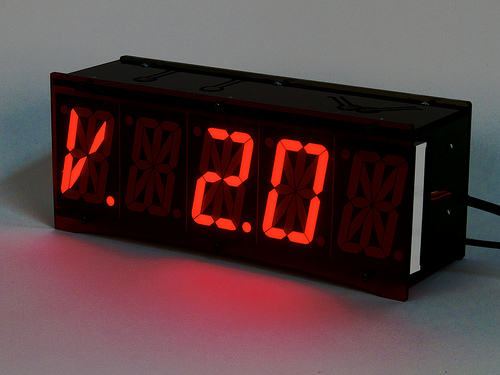 Here is some more detail about new features in Alpha Clock Five v. 2.0:

Alpha Clock Five has two hardware serial ports.  One that you normally use to connect to your computer, and one that, well, hasn’t been used much. 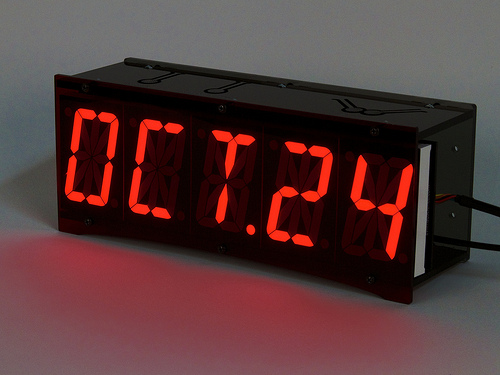 Version 2.0 brings Alpha Clock Five past “just” a bedside alarm clock all the way up to a pretty impressive desk clock.  As part of that, there’s a built-in calendar function that can show you the month and day, either at the press of a button (well, really, a pair of buttons), or continuously alternated with the time of day, fading back and forth every seven seconds.

There are also new functions to set the year and date in the settings menu.  (We can’t let leap years foul up our dates!)   Please see the user interface guide on our documentation wiki for a full map of the settings menu. 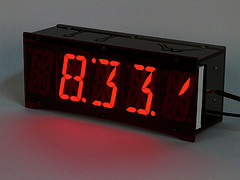 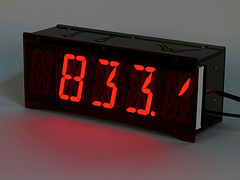 Our “usual” clock display mode has been to tell the time either as 11:34P when in 12-hour mode or 23:34H, when in 24-hour mode.  Rather than using that A/P/H suffix for indicating the AM/PM or 24-hour mode, there’s a new option to instead show the time with a seconds “spinner” — a rudimentary “seconds hand” that indicates roughly what part of the minute is being displayed.  As there are 8 directions in which the spinner can point, it is updated every 60 s / 8 = 7.5 seconds, at which point it fades (quickly) from one direction to the next.

Also, if the clock is in12-hour mode, it really is helpful to indicate AM vs PM.  So, the lower right decimal point (the one following “33” in the example) turns on to indicate “PM” when the seconds spinner is active.

For those of you who need a “tick” in your clock, there’s also a new option to flash the colon separators.  This can be turned on or off, either with or without the seconds spinner. 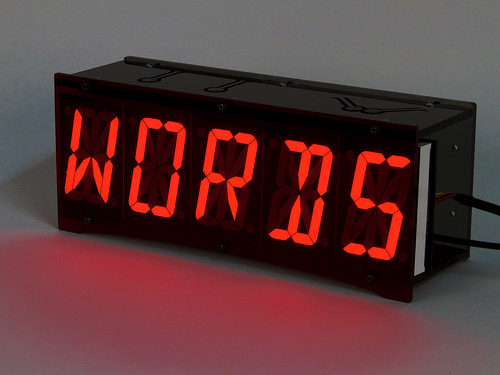 The “Four Letter Word” was an electronic sculpture created in 1972 by Raymond Weisling.  (See here and here for more information.)  It consisted of four huge alphanumeric nixie tubes— with characters roughly the size of those on Alpha Clock Five —and remarkably simple discrete logic that would cause it to randomly generate letter combinations (from 8000 possible values) that would often form words. 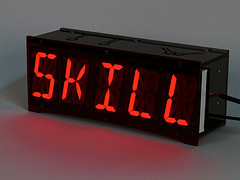 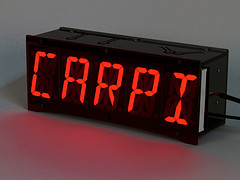 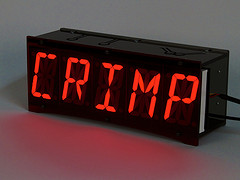 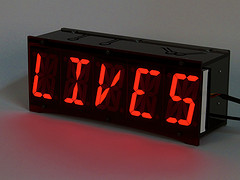 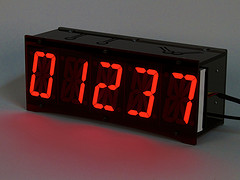 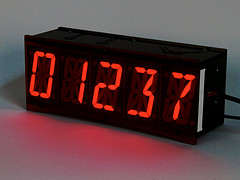 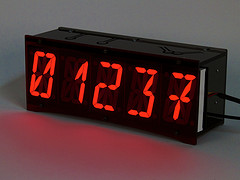 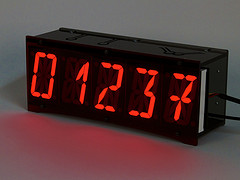 There are only so many recognizable ways to display a set of arabic numbers on an alphanumeric display.  We’ve picked ten of them to build into the clock, samples of four of which are shown above.  You can pick between the different font sets using the configuration menu. 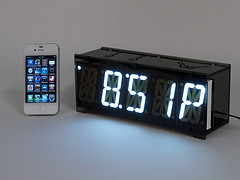 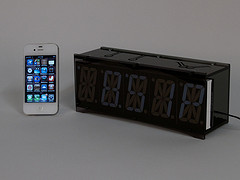 One of the big firmware challenges is providing a huge brightness range, without getting ghosts or artifacts at either end of the display range.  Our goal is to go all the way from surprisingly dim (for dark bedrooms) all the way up to surprisingly bright (for brightly-lit offices). The photo on the right shows the second-dimmest mode; the dimmest mode turns out not to be very visible when you photograph it. 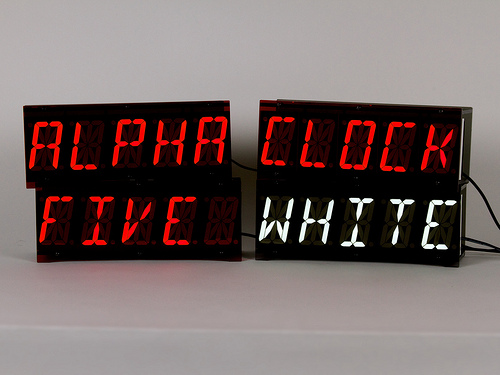 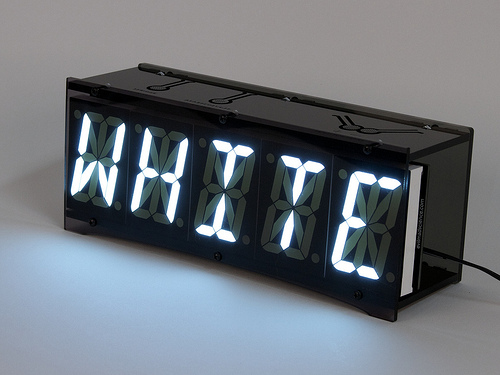 The White Edition of Alpha Clock Five has a number of differences from the red edition.

As we wrote when first releasing Alpha Clock Five (the red edition),

The white alphanumeric LED characters have the same arrangement of LED elements, but now each LED element requires about 3.6 V to drive, rather than about 2 V.  So while the Red Edition of Alpha Clock Five can run directly from a regulated 5 V power supply, the White Edition requires upwards of 7 V to operate.  So, Alpha Clock White comes with a 9 V power supply, and uses an on-board voltage regulator to generate the 5 V power necessary to drive the microcontroller.

However, that change alone is not sufficient for the circuit to work correctly.  We are multiplexing the display: switching on one LED character at a time from the high side with high-performance PNP transistors while we select individual LED segments on the low side with LED driver chips. This means that we need to use the signal from our microcontroller to switch off those high-side PNP transistors— and that isn’t directly possible when those PNP transistors are being pulled up to 9 V.

The solution, which we have already written about, is to use an open-collector buffer between the microcontroller and the PNP transistors. 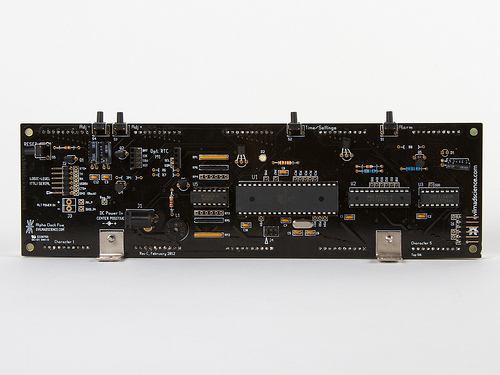 This same circuit board can also be used for a red version, by omitting the voltage regulator, leaving off the SN7407, and using a different set of resistor packs.