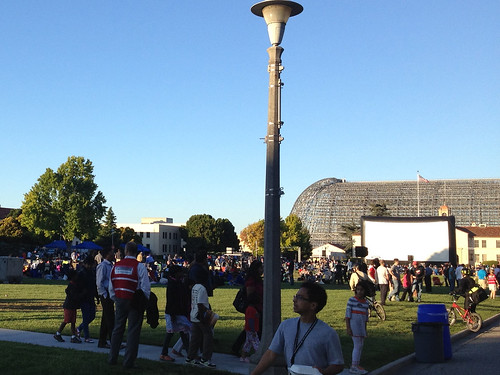 Congratulations to Curiosity! As the New York Times says this morning,

In a flawless, triumphant technological tour de force, a plutonium-powered rover the size of a small car was lowered at the end of 25-foot-long cables from a hovering rocket stage onto Mars early on Monday morning.

A crowd of some 5000 people gathered on the plaza at NASA Ames Research Center late last night (it was only Monday Morning on the east coast) to watch presentations by mission scientists and finally the live broadcast, on the big screen.

This was a thrill.  Not only was the landing process itself incredible— watch this video, “Seven minutes of terror” if you haven’t —but it was amazing to be in a crowd of so many people excited to watch the landing as well.  Many of the people in the audience screaming and cheering had worked on various parts of the mission, including the ground-breaking (pun intended) scientific instruments aboard the rover and the new lifting-body heat shield to get it there.