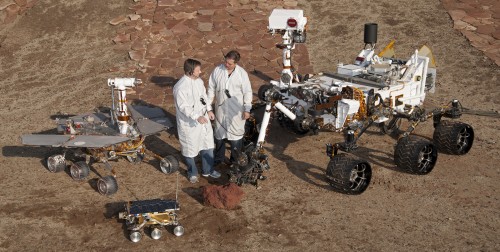 On Sunday night, the Mars Science Laboratory rover Curiosity (the one on the right; the biggest, baddest, most awesomest Mars rover ever) will attempt to land on Mars. Curiosity is a nuclear powered Mini Cooper sized robotic geologist, much bigger and more capable than previous rovers. It’s going to be a moment of great excitement when Curiosity touches down, and there are a number of ways that you can watch.

If you have the opportunity (Mars rover pun intended) check with your local science museum, planetarium or hackerspace to find out if they’re hosting a viewing party. 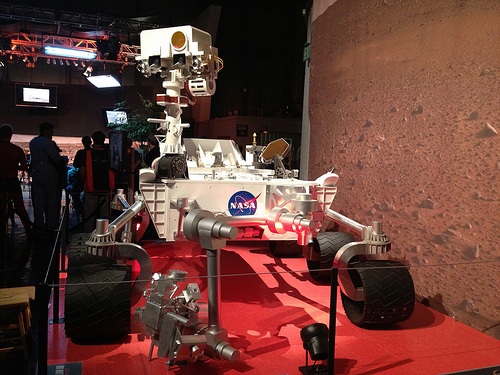 Here in California, the Exploratorium currently hasa special exhibition up, including the simplified full-scale model of the rover in the picture above. They will be airing a live webcast of the landing on Sunday night.  And, NASA Ames Exploration Center in Mountain View, is hosting a live broadcast on-site with over 5000 people. The free tickets for the event went very quickly.

And, if you can only watch on the internet, NASA TV is NASA’s official video channel.  Star Talk Radio has a list of places to watch online. Space Industry News has a similar lineup, which includes a link to a google map of events.
This entry was posted in EMSL Projects, Science and tagged curiosity, Mars, museum, science, space. Bookmark the Permalink.

2 thoughts on “Curiosity closes in on Mars”