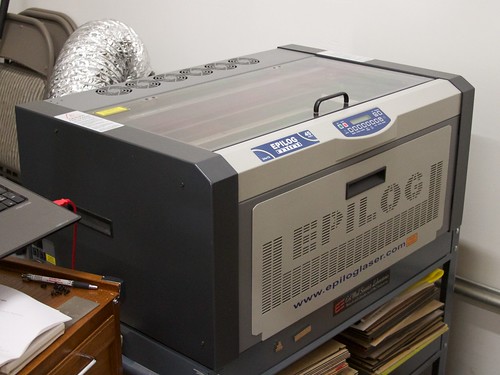 One of the most useful tools in our shop is our laser cutter— or more formally, our low power carbon dioxide laser cutting and engraving machine.   We use it for all kinds of mechanical prototyping, cutting parts out of wood and acrylic, and even some production parts, like the cases for our clock kits, the custom cloth numbers on our d12 and d20 bag kits, and the pen arm on the Eggbot kit. 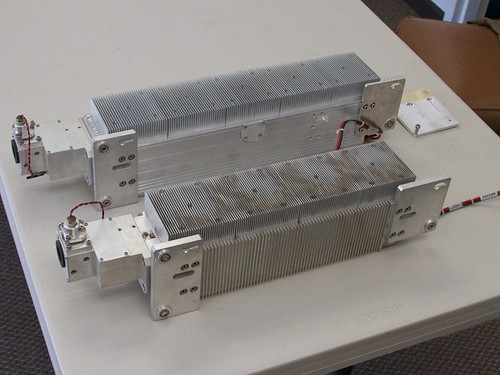 And while this has been a fantastic and reliable machine for the last several years, eventually the moment that we had dreaded arrived.  Our laser power began to droop, and it started getting harder and harder to cut through the materials that we regularly work with.  A visit from a technician confirmed that the power had fallen significantly, and that we needed a new tube.  The replacement process is actually managed as a swap: The factory sends us a new laser cartridge, and we send them back our old one.

But on the bright side, we get to take a close peek at the laser hardware. It is interesting to note that many commercial laser engravers have user serviceable parts inside. Even the laser cartridge itself can be replaced by relative novices. The smaller (closer, dirtier) of the two cartridges shown above is our old one, and the new (well, refurbished) cartridge came with installation instructions and mounting bracket adapter to compensate for the change in shape from the previous cartridge to the newer one. 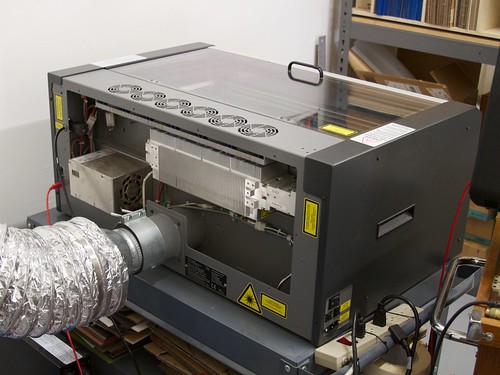 Our laser is an Epilog Mini 24, with a 45 W tube.   Upon opening the back of the laser enclosure, the old, tired laser cartridge can be seen in the upper right hand area. It has heat sinks on three sides of the enclosure. The ones on the top, which sit directly underneath the cooling fans, show an interesting pattern of dust. 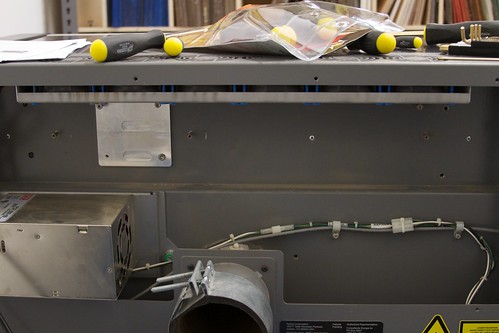 Once the cartridge is removed, there’s a lot of room back there. Which is a good thing, as the new model which was shipped is larger than the old one.  Our guess is that the larger tube was originally manufactured to be a 60 W tube, but falls short of that now that it has been refurbished.  And now, it’s one of the ones that they ship out to swap in as a replacement for a 45 W laser. 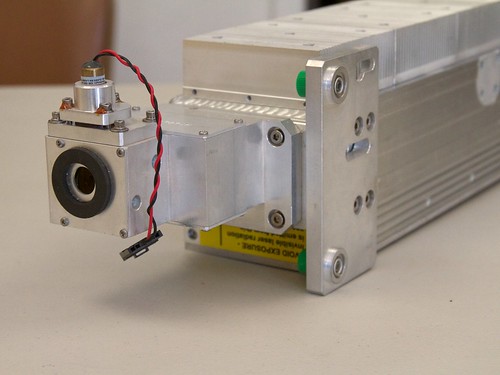 The new laser cartridge is shiny and beautiful. (And, we believe, manufactured by Coherent.)  The package is a tough sealed case made of machined and welded aluminum.  It’s an air-cooled assembly, so a big part of what this enclosure does is to transfer heat from the tube area to the big heat sinks on the top of the package. 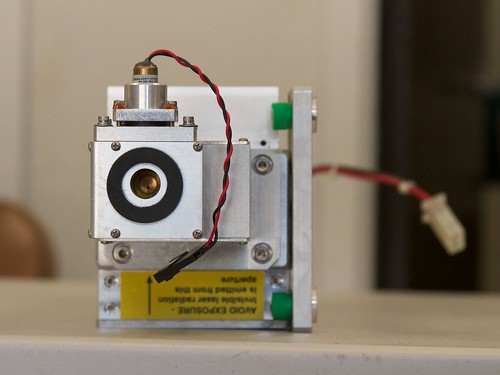 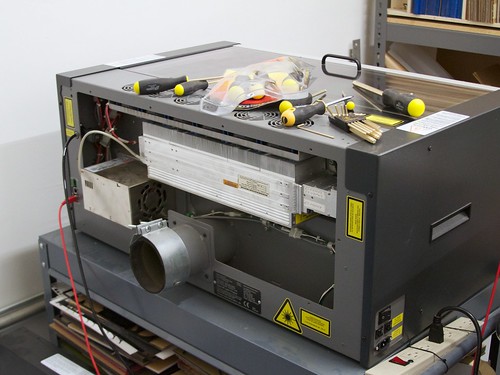 Here’s the new cartridge installed in place— it’s indeed much longer.  It’s held in place by just a couple of screws, one of which is on the adapter plate.  Once it’s in and the power cables are reconnected, it was time to get everything aligned and put back together. 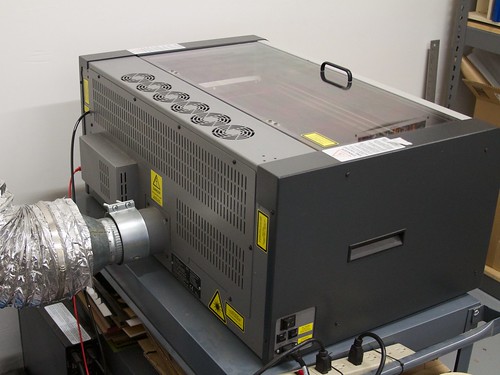 The alignment procedure was also easy to follow, if somewhat tedious. The laser beam has to be guided back though the optics so that it stays centered on the moving XY carriage as it moves across the 12 × 24″ area of the laser.

Here, we’re all closed up and ready to run again with exhaust filtration system connected.

We’re up back and running, cutting better than ever.  (Phew!)

Our subjective impression based on cutting speed— we don’t have an optical meter that can handle this much power —is that it’s actually closer to 60 W than 45 W, as it cuts faster than our laser originally did when it was new and running with just over 45 W of optical power.

This entry was posted in EMSL Projects and tagged laser cutter. Bookmark the Permalink.

8 thoughts on “Replacing the laser tube”