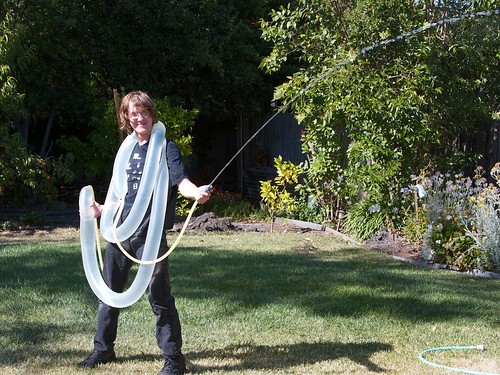 Summer is here, and with it, the advancing aqueous arms race!  Squirt cannons, water balloon launchers, and myriad other technologies for soaking your fellow citizens.

One of the classic squirt mechanisms is the “water weenie,” where the water is stored under pressure in a length of elastic tubing, and the force to eject the water is provided by the restoring force of that tubing. Often the elastic tubing is a simple length of latex “surgical” tubing, or in the case of the classic Wham-O Water Wiennie, a literal rubber balloon.   While people have almost certainly been squirting each other with these things since (we’re guessing about ten minutes after) the invention of the water balloon, the technology has more recently been reinvented as the “constant pressure system” used in modern high-end water guns.

Here is our take on the water weenie: How to make your own high-performance, arbitrary-capacity squirt machine, starting with basic hardware.    Our 10′ version shown above— which you can lift if you’re strong!  —throws water up to 25 feet and can empty over ten gallons of water onto your target in one continuous shot.  And of course, you can make it bigger if you want to. 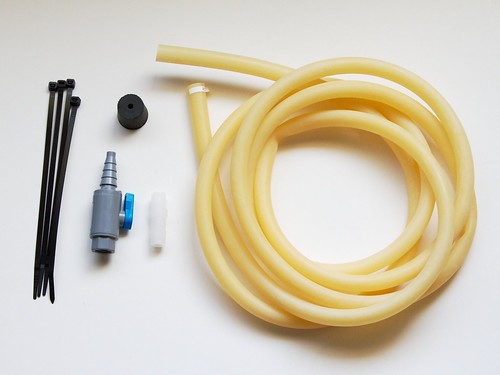 Tubing
The tubing is the central feature of the water weenie, and your choice of tubing size necessarily drives all of the other choices.  While “surgical” latex tubing is generally the best choice, there are other options, and you can even use a bike tube in a pinch.

For high ultimate volume, we picked 1/2″ ID latex tubing, #5234K261 from McMaster-Carr.  This tubing has 5/8″ OD and a 1/16″ Wall.  This is a thin-wall latex tubing, which stretches rather easily and is quite easy to fill.  However, this kind of tubing is also commonly available with thick walls of 3/32″ or 1/8″ thick.  Using a thicker wall means (A) that the water weenie will be harder to fill but (B) will be able to propel water further.

Our valve and nozzle are one piece, #45975K61 from McMaster-Carr. That’s a “Miniature PVC High-Flow Ball Valve,” threaded as 1/4″ NPT on one end with a barbed fitting on the other end that we are using as our output nozzle. It’s a really solid piece of hardware that feels great in your hand. The valve opens in half a turn and is even easy to open one handed. The nozzle end is internally smooth and gives a very even stream, roughly 3/16″ in diameter. You might consider a similar valve but with smaller output diameter for higher stream velocity, or larger output diameter for higher flow volume.

As the valve and nozzle assembly has a female threaded port on one end, we also needed a barbed tube fitting with a 1/4″ NPT thread on one end, #53055K215 from McMaster-Carr.

Cable ties
We used standard heavy-duty cable ties for securing the two ends of the tubing, as we’ll discuss in the next section.

Stopper
There are any number of ways to fill a water weenie. The most efficient method would be to add a separate large-diameter fill port behind the nozzle valve— possibly just another ball valve at the tail end of the tubing.  We opted for a simpler method, to just stick a rubber stopper (with a through-hole) on the end of the nozzle and to jam that into the end of garden hose.

Aside: The inner diameter of the “male” end of a garden hose tends to vary a bit, but we believe that a #4 stopper would be just about right.  Unfortunately, all that we had lying around was a #5.5 stopper, so we had to use a F-F adapter on our hose end as you’ll see later. 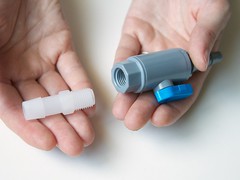 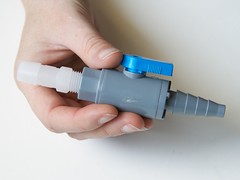 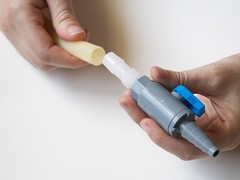 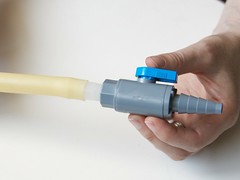 Slip the tubing over the barbed fitting.  This will take a bit of effort, but slide it up as far as it will go. 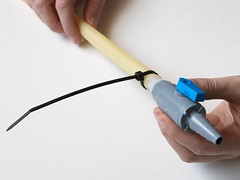 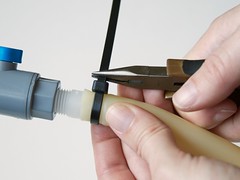 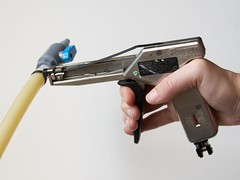 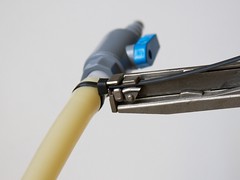 Next, lock the tubing to the barbed fitting with one of the cable ties. It needs to be tight.  You can use a pair of pliers to ratchet the cable tie as far as it will go, or (better) use a proper cable tie installation tool. 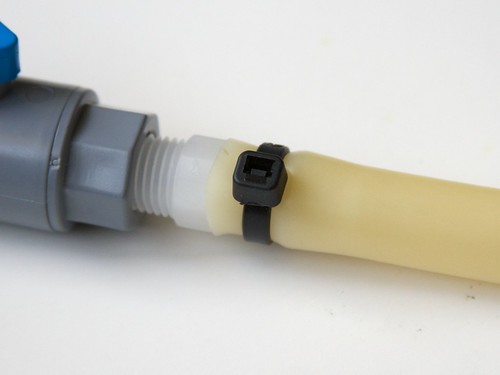 Once tight, trim away the excess end of the cable tie. 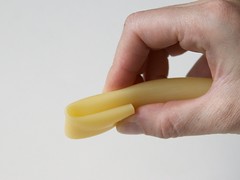 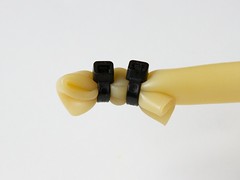 Use two more cable ties to seal the tail end of the rubber tubing. First fold the tubing back on itself to create a crimp in the end, and then fold it over lengthwise to create a circular cross section that can be held down with the pair of cable ties. 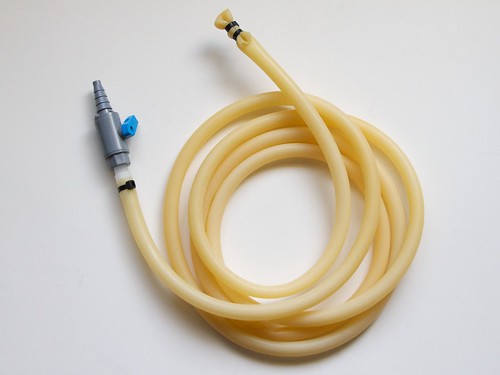 That’s it for the building part of the project, now onto getting some water in there! 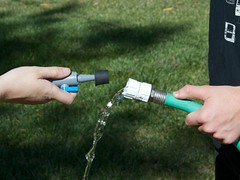 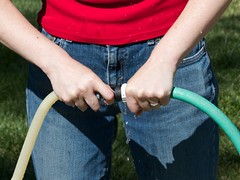 To fill the water weenie, put the stopper on the end, open up the ball valve (such that the handle is in line with the direction of water flow) and press it into the hose end. 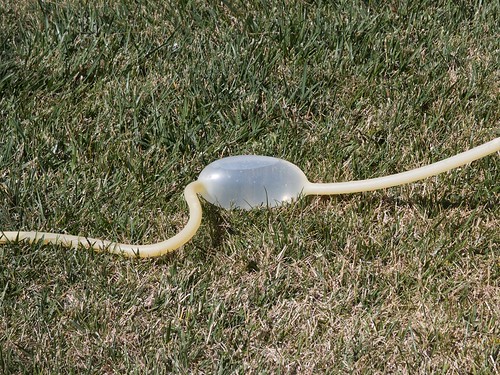 At first the latex tubing will “tense up” a bit and slightly expand in diameter along the whole length.

And then, suddenly, you’ll get the bulge.

While it might look like the tubing is about to burst, it’s actually quite strong. The bulged section of tubing expands to a consistent larger diameter (about 4 inches in diameter for our tubing), and grows noticeably in length. The surface of bulged section feels taut and inflexible— the rubber is actually quite flexible, but here is the part where it is stretched to its limit. 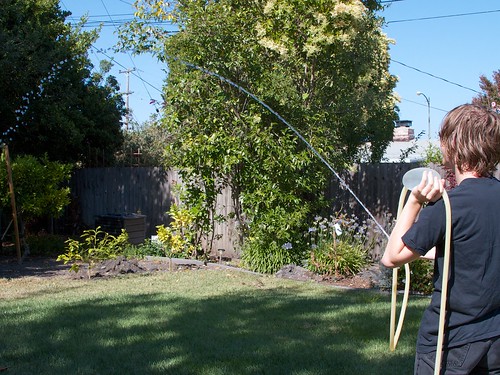 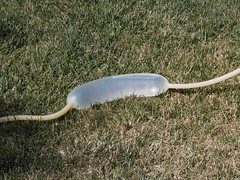 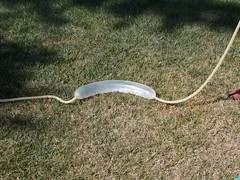 Or, you can just keep filling. The bulge keeps growing as you keep adding water. 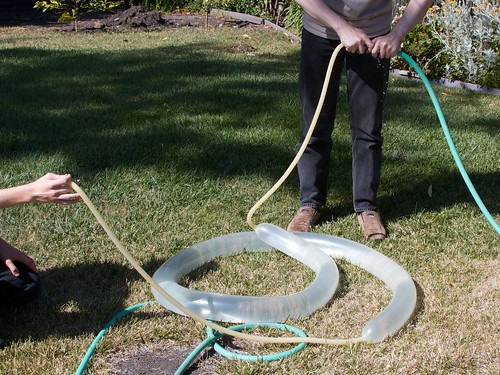 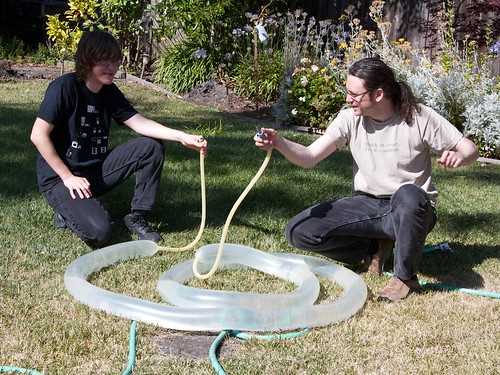 With a larger tube (and a large enough platform on which to transport it), this can scale up considerably. 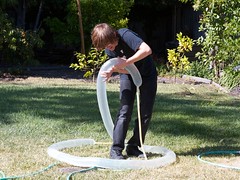 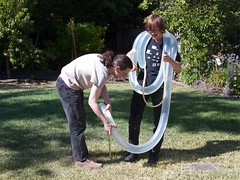 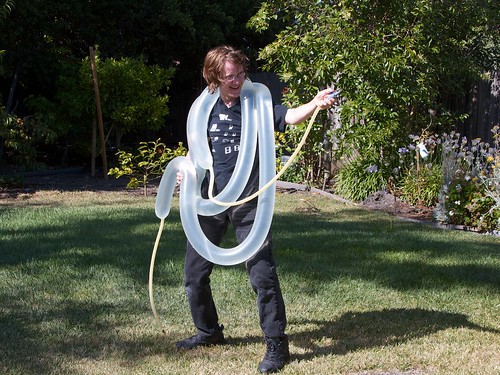 In this case, we were limited chiefly by our ability to lift the darned thing.

The bulged section had expanded to roughly 16 feet in length.  With a 4-inch diameter, that’s about 2400 cubic inches, or 10 gallons of water, weighing in at some 85 pounds. With a reasonably strong back and some assistance, it’s even wearable.

Our original intent for the project has been to fold up the inflated tube within a backpack. As it turns out, that wouldn’t have worked— not only because the bulging tube is so voluminous, but also because it’s likely impossible to coil it into a much smaller diameter.

But no matter:  we’re now ready for summer.

This entry was posted in EMSL Projects and tagged diy. Bookmark the Permalink.

11 thoughts on “Make your own epic-scale water weenie!”