We spent this past weekend in Madera, California at the 2013 Central Valley FRC Regional, a FIRST robotics competition. We went with Firebird Robotics Team 3501 from Fremont High School, who we are mentoring and sponsoring. The challenge of this year’s game, entitled Ultimate Ascent was to build a robot that could compete to score points on a team with two other robots by shooting frisbees into goals and climbing a pyramid structure while defending against an opposing alliance of three robots. The Firebirds named their frisbee shooting robot “Oddjob” after the James Bond villain who throws his bowler hat with lethal results. One of the green-shirted safety advisors at the event was coincidentally named James Bond, and he was a good enough sport to allow us to take his picture with Oddjob. We ran into a robot from team 840 sponsored by our friends at Skallops which had a wonderfully appropriate warning sticker on the frisbee shooter reading “DANGER: DECAPITATION HAZARD.” We’re relatively new to the world of FIRST, which can be almost cult-like, with participants identifying themselves by team number like a code word or secret handshake. A smaller number means a team that was established earlier. Over the last 20 or so years, the organization has managed to channel the enthusiasm of teenagers which is normally directed toward athletes and celebrities instead toward engineering, programming, and building. The teams are fiercely spirited, bringing their mascots and supporters to cheer them on at competitions.  It is truly incredible to see this much energy directed towards a science and engineering event. 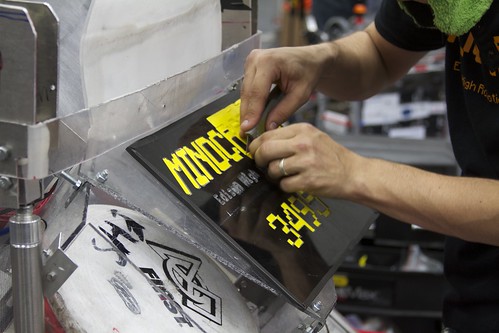 Robots are awarded more points for goals scored during autonomous play, and the highly competitive field is steered toward collaboration and mutual assistance by the alliance aspect. The teams work hard to make sure that their robot will be an asset to any alliance in the hopes that even if they don’t rank highly enough in qualification rounds to be a team captain themselves, they’ll be chosen by one of the alliance captains and advance to the finals. They actively share tools and materials with the other teams, as any of the other robots could be on their alliance during a given match. Parts request announcements in the pits are filled almost as soon as they are announced, although when we heard “Team #### needs an FTL drive” over the PA, we could only laugh.

One of the more visible ways we were able to share was with our yellow gaffers tape, which team 3495 used to make their engraved sign stand out with their team color. We were the beneficiaries of parts, too, with another team generously sharing a metal shaft when one of ours bent during a match. The teams are typically student driven, with mentors playing an advisory role, supporting the students as they work through problems of design, mechanics, building, programming, and team dynamics. The students work incredibly hard to design and build the robot during just six weeks allowed as the “build season,” and then during the competitions fine-tune, fix, and improve their machine. Even the mascot works just as hard on the robot as everyone else. Through a combination of determination, hard work and luck, our team came out of the qualifying rounds with the top ranking, and then made it all the way to the final game of the elimination rounds, with their ally teams 3970 and 2643. However, our friends from team 840, along with allies 295 and 1678 bested us to win the finals, 2 matches to 1, earning a spot at the championships.

Besides strict competition, there are additional awards and honors are given at these events to recognize technical ingenuity, good design and spirit. Our team received the Judges award, which was summed up rather accurately by one team member as being the award for “general awesomeness.” Congratulations to all of the participating teams, every one of which pulled off building a robot that could play an incredibly challenging game! Our team is headed next to the Silicon Valley Regional event April 4-6, but there are events every week all over the world leading up to the championships April 24-27 in St. Louis. All events are free and open to the public, so get out and cheer on your local robots!

If you have a chance, find a way to mentor, sponsor, or otherwise volunteer to help out your local robot team or competition.  FIRST, and its several associated programs directed at younger students, are some of the best ways that we have to inspire youngsters to pursue careers in science and engineering.  And that’s something that benefits us all.