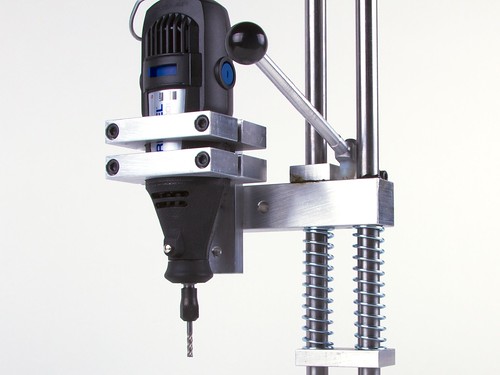 While in the course of a recent project, we ended up needing a machine to perform a particular operation. The operation was one that falls squarely into the (rather narrow) set of things that you would expect a “Dremel drill press” to be ideal for. And so (1) we got one, (2) found that it wasn’t very good and then (3) found an excellent alternative: The Drill Press Plus by Vanda-Lay Industries. 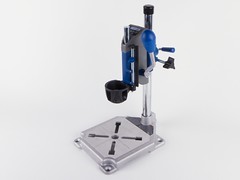 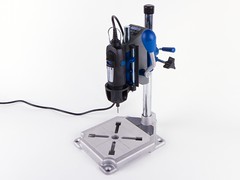 First off, what’s up with the Dremel version? The model 220-01 Workstation is Dremel’s current drill press offering. And while it is inexpensive (~$45) and basically functional, it leaves a lot to be desired. To be specific, precision. 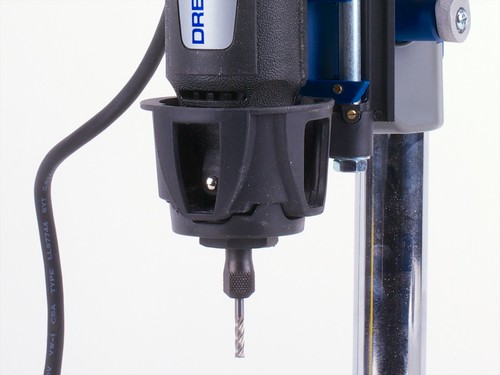 The first issue is that the Dremel tool is affixed to the Workstation at only one place, which is the wide-diameter hex nut visible just above the collet nut that holds the tool. You can see that in the photo above, about 1/3 of the way up. The mount is made of semi-rigid plastic, and has a long lever arm to the main vertical shaft. Consequently, the Dremel tool flexes (rotationally) quite a bit about that mounting point, leading to both position and angle variation in any hole that you might want to cut. 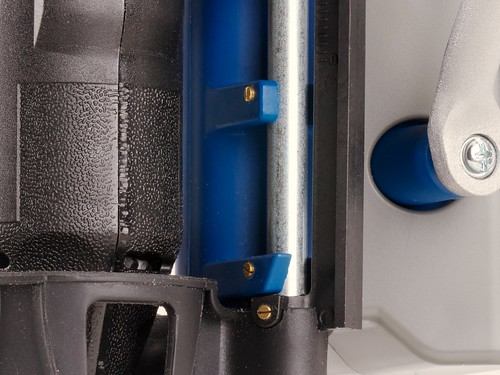 The second issue is that the vertical sliding mechanism is poorly designed, which leads to a lot of horizontal slop in the machine.  The vertical slide consists primarily of an unground steel rod, constrained by two brass set screws that are set into semi-rigid plastic fingers.  The combination of the rough rod and the plastic fingers is particularly poor: Either the set screws are loose enough that the travel is smooth but the motion is very sloppy, or they are tight enough that there’s little (but still some) slop and the travel is overconstrained.

The Vanda-Lay Industries Drill Press Plus 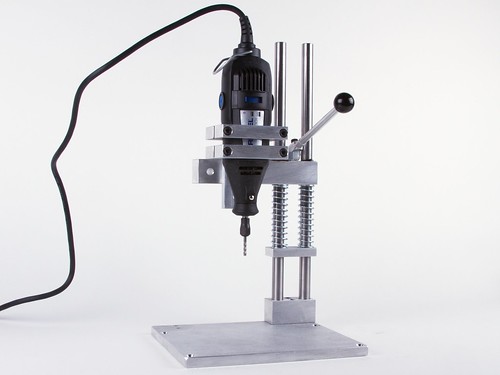 Certain that there was something better out there, we searched for, found, and ordered the Drill Press Plus ($119 + S&H) from Vanda-Lay Industries, which showed up just a couple of days later. The Drill Press Plus is exactly what we had hoped the Dremel Workstation would be: a simple, reasonably precise, and solidly built drill press for rotary tools.

The Drill Press Plus is made of machined aluminum, with 1/2″ vertical steel shafts, and springs included. It is also a very simple machine. For example, rather than using a rack and pinion for the vertical feed travel, there is a simple cam mechanism whereby the lever itself presses the arm down.

Vanda-Lay makes a number of similar machines (such as the Acra Mill Plus) based on the same basic platform, and that seems perfectly credible, based on what we’ve seen. This machine has reasonably good rigidity and low slop for a machine its size, thanks to solid construction. (It’s no Bridgeport mill, but of course it only weighs a few pounds, not a few tons.) 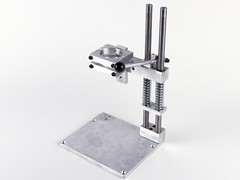 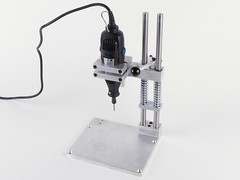 One of the things that it does very well is to clamp the rotary tool solidly about its midsection with not one, but two solid aluminum clamps. 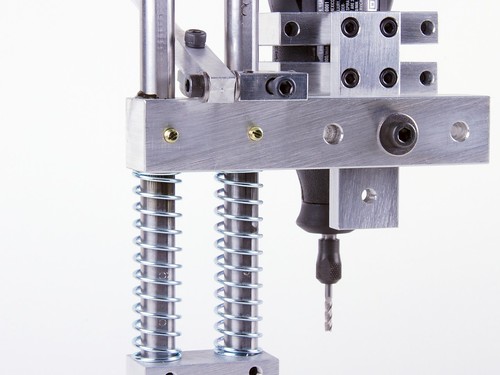 There are a few little things that we would recommend as ways to improve yours, once you get it.  First (and foremost), you need to grease the shafts.  The steel shafts slide in plain-bearing holes cut in the aluminum, which are excellent tight-tolerance guides, so long as they are greased. If you don’t grease them, they don’t really slide.

Second, you might consider what we did, and add two set-screw style threaded ball-end spring plungers,10-32 x 1/2″ long with stainless steel roller balls to the help constrain the shafts. These go into the threaded holes meeting the flat side of the D-shafts on the Z-arm, and are visible as the two brass-colored screws.  These take out what little slop is left in the vertical feed motion. 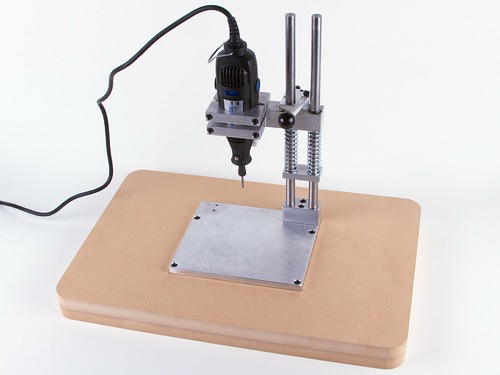 Third (and slightly more so than the Dremel version) the Drill Press Plus really wants to be bolted down to a table to have enough mass and stability to work well.  The included aluminum base plate is nice, but not quite wide enough or massive enough to hold it in place while you use the tool.

Since we didn’t want to permanently take up bench space with it, we cut out and bolted it to a heavy, wide platform, made of two ¾” thick pieces of MDF glued together. That turned out to work incredibly well, allowing us to set it on any bench when we need it, and use it there.

This entry was posted in EMSL Projects, Engineering, Reviews and tagged tools. Bookmark the Permalink.