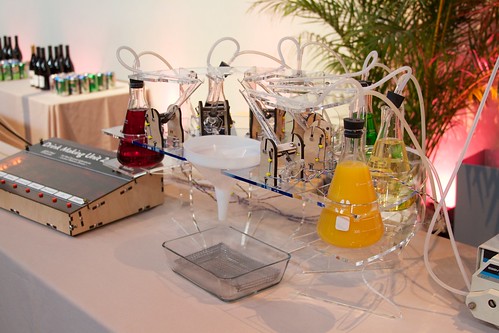 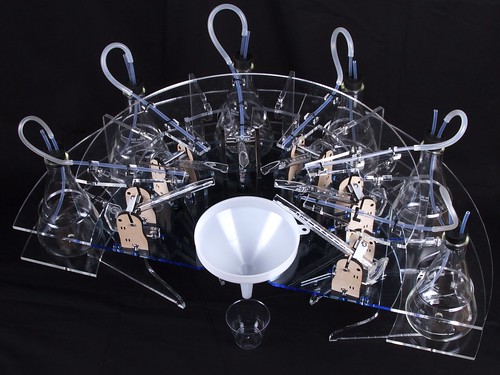 A little background: cocktail robotics is a peculiar sub-field of robotics, where the goal is generally to prepare beverages (alcoholic or otherwise) by automated processes, where bartender-grade showmanship and presentation count far more than efficiency. (You can read more about cocktail robots here and here.)

In 2011, we introduced a cocktail robot named Drink Making Unit 2.0, which we brought to that year’s BarBot exhibition. DMU 2.0, as it is affectionately known, was built out of laser-cut acrylic, fitted with chemistry labware (including six each erlenmeyer flasks and graduated cylinders), and driven by a user-operated control panel that lets each person decide how they would like their drink mixed, from a set of six ingredients. 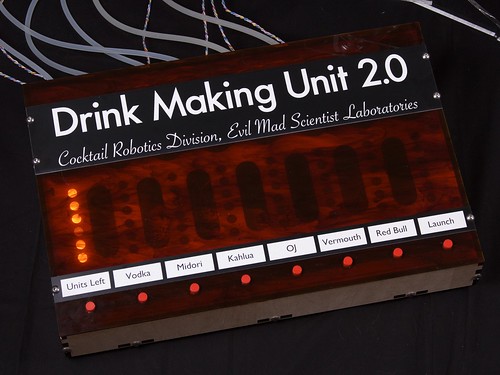 Typically, the set of six ingredients consists of vodka and mixers, but the nameplates on DMU 2.0 are interchangeable, so it can be used just as easily with nonalcoholic ingredient sets such as an array of different juices, lemonade and flavorings (such as raspberry, strawberry, cherry, and mint), or italian syrups for topping snow cones or making italian sodas.

The way that DMU 2.0 works is that little air pumps inside the controller box push air into the flasks, that then push out their fluid contents into the graduated cylinders.  When a given cylinder is full enough, it tips over, dumping its contents into the funnel, which fall into the waiting glass below, in a mechanism inspired by the deer chaser in a Japanese garden. 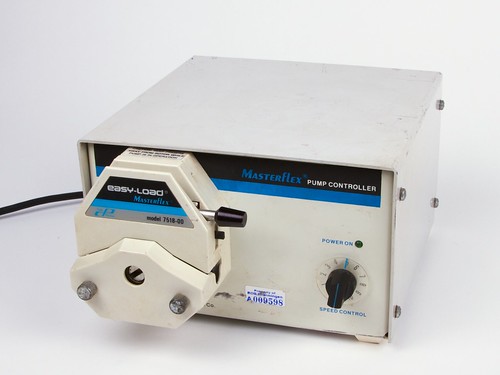 For the upgrade, we decided to add the option to also use a seventh “main” ingredient, that is pumped separately from the other six. Not only does this give the option of holding one more ingredient, but it can also logically separate the “carrier” ingredient if there is one.

It’s easy to see why you might want to do this: If you’re making italian sodas, we can pump a fixed quantity of club soda, yet allow the person who will be drinking the soda to select the mix of the flavoring syrups.  Similarly, we can use a set of lemonade and six flavors, or with the vodka based ingredient set, vodka plus six mixers.

And for the seventh-ingredient pump, we continued with the chemistry lab theme, although at a bit higher level.  We picked up this fine peristaltic pump at one of our local surplus shops, labeled with a sticker that said “works.” 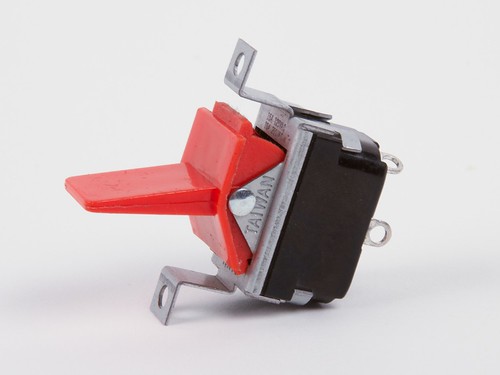 We also needed a switch so that you can disable the “main” ingredient.  (For example, to allow the same setup to make both italian sodas and snowcones, or to disable the vodka in the mixed-drink setup.)

We wanted our switch to be appropriately satisfying to use, and we found an old surplus switch that fit the bill– it’s a lot like the type found on some older desktop computer power supplies. It’s big and red and makes a satisfying “clunk” when you flip it. 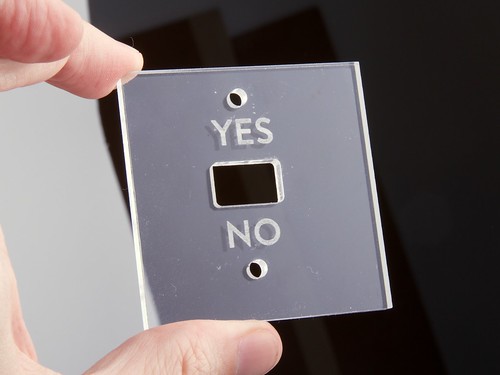 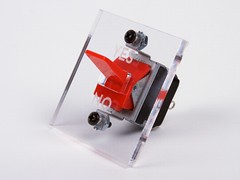 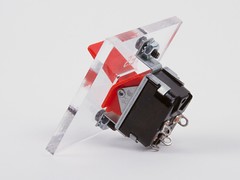 Because of the way that the switch rocks, we did not actually need that big of a cutout.  We made a little test fixture to try it out and see how it would look, to prepare for cutting a hole in the front panel. 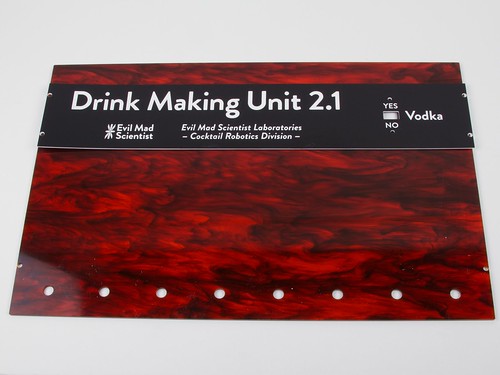 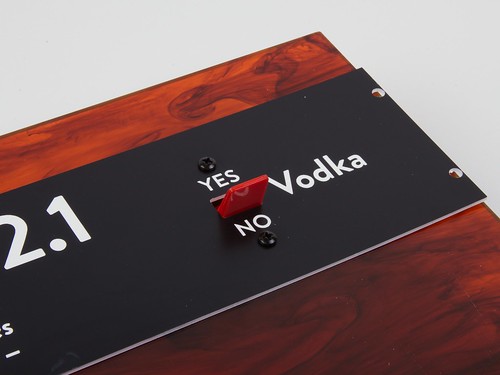 And then, we cut the new hole in our tortoiseshell-plastic front panel, made a matching label plate, and installed the switch. 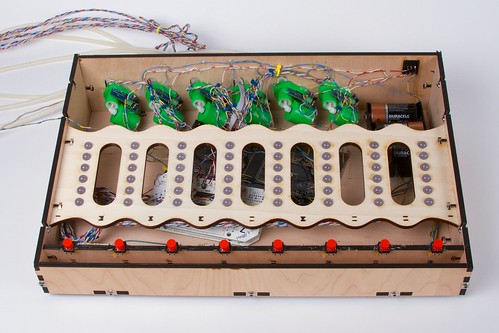 We made a few other (less visible) changes under the hood of the controller.

First, we upgraded the air pumps. In the original configuration of DMU 2.0, three of the six air pumps were piston pumps, and the other three were diaphragm pumps. (You can see how that looked here.) At the time, we considered them to be interchangeable. However, after two years of occasional use, we have found the diaphragm pumps to occasionally have trouble starting, presumably due to degradation of the rubber diaphragms.  The piston pumps have consistently worked well.  So, we replaced the diaphragm pumps and now have a neat array of six green piston pumps.

We’ve also changed the power supply configuration.  The controller box runs entirely on battery power.  Previously, we had two D cells to operate the pumps, and three AA cells to operate the controller circuitry. It turns out that the motors seem to operate just fine at 4.5 V, so we’ve removed the AA cells, and standardized to run the entire box (motors, LEDs, and control circuitry) all from one set of three D cells. 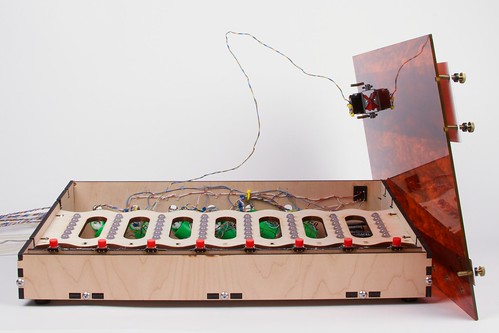 Here, you can see the new input that connects to the front panel 7th channel switch. 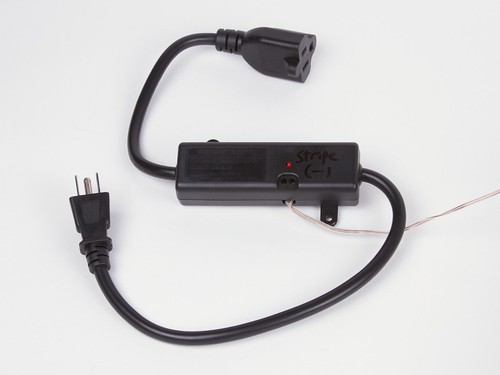 And finally, we added an output that goes to a Power Switch Tail, so that our controller box can easily control the peristaltic pump for the 7th channel.

We’re still using those warm white candle-flicker LEDs, underneath the tortoiseshell plastic— it gives quite a remarkable anachronistic look and feel to the box. 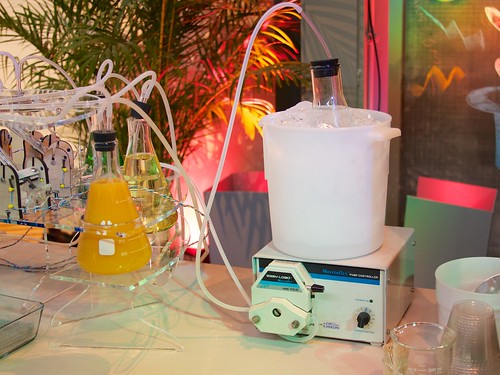 On the other side of the robot, we have the peristaltic pump.  The seventh ingredient (vodka, in this case) sits in a 1 liter erlenmeyer flask, in an ice bucket atop the pump. 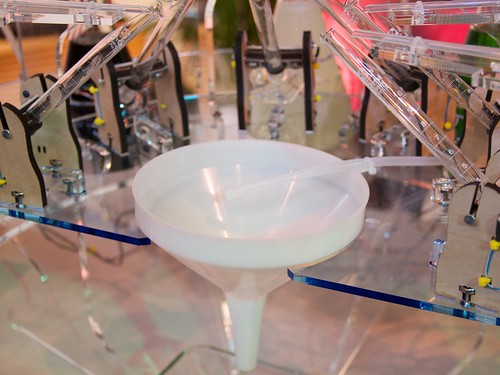 The other end of the silicone tubing coming from the peristaltic pump is directed right into the output funnel.  This lets us “wash” the funnel as it goes, keeping it clean for everyone and making better drinks. 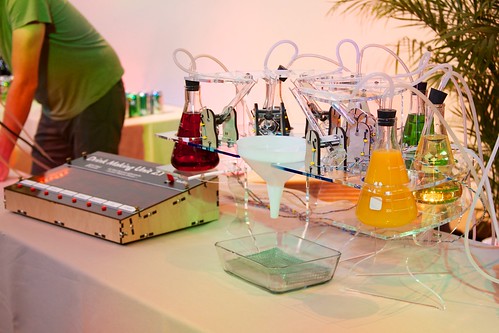 And that’s Drink Making Unit 2.1, now field-tested and ready for the next couple years of cocktail robotics adventure.