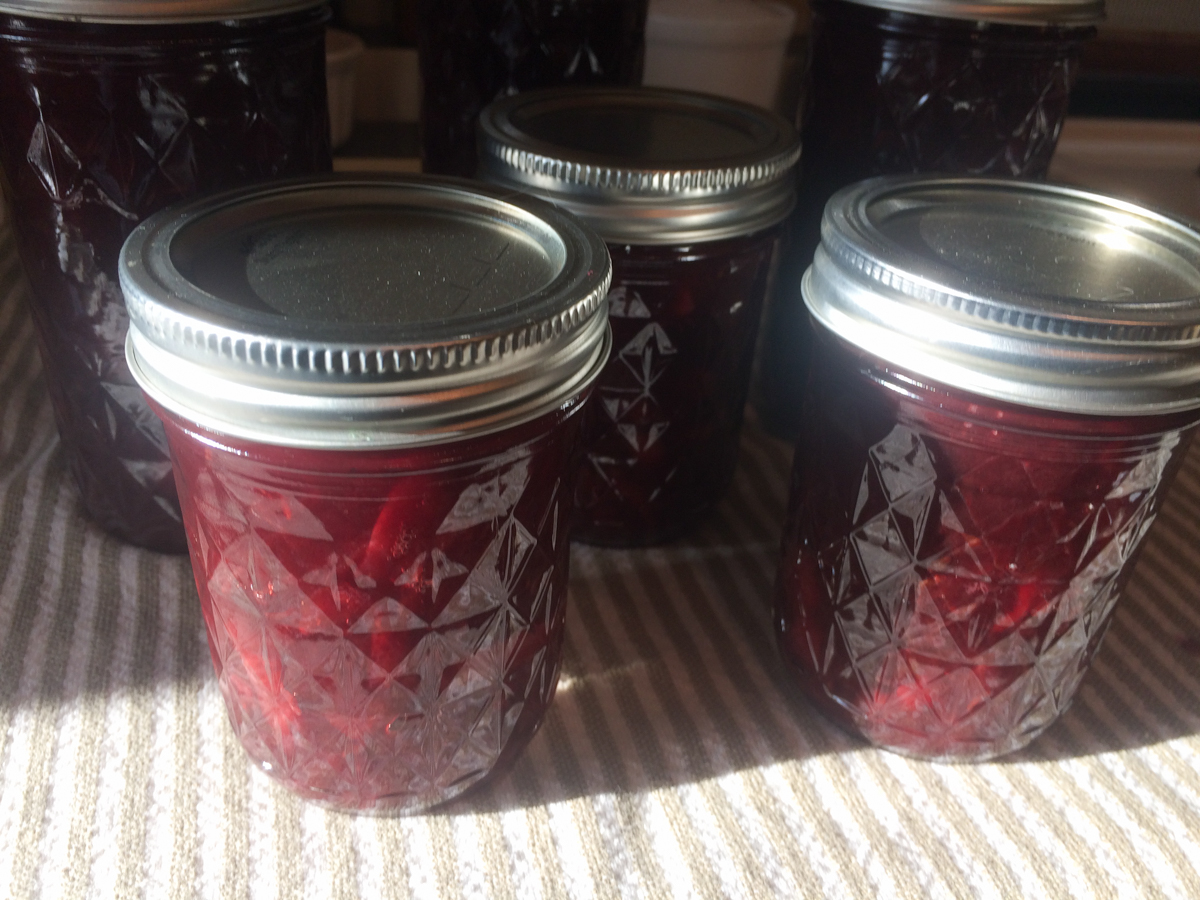 I’ve been using my Plum Chutney recipe for years and enjoying every batch. Our own plum tree is now mature and producing lots of wonderful fruit each year, so I have had many opportunities to reproduce and refine my recipe. Here’s my new spicier recipe, with notes below on ingredient changes and other tips I’ve learned over the years.

Throw everything except the sugar in a sauce pot and cook, stirring occasionally, until the fruit starts to soften. Add sugar and cook, stirring regularly, until it thickens to a consistency you like. You can test the consistency by putting a spoonful in a cold dish in the fridge for a few minutes. Remove cinnamon sticks after cooking. You can also follow your favorite canning procedure for longer term storage. Makes about 3-4 pints. 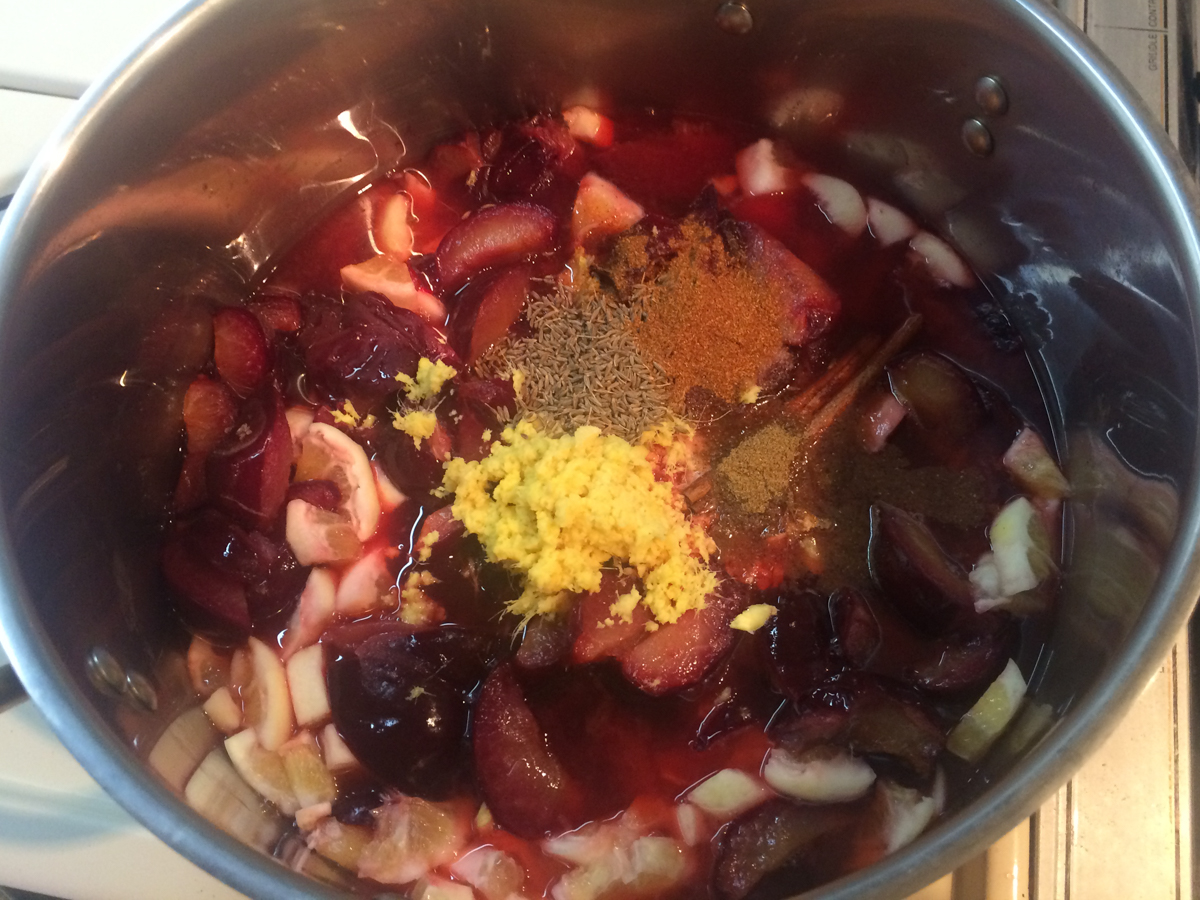 We’ve tended toward more flavor intensity in our cooking over time, and I’ve settled on a version with twice as much spice as before. Sometimes I’ll cut the some or all of the ginger into matchsticks instead of grating it, which results in little bursts of ginger flavor when you’re eating the chutney. If you like that, by all means, use matchsticks! For a more even flavor or consistency, stick to using the microplane. I added a small amount of salt, which makes all of the flavors shine just a little bit more.

I’ve stopped adding water to my preserves. It cooks a little faster without as much liquid, and there’s enough liquid in the lemon juice to get it started cooking even if the fruit isn’t covered. I’ve also started removing the lemon peel for most of the preserves I make other than marmalade. The peel gives it a stronger lemon flavor, and keeps the pectin in the pith from gelling from as well. If you want a thicker consistency, you can leave the peel out. If you want zingier lemon flavor, leave it on. 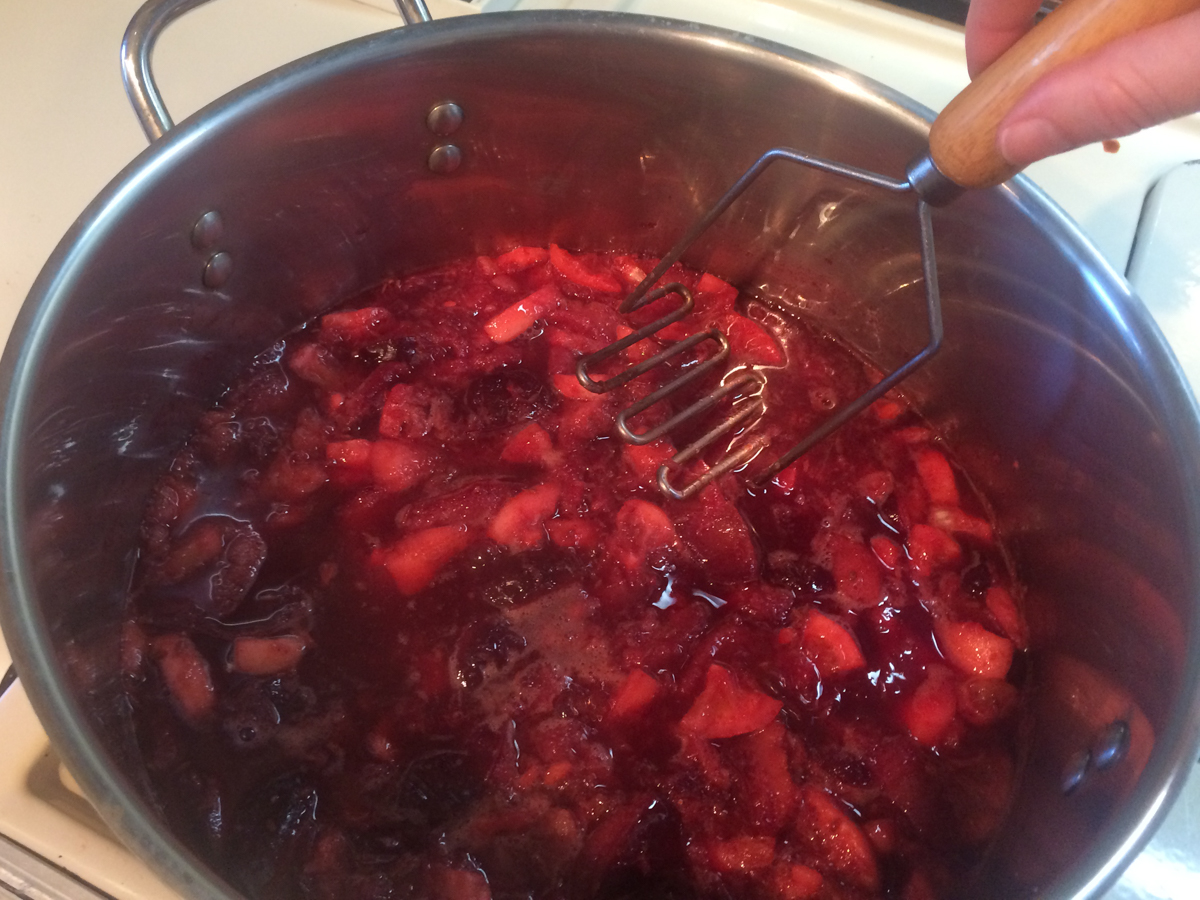 One other consistency related tip: if I want a less chunky consistency, I use a potato masher to crush the fruit pieces early in the cooking. During fruit season, I try to preserve as much as I can by making jams and chutneys, but I usually run out of time and end up cutting up the last of the crop and freezing it. Using frozen fruit for jams seems to work just as well as fresh. The other thing I usually run out of is sugar, because I often forget how much it takes to make preserves, so I started using brown and granulated interchangeably in the chutney. I even used palm sugar once! Which sugar you use doesn’t seem to affect the flavor significantly, so use whichever you have on hand.

This entry was posted in EMSL Projects, Play with your food. Bookmark the Permalink.