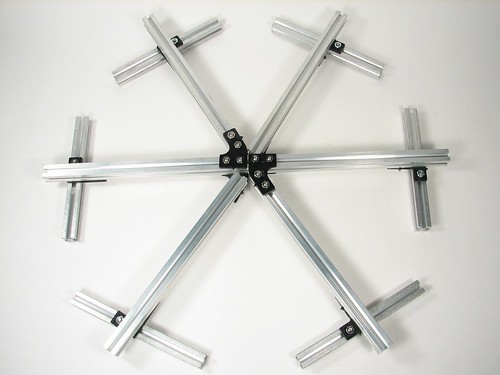 Woo-hoo! We got a box of MakerBeam to keep us busy through the long dark winter evenings. For more info, see their kickstarter page, and the google group. They’ve been busy actually getting stuff made, so we’ll forgive them for not updating much lately. 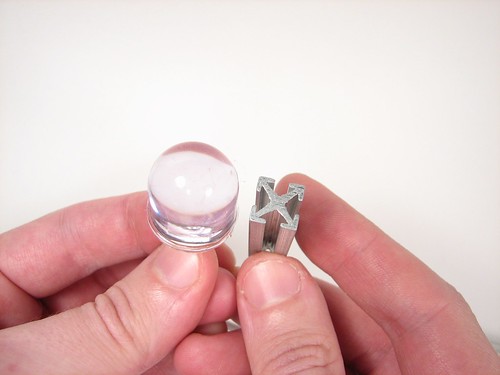 The beam cross section is shown here with an LED for scale.

END_OF_DOCUMENT_TOKEN_TO_BE_REPLACED

This entry was posted in EMSL Projects and tagged makerbeam. Bookmark the Permalink. 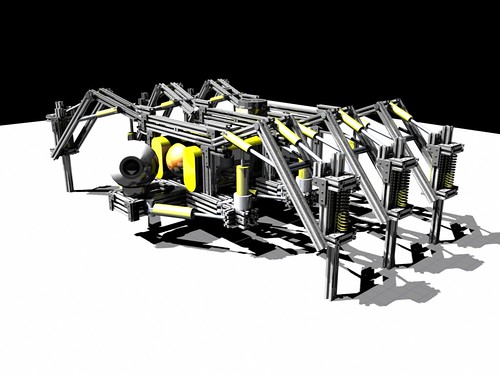 We mentioned MakerBeam in our September linkdump. At that time they had just launched, with the initial goal of raising $10,000 to begin extruding aluminum.

One month later, MakerBeam has just cleared their funding goal, and Evil Mad Scientist Laboratories is very happy to be one of the institutional sponsors that is helping them to get off the ground. Sam Putman, one of the MakerBeam founders, is here to answer some of the what, why, and how questions about this project.

Congratulations on reaching your goal!

Thank you, and thanks for your help! We can’t wait to see what EMSL is going to do with MakerBeam.


Tell us about your project!

Sure! MakerBeam is an open-source metal building system. There’s a technology called T-slot (example here) that is widely used for industrial automation, robotics and machine enclosures.

MakerBeam has defined a standard called Mini-T which is a miniature version of T-slot. It’s small enough to work as a model building system, and precise and strong enough to build real machines and robots with it.
You’ve chosen to do this as open hardware. Why?

Short answer: because we want it to succeed.

The usual model for starting a business like this is to design it, protect your IP, and use the proprietary IP to capitalize the company in exchange for some percentage of ownership. We’re turning that completely around: We are giving our designs away under Creative Commons licenses. To fund the manufacture, we’re offering various rewards to people who back the project, including Alpha and Beta kits for people who want to help us develop and grow. If someone lent us $10,000, we’d have to pay it back with interest or sell some part of the company. By raising the money in pledges, we can satisfy everyone who has pledged without taking a step that puts the project in debt. Since we don’t have to securitize that debt, we don’t have to have restrictive IP. It’s a win on top of a win. Also, we’re making components, like nuts and bolts or polished rods. We want people to use them without restrictions, and not be concerned that their supplier might change terms or go under. Anyone can extrude their own Mini-T, so the only way it’s disappearing is if the demand for it ceases.
Tell us about Kickstarter.

I love the Internet because it provides us with disruptive technologies faster than I can really process what’s happening. I wake up one morning and Wikipedia has gone from being an interesting experiment to the fount of all knowledge, or Facebook has found all my old high school friends for me, or Twitter has given the planet a short-attention-span nervous system.

Kickstarter is like that, and it’s just the beginning. The model is simple: creators put up projects, with a funding goal and time limit. Pledgers back projects in exchange for whatever rewards are offered, and if the goal is reached within the time limit, everyone’s accounts are charged and the project is funded. If not, no risk, no worries, no charge. So we put up a pledge page (link), got the word out, and now we’re going to be doing the project. Simple as that. This is game-changing in more ways than I can cover here, and once Kickstarter opens project creation to everyone, I think we’re going to see a massive migration of creativity, particularly in the arts, to Kickstarter. How about open source projects?

Kickstarter and sites like it will make a huge difference for the FOSS movement. There must be thousands of projects that people would build if they could cover expenses.

A great example of what’s possible: someone builds a new piece of hardware, let’s say a controller, and publishes the schematics and some video of the controller in action. They could put the project on Kickstarter and raise the funds to have it manufactured. The key to making this work is to remember that your backers are investing in your project, but that the returns aren’t monetary. They are going to want to be involved and to get something that no one else will have. I think the best thing an open source project can offer is a chance to be involved in development. By offering Alpha and Beta kits, we’re giving people a chance both to play with the beam early and to help us develop everything that goes with it. A software project, for example, might be ready for Kickstarter when it has working code and an arm-length list of features that could be added. Backers who contribute significantly could pick the features the developers will concentrate on, while smaller contributors get a serial-numbered 3D print of the project mascot for their desk. We’re actively getting invites into the hands of open source developers, so if you want one, get in touch. [You can reach MakerBeam here.] How do you see MakerBeam fitting into the open hardware ecosystem?

We’ve pictured it from the beginning as a basic component. The design is tweaked to allow circuit boards to slot right into the sides, which makes building simple enclosures easy. In general we think reaching into the box of MakerBeam is going to be a good first step in prototyping most stuff under two feet on a side.

We’re especially excited about collaboration with people working on robotics and CNC. We’re shipping an institutional kit to oomlout in the UK, which does awesome open-source robotics out of mostly laser-cut acrylic, and of course we’re hoping EMS finds MakerBeam useful in developing the CandyFab and everything that goes with it. We really hope this will release a lot of creative potential. The world of open hardware is blessed with an ever-growing array of sensors, precision servos and stepper motors, and controllers. When it comes time to make that into a robot, people are still reaching for the LEGO or cutting stuff with a laser. With MakerBeam they can just bust out an Allen wrench and get straight to work. Thanks, and congratulations again!

Thank you! Our Kickstarter round (link) is open for another 10 days. Alpha kits are all sold, so the only way to get beam by Christmas is the institutional level. Beta kits ship in February and we’ll have those until pledges close.

We are aiming to sell to the public beginning at Maker Faire 2010 in May. We’re stoked and excited to see what people are going to build.
This entry was posted in EMSL Projects, Open Hardware and tagged makerbeam, open source. Bookmark the Permalink.