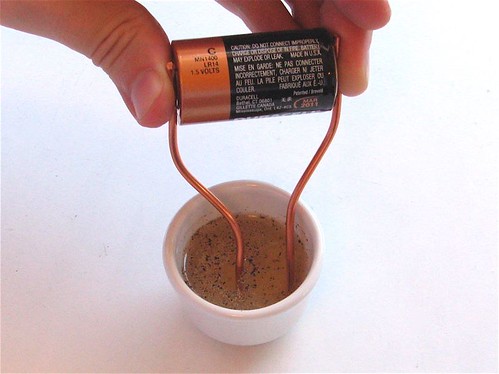 Rember the silent caterpillar drive from the movie The Hunt for Red October? The caterpillar drive was a fictional magnetohydrodynamic propulsion system. Magnetohydrodynamic (MHD) propulsion is a means of using electrical current, instead of a noisy propeller, to push a ship through the water.
Surprisingly enough, a working example of this futuristic drive system is quite easy to build. Assuming that you’ve got the materials handy, you can build one in about a minute. You’ll need a strong magnet, two pieces of thick copper wire, a little dish of warm water, salt and pepper, and a regular battery.

[This is the first in a series of three articles on building simple magnetohydrodynamic (MHD) propulsion systems.] 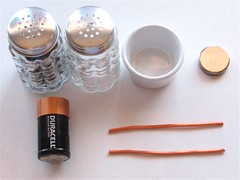 The ingredients: Salt and pepper, a little dish that we’ll put water in, two pieces of thick-gauge copper wire, a battery (just about any type), and a strong magnet.Use thick copper wire here because thin wire will get very hot and burn your fingers. The best type of magnet to use is a neodymium disk magnet, but just about any strong magnet will work. Note that magnets from hard drives are not the best choice because they usually have both poles on the same face of the magnet. 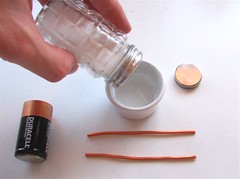 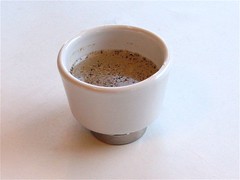 Pour a little water in the dish and stir in some salt and pepper. The ideal depth of the water is about 1/4″, but it’s not critical (it’s about a half-inch deep in the photo). Mix up the water so that the pepper doesn’t all float on the top. Set the dish of water on top of your magnet.

Why salt and pepper? MHD propulsion relies on conducting current through water. Water is normally a poor conductor, but salt water is a great conductor. Adding the final dash of pepper makes it so that you can see when the water moves. =) 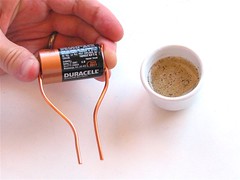 Bend the wires as shown, so that when you hold the wires against the battery, the ends are a couple of centimeters apart. Don’t let the two wires touch! 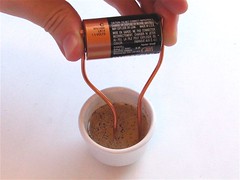 Important safety tip: You’re dealing with electricity and salt water; use some common sense. Small quantities of potentially poisonous and/or explosive gasses may bubble out of the water; don’t try and scale this up unless you really know what you’re doing. Besides that, copper wires can have pointy ends and magnets can pinch you.

OK, so how the bleep does it work?

Last month we showed how to make a homopolar motor, which is the oldest and simplest type of electric motor. In the example motor that we made there, a magnet hanging on a screw is spun up to high speed. Here, we have constructed a magnetohydrodynamic “motor” that spins salt water. The dynamics of these two systems are exactly equivalent; both are fundamentally examples of homopolar motors.Michael Faraday‘s original 1821 homopolar motor was somewhere between these two examples. Rather than using a rotating magnet, he used a pool of liquid mercury (an excellent conductor) sitting atop a magnet. In his Popular Science column this month, Theodore Gray recreated that original motor, using a genuine pool of mercury. Among the different designs that have evolved from that original are those (like the one with the screw) that rotate a mechanical object, but also the magnetohydrodynamic version, which can propel a ship through the ocean.

Sure, you say, but how does it work? Let’s back up for a moment and first look at how the (rigid) mechanical homopolar motor works. For the sake of concreteness, we’ll use the example of the motor that we wrote about previously.

A simple, “rigid” homopolar motor. Electrical current flows in the direction indicated by the purple arrows: from the bottom end of the battery, down the screw, through the magnet, up the wire, and back to the top of the battery.(By the way, I made these drawings in POV-Ray. Someday, I’ll put the rest of my tutorial on line.) 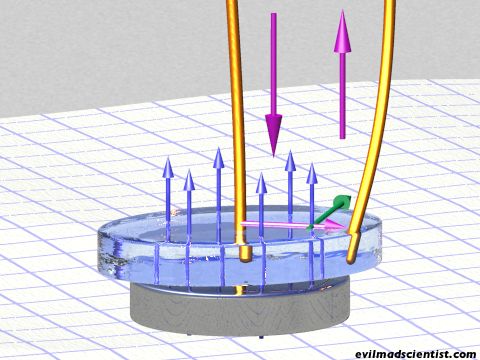 In the magnetohydrodynamic motor, we place a container of conductive salt water directly above the magnet. The situation is essentially the same as in the previous illustration; the only significant force arises where the electric current flows horizontally, that is, in the direction perpendicular to the magnetic field. Since the current is now flowing through the water, rather than the magnet, the resulting Lorentz force is applied to the water, not to the magnet. And indeed, the water begins to spin.

This entry was posted in EMSL Projects, Science and tagged mhd, science. Bookmark the Permalink.

34 thoughts on “MHD I: Demonstrate Magnetohydrodynamic Propulsion in a Minute”