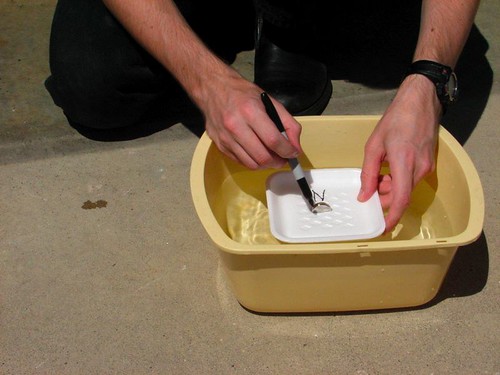 When I was a kid, I read in a science book about how to make a directional compass. You magnetize a sewing needle and balance it on a cork floating in a bowl of water. Even today, this is the standard story. For example, How Stuff Works still says that this is how to make a compass. (There are a lot of other examples, too.) It turns out that it’s a whole lot easier than that. All you need is a really good magnet.

I stumbled across this trick quite by accident last week. For reasons that are– believe it or not– genuinely not related to compasses, I was attempting to balance a magnet on a little foam tray floating in a pan of water. However, the magnet wasn’t behaving itself. It kept pulling its little boat to the edge of the pan of water. None-too-careful inspection of the situation revealed that there was a ten-inch steel chef’s knife sitting on the kitchen counter where I had set the pan of water. ( Doh! If you’ve spent any time playing with strong magnets, you may also have had some of those close calls where your magnet and the nearest sharp knife go flying at each other. It only takes a couple of those experiences to give you a sinking feeling every time that you see a magnet and a ferromagnetic pointy thing within a foot of each other.) Moving the knife away stopped the magnet from drifting to the edge, but it still was turning on its own. Of course, that’s when it dawned on me that I was looking at… a compass!

I had read a few times about making a compass with a supermagnet. I had seen it on Bill Beaty’s Science Hobbyist site, as well as at Forcefield. Come to think of it, I had actually once tried one variation of this, which is to hang neodymium magnets on a string and watch them turn to align themselves. It works, but a string is actually a poor torsion bearing and the result is roughly as uninspiring as the floating-sewing-needle version. Since I myself was trained in the slowly-moving-magnetized-sewing-needle school of compass design, I didn’t think that making compasses was sufficiently interesting to spend more time on. But, that’s the difference between seeing it and just reading about it.

The first thing thing that you will need is a rare earth magnet, preferably a neodymium disk magnet. For this and most other purposes, the most efficient magnet geometry is where the thickness is comparable to the diameter. That magnet that I used was part number ZD4 from K & J Magnetics, it’s one inch in diameter by a quarter-inch thick, and made of N48 grade (strong) neodymium-iron-boron, and cost about $5.

Note that hard drive magnets are usually not useful for making a compass because they will have both poles on the same face of the magnet. 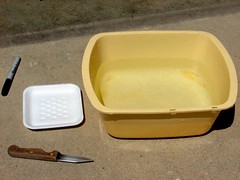 To make a floating magnet we’ll need some other things: A tub of water, a foam tray, a knife, and a permanent marker. Keep the magnet separated from the knife. 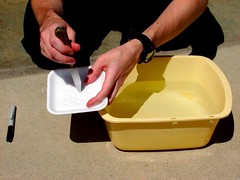 Using the knife, make a slit in the foam tray. 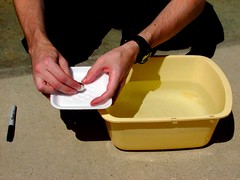 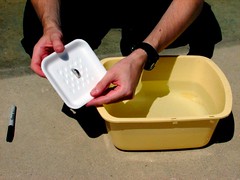 Shove the magnet into the slit. It should seat firmly in place. 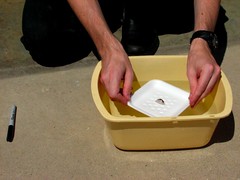 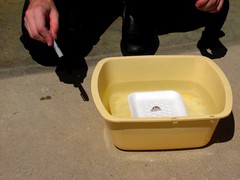 Set the tray in the tub of water.
The compass rotates until it’s happy, which will take about one second. 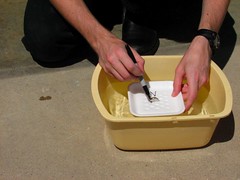 Calibrate your compass by labeling the end that is pointing North (that’s the north pole) and the one that’s pointing South (that’s the south pole of the magnet). If you are presently lost and are planning to use this to find your way home, you’ll need some external reference, e.g., the direction of sunset. 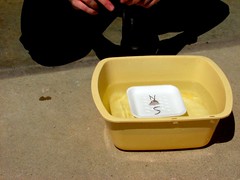 I made a short video (on YouTube) showing exactly this set of steps.

A simpler-yet compass can be “made” by simply setting the magnet down on its edge on a smooth surface. (Not really making, is it?) You can watch a short video of that as well. While it’s simpler, it isn’t quite as impressive because (1) there’s nothing to construct, and (2) it doesn’t move that giant foam tray around.

Now get busy! Assuming that you’ve got a decent magnet laying around, it should take you less time to try this out than you’ve spent reading this article. If you’ve only got a tiny supermagnet, consider building this version presented by Will on Instructables.

Once you have built even a single supermagnet compass, you will have the personal blessing of Evil Mad Scientist Laboratories to refer to any method of making a compass that involves magnetizing sewing needles as “the wuss method.”

This entry was posted in EMSL Projects, Science and tagged diy, magnets, science. Bookmark the Permalink.