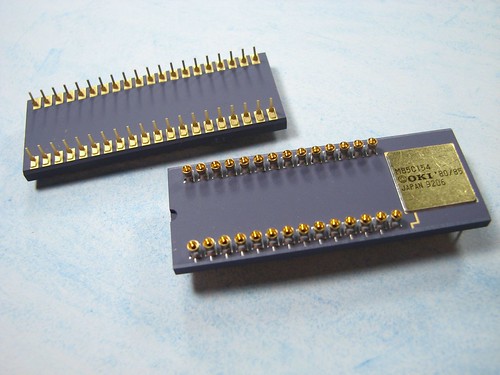 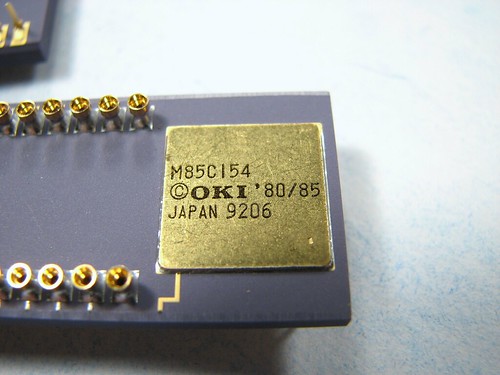 Check out these neat chips that I picked up at a Silicon Valley junk shop.

They’ve got pins on the bottom and a socket on top. Wait– what?!?
Ever seen anything like it? Me neither. (Or, if you have, let’s hear your story in the comments!)

This IC is an M85C154 from OKI. While it’s an “old” device (old in computer years), you can still find the datasheet from various sources of varying mediocrity.

The M85C154 is an 8-bit microcontroller in a “piggyback” package that allows you to add an external 16 kB EPROM memory chip to store the program memory for the chip. This was never a real mass production device, but rather an tool to help engineers try out new microcontroller programs without using up a chip each time.

Here is how it would work: An engineer would write a program on their computer, write it onto the EPROM, plug that into the piggyback socket of the microcontroller, and test it out. To change the program on the chip, the EPROM would be removed, erased, and reprogrammed. (Erasing these is actually an annoying process– so most often a pile of blank EPROM chips would be used, and all erased as a batch at some point.) After everything was working well, the program could be instead written directly into “production” microcontrollers that have integrated write-once memory but no socket.
While this device is only fifteen years old (and they were made at least as recently as 1998), it is still a relic because new-generation microcontrollers use integrated “flash” memory that can be reprogrammed over and over again without much difficulty. Still, it’s a neat find, and an unusual looking chip.

This entry was posted in Everything Else, Microcontrollers. Bookmark the Permalink.

21 thoughts on “A funny looking chip”