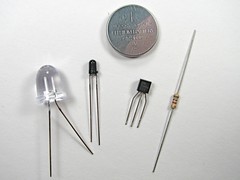 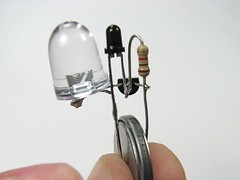 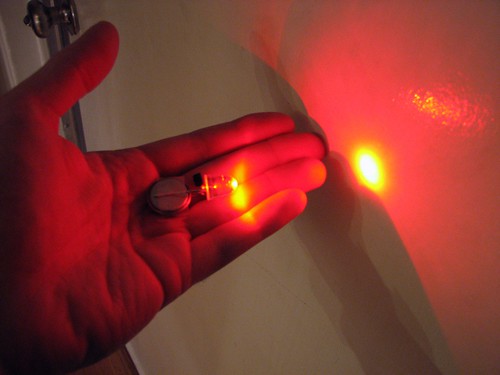 Here’s a simple problem: “How do you make an LED turn on when it gets dark?” You might call it the “nightlight problem,” but the same sort of question comes up in a lot of familiar situations– emergency lights, street lights, silly computer keyboard backlights, and the list goes on.

Solutions? Lots. The time-honored tradition is to use a circuit with a CdS photoresistor, sometimes called a photocell or LDR, for “light-dependent resistor.” (Circuit Example 1, Example 2.) Photoresistors are reliable and cost about $1 each, but are going away because they contain cadmium, a toxic heavy metal whose use is increasingly regulated. There are many other solutions as well. Look here for some op-amp based photodetector circuits with LED output, and check out some of the tricks used in well-designed solar garden lights, which include gems like using the solar cell itself as the sensor. (Our own solar circuit collection is here.)

In this article we show how to build a very simple– perhaps even the simplest– darkness-activated LED circuit. To our LED and battery we add just three components, which cost less than thirty cents altogether (and much less if you buy in bulk). You can build it in less than five minutes or less (much less with practice).

What can you do with such an inexpensive light-controlled LED circuit? Almost anything really. But, one fun application is to make LED throwies that turn themselves off in the daytime to save power. Throwies normally can last up to two weeks. Adding a light-level switch like this can significantly extend their lifetime. 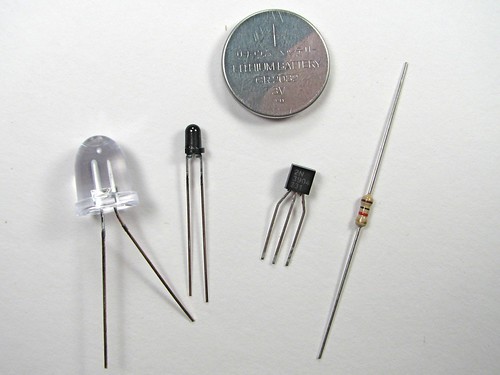 Here are our components: On top: a CR2032 lithium coin cell (3 V). On the bottom (L-R): the LED, an LTR-4206E phototransistor, a 2N3904 transistor, and a 1 k resistor.
This LED is red, blindingly bright at 60 candela, in a 10 mm package. It casts a visible beam, visible for about twenty feet in a well-lit room. We got the LEDs and batteries on eBay, and the other parts are from Digi-Key, but Mouser has them as well. As we mentioned, the last three cost about $0.30 all together, and much less in bulk.

The LTR-4206E is a phototransistor in a 3mm black package. The black package blocks visible light, so it is only sensitive to infrared light– it sees sunlight and incandescent lights, but not fluorescent or (most) discharge lamps– it really will come on at night.

Our starting point is the simplest LED circuit: that of the LED throwie, which has an LED driven directly from a 3V lithium coin cell. (Funny looking example
here.) From this, we add on the phototransistor, which senses the presence of light, and we use its output to control the transistor, which turns the LED on. 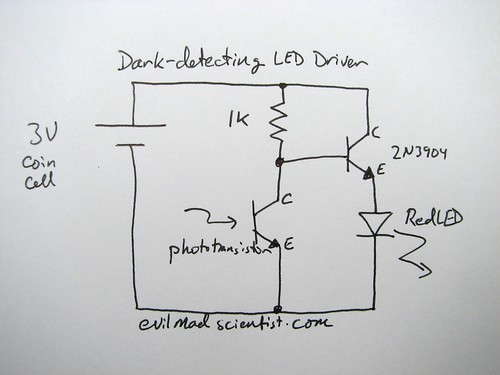 The circuit diagram looks like this; please ignore the messy handwriting. ;)

When light falls on the phototransistor, it begins to conduct up to about 1.5 mA, which pulls down the voltage at the lower side of the resistor by 1.5 V, turning off the transistor, which turns off the LED. When it’s dark, the transistor is able to conduct about 15 mA through the LED. So, the circuit uses only about 1/10 as much current while the LED is off. One thing to note about this circuit: We’re using a red LED. That’s because the voltage drop across the transistor allows less than the full 3 V across the LED. The full three volts is really only marginal for driving blue LEDs anyway, so two-point-something really doesn’t cut it. (Might be able to work around that with a cheap FET– haven’t tried yet.)

And now, let’s build it. You can certainly put this together on a breadboard, but there’s something more satisfying about the compact and deployable build that we walk through here. 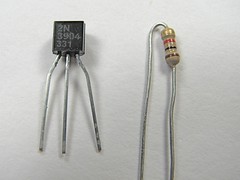 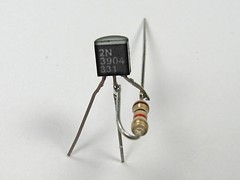 Stay safe when you do this: Use Mr. Hands.

After soldering, clip off the excess resistor lead that is attached to the transistor base (middle pin), as well as the excess length of the collector pin. 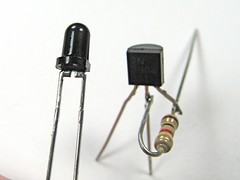 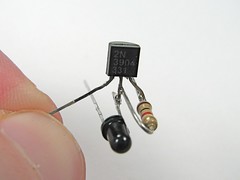 Finally, we need to add the LED. To do so, we need to know which side is the “positive,” or anode side of the device.

Regrettably markings of LEDs are not consistent, so the best way to be sure is to test it with the lithium coin cell– put the LED across the terminals of the cell and, when it lights up, note which side is touching the (+) terminal. (Usually, it’s the one with the longer lead.) Solder the “positive” lead of the LED to the emitter pin of the transistor– it’s the one on the left, which doesn’t have anything soldered to it. Trim away the excess lead of the LED that goes past the solder joint. Solder the other pin of the LED (the “negative” pin, or cathode) to the emitter of the phototransistor, the pin on the non-flatted side, which does not have anything connected to it yet. 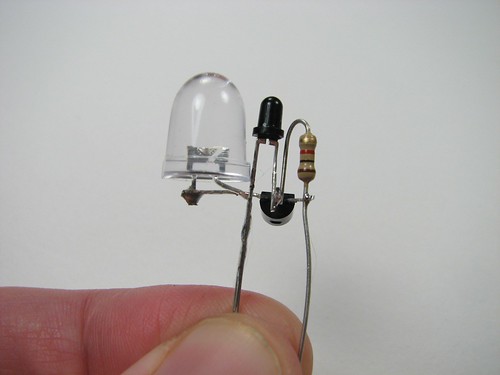 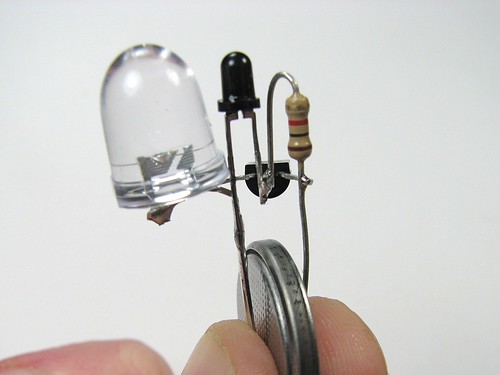 To test the circuit, squeeze the coin cell between these two terminals, positive side goes to the lead touching the resistor. You can’t see the LED on here because these photos were taken with incandescent lighting– it wouldn’t turn on. 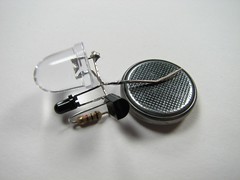 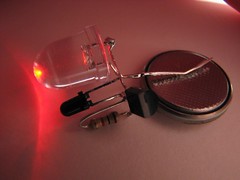 Bending the leads to contact the lithium cell a little more reliably, you can try it out a little more easily. In the photo on the right, I cupped my hand over the circuit– so the LED turned on. 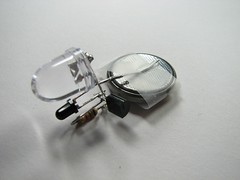 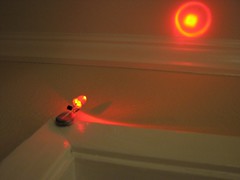 To make this into an actual “throwie,” you still need to add some tape and a magnet, but that’s quite easily done. This one makes a pretty good nightlight attached to the top of a doorframe– when the room lights are off, it shines a bright, bright spot on the ceiling.

Where to go from here? While this little circuit can do something on its own, it would probably also be happy as part of a larger circuit. At a minimum, note that if you work with batteries that have lower internal resistance than the lithium coin cells, you should place an appropriate resistor in series with the battery before trying to operate this circuit– or else you may put too much current through the LED. Certainly, this is one of the easiest and least expensive ways to control an LED with a photosensor. (Unlike, say, this method?) You could also consider crossing it with some more extreme mods, like the
Talkie Throwies that know Morse code, or for more extreme hackers, bagel throwies.

This set of components works well, and is a pretty neat little dark detector.

We have received hundreds of responses to this article both here in the comments (which are now closed due to abuse) and by e-mail, asking (a) how you would modify this circuit to do X, Y, or Z, (b) whether you can use component THX1138 for the phototransistor, because that’s the only one available on the tropical island where you live, or (c) why your circuit doesn’t work, because you only made two substitutions.

We are, for the most part,unable to respond to inquiries like these. Designing circuits is not always trivial, and we don’t want to give flippant (or worse, wrong) answers, when people are trying to solve problems.

To give the quick set of answers to some of the popular questions:

If you would like to see a couple of other examples of dark-detecting circuits, please see here:

A dark detecting circuit for your pumpkin and a forum post showing how to build this circuit with white LEDs.

149 thoughts on “A Simple and Cheap Dark-Detecting LED Circuit”