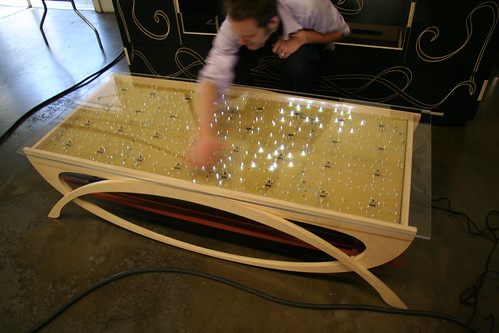 Last year at Maker Faire, we showed off our interactive LED dining table. There, we met the fine folks at Because We Can, who make amazing mostly wooden things with a little help from their robot. We eventually all decided on collaborating to design and build a new series of interactive coffee tables. We’ve just wrapped up the project and are introducing them this weekend at Maker Faire.

Besides what is written about them on this page, you can read more about them on the
Because We Can Blog, and you can also see lots of photos in the product pages for the two different coffee table designs: the wave and the ripple.

The new tables are designed to look really great whether or not you can see the LEDs. The wooden bases are elegant and attractive, and also if you go up to one and touch it, it will respond by pleasantly lighting up in that area. The tables are designed to respond in a subtle and gentle fashion to stimulus provided by human interaction. They are normally dim and constant– the most you’ll see in a dark room is a faint glow of twinkling like the night sky. When you set your glass down on the table, however, the table “sees” the motion that induces a slow ripple starting in that location that spreads out to other areas of the table as it dissipates. The overall effect is a bit like touching a pool of water, in that your local disturbance turns into an overall gentle rippling, and eventually settles down. It is decidedly not a disco floor– there is no blinking, no programmed oscillations, or for that matter, any digital electronics at all– the circuitry is completely analog to improve aesthetics and reduce eyestrain.

If you saw our interactive dining table last year at the Maker Faire, you might have noticed how it responds to motion. That table has a network of strictly passive light sensors that is able to detect changes in ambient lighting. So these sensors would respond to any changes in lighting in the room, and so would have the state changed by the position of shadows landing on the table’s surface. The new tables are also sensitive to shadows (from incandescent sources), but also incorporate an array of infrared LEDs that allow the table to respond the same way even in pitch-black conditions. 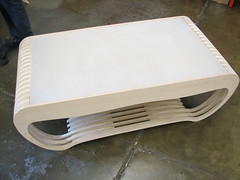 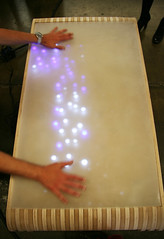 The algorithm implemented by the new tables is also quite different from those on the old design. The old table has 448 multi-colored LEDs that are arranged in banks of 14. At any given time half of the banks of 14 could be either fully or partially on and by interacting with the table you can, in a non-obvious way, affect which banks are on at a given time. The exact behavior was intentionally obfuscated in order to give the table an organic and non-obvious feeling almost as though it were alive and thinking about what it should do in response to you. By contrast, we wanted the new tables to have all of their LEDs essentially off when no one is interacting with the table or its environment is still. When a given node senses a change in the light conditions above it, it triggers its two banks of 10 super bright LEDs to turn on in the pattern of a damped sine-wave where one bank of 10 represents positive values of the sine-wave and the other negative. In non-mathematical terms, that means that touching an area leads to a rippling affect of the LEDs surrounding that point. After a few cycles of the ripple, you can begin to see the ripple spread to neighboring sites and the ripple dissipates across the table surface over the course of a minute or so. 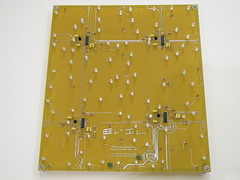 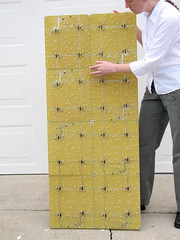 The active surface of the interactive coffee tables is an array of printed circuit board panels that sits beneath the visible surface of the table, whether that is a clear or frosted glass or acrylic top. The circuit board panels are 12 x 14 inches and are the same ones that we we wrote about laying out with open source tools a few weeks ago. Each panel has four network nodes (each with its own infrared photodiode) and supports 80 super bright LEDs. The boards are symmetric in their connections and can be wired up in any configuration where the individual boards line up edge to edge. If needed, they could also be connected by long wires leading to distant but connected boards for a network of interconnected cocktail tables, for example. In the photo here is the array of boards for one of the two coffee tables that we have made. It is a two by four array with total dimensions of 24 by 56 inches. Altogether it is a *very large* circuit board. In order to try out a variety of possible styles that you might build shapes around these circuit boards, we made two very different interactive coffee table prototypes with very different CNC machined bases. To contrast them, one has all white LEDs while the other has a mixture of half blue and half white super bright LEDs. We built one with a clear top and the other with an acrylic top sanded on both sides. This gives an almost magical effect because you cannot see the LEDs or circuit boards whatsoever. In fact, if no one has disturbed the table recently you would never guess that there is anything electronic or interactive about the table.

There is a photo set where you can see many more pictures of the tables. Better yet, you can actually come to the Maker Faire and try them out for yourself. These tables are also now available for purchase online through Because We Can; take a look here for one version and here for the other. We also made a flyer that says most of this in a printable format (460 kB PDF).

This entry was posted in Electronics, EMSL Projects and tagged electronics, interactive LEDs. Bookmark the Permalink.