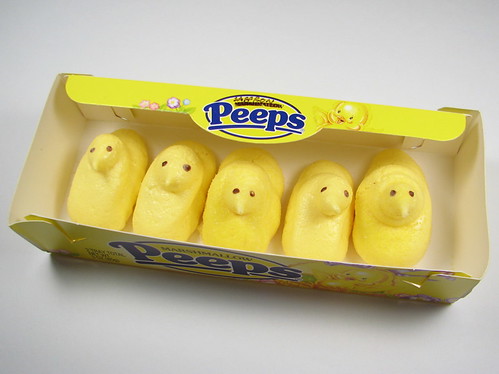 Marshmallow Peeps have an amazing cult following, and it’s no wonder why: they are cute, abstract, colorful, ubiquitous, and sugary. While it sometimes seems that the entire human race is firmly in favor of performing cruel experiments on them, there is a little less consensus on whether or not one should actually eat them. Both sides of the aisle have their merits, of course, and more often than not the debate is merely over whether fresh or stale peeps are tastier. All debating aside, here’s a gourmet option for fans of Peeps that prefer to stuff their gizzards with something other than mass-produced marshmallows: Saffron Meringue Chicks!

Much has been written on peeps. An excellent place to start is this article from 2000 on peeps etiquette, which states that “there are, believe it or not, 20 Web sites devoted to Peeps, and many feature crafty projects.” While we’re not quite sure how to adjust that figure of 20 sites for internet inflation, a recent Google search for “marshmallow peeps” turns up more than 160,000 hits. Obviously we haven’t been to all of them, but here are some highlights from the pages that we have seen:

Most pertinent to our project (via not martha) is this article about DIY peeping, including the official but 2-D Peep kit, how to make your own in 3D, and marshmallow recipes from Brownie Points.

While fresh marshmallows are fantastic, meringue gives you the option of omitting the gelatin (a plus for semi-vegetarians such as ourselves) and not worrying about getting to the “soft-ball stage” in candy making. Meringues are pretty straightforward: whip stuff together and then bake at a low temperature for a long time. Ours have the added bonus of a natural coloring agent (saffron) which produces the perfect peep yellow and imparts a very distinctive flavor. 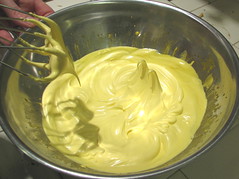 Start out with a basic meringue recipe like this one (we used the meringue cookie recipe from Baking Illustrated) and mix 1/4 to 1/2 teaspoon crumbled saffron strands into the egg whites prior to whipping them. 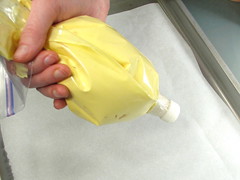 Spoon the meringue cream into a pastry bag or gallon ziplock bag fitted with an icing tip. 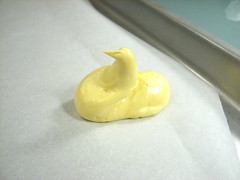 Put some parchment paper on a cookie sheet so that your meringues won’t stick.

Pipe the chicks starting with the body, back up for the neck, then release pressure and pull away for the beak. 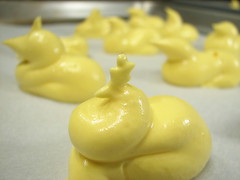 Mutant peeps can be sculpted with a toothpick. (This one looks more like an (obese) adult chicken than a chick.) 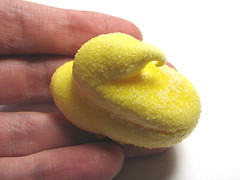 Optionally, sprinkle with a thin even layer of granulated sugar before baking.

The sugar gives your baked meringue the illusion of being an encrusted marshmallow– the yellow meringue encrusted with clear sugar looks just like the white marshmallow encrusted with yellow sugar. Don’t overdo it on the sugar sprinkles– it can weight down the meringue during baking, and excessive sweetness does not compliment the saffron.

Bake according to your recipe, usually one to two hours in a barely warm oven. Once they are out and cool, it’s time to add the eyes. 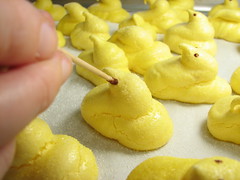 Melt a few chocolate chips and dab eyes on. The tool shown here is a Japanese-style toothpick. The flat end is just the right size for the job. If your sugar layer is particularly heavy, you’ll need a larger dab of chocolate. For smoother peeps, you need hardly any at all. 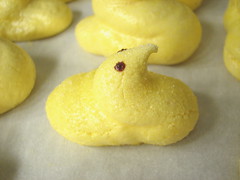 Next thing you know, armies of little yellow pseudo-peeps will be coming to rule the world. Save room for dessert. 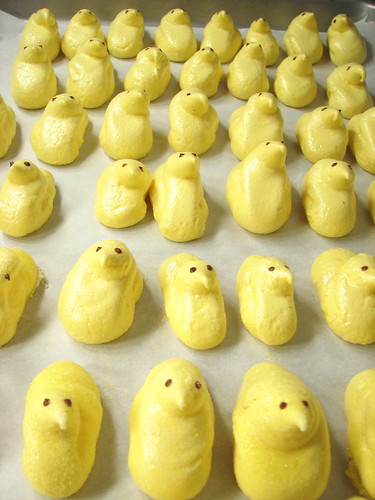 This entry was posted in Play with your food and tagged diy, food, peeps. Bookmark the Permalink.