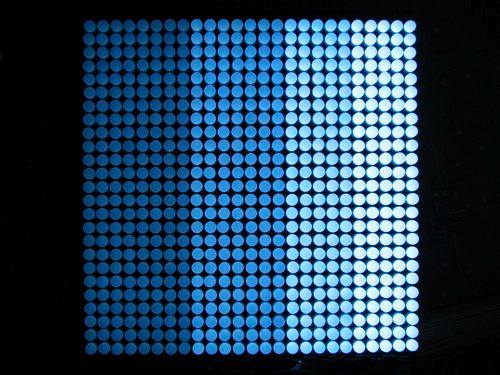 Note: This article is out of date but archived here for future reference.
You can find the current version here.

Today we present a basic-function Arduino library for Peggy 2.0.

This brings Peggy 2.0 up to the level of having useful compatibility with the Arduino software environment: you can use high-level commands to control what shows up on the Peggy display. For example, the type of high-level command might be something of the form “Peggy_SetPoint(x, y)” which would turn on the LED located at position (x,y) in the grid.

As we have discussed earlier, Peggy 2.0 is Arduino compatible in the sense that supports programming through a USB-TTL cable, using the popular Arduino software environment.

Note 1: You can also program Peggy 2.0 in the Arduino environment without the USB-TTL cable if you have an AVR ISP compatible programmer like the USBtinyISP. See this note on how to make that work.

Note 2: Peggy also still supports programming with an AVR ISP interface using the GNU AVR toolchain; please see the original article about programming Peggy 2.0 if you are using that approach.

First things first: This is not (by any stretch) intended as a full Arduino tutorial; there are plenty of very good examples out there already, and other lists of resources to point you in the right direction. Still, if you have done some programming, this may well be enough of a guide to get you up and running.