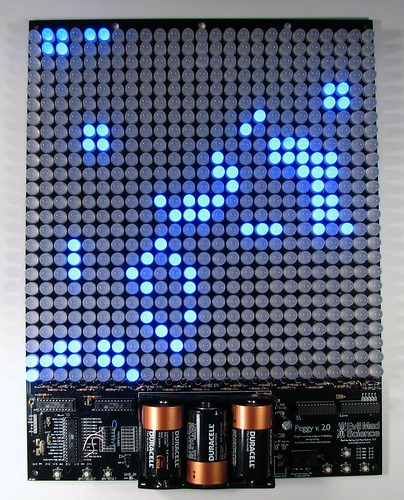 Today we’re releasing an update to our “Peggy” open-source LED Pegboard project. Peggy version 2 has been redesigned from the ground up. And it looks… almost exactly the same. The changes under the hood are substantial, though, and we think that it’s a big improvement in many ways.

First and foremost, Peggy 2.0 still does the same darn thing: it provides efficient power to a 25 x 25 array of LED locations. Peggy is designed to take some of the sting, complexity, and mess out of playing with LEDs. It’s a versatile and powerful light-emitting pegboard that lets you efficiently drive hundreds of LEDs in whatever configuration you like, without so much as calculating a single load resistor. You can install anywhere from one to 625 LEDs, and Peggy will light them up for you. 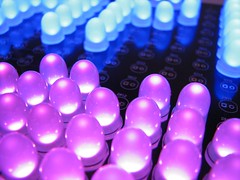 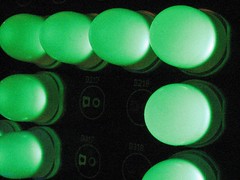 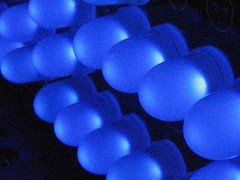 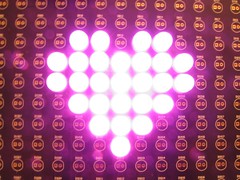 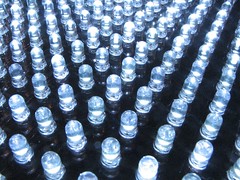 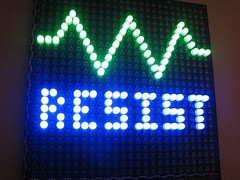 Peggy can optionally be reprogrammed to do much more, of course. The biggest change is that the Peggy 2.0 hardware now supports simple animation capability with individually addressable LED locations. Besides the microcontroller, there are now four support chips that help to drive the rows and columns of the display. Now, we’re not talking live video feeds or long movies here (speed and memory considerations will spoil that party), but you might be surprised how much you can do with a little AVR microcontroller. 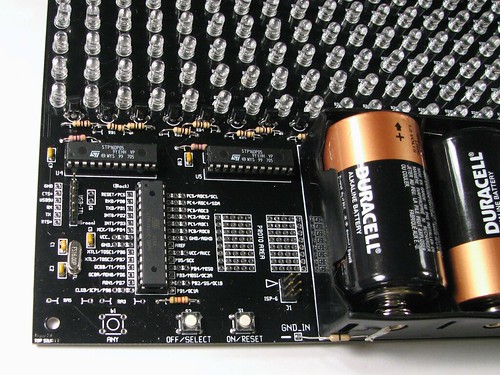 Other improvements and new features:

Here are some project ideas that might be fun to try with Peggy 2.0:

Since the full display is addressable, there’s really a wide-open set of potential applications. As a first demonstration I wrote a version of Conway’s game of Life. It’s not written from scratch; it’s adapted from this project by David Gustafik, and the code is available under the GPL. We’re embedding a little YouTube video here; if you can’t see it, you can click through to YouTube.

How do you make it?

This project is fully documented, open source, hacker friendly, and you can approach it from any direction you want. Start with the schematics and code, or start with a circuit board and a soldering iron. It’s all yours:

This is an easy way to drive a lot of LEDs– up to 625– in a big matrix. You can make an LED sign for your window, a geeky valentine for your sweetie, one bad-ass birthday card, or freak the holy bejesus out of Boston. Your call. It’s a versatile, high-brightness display.

The display can run off an AC adapter or batteries (3 ‘D’ cells), and is designed to run as LEDs as you care to solder into the holes, all with excellent brightness. The board can accommodate LEDs in several common sizes: 3mm, 5 mm (standard T-1 3/4 size), and 10 mm.

2. Do I have to put the LEDs on the grid, or can I position them exactly where I want to?

You do not have to place every LED on a regular grid. See the instructions for some tips on how to position the LEDs more arbitrarily.

3. Do the LEDs get soldered in the holes?

If you do want to add sockets, go right ahead. (Peggy is designed to be hacked.) However, keep in mind that you’ll probably end up doing more soldering in total, and those sockets cost more than you might think.

4. Does the Arduino Bootloader come preinstalled on chips in the kits? Does it work? Is this the world’s biggest Arduino?

Use a USB-TTL cable and tell the Arduino software that you have a Diecimila. It works well. While the board is big, it is technically not “an Arduino”, as per
guidelines issued by the Arduino team. (Arduino is the proper name of a hardware + software platform, so the term “an Arduino” is a bit misleading in any case.) Peggy 2.0 is merely open-source hardware that happens to be compatible with the Arduino software development environment. (And no, we won’t rename it Pegguino.)

5. What is the default program installed on the chips in the kits?

First, we load the Arduino bootloader onto the chips, and then we load up the default program, which lights up every LED location on the board. That way the board will work correctly if you just start using it, but it will also accept reprogramming through the Arduino environment, or (as always) accept programming with an AVR-ISP programmer.

6. Is “Peggy” named after someone?

Nope. It just comes from the term “pegboard.”