It’s a common figure of speech to say that x is worth its weight in y, where y is usually (but not always) gold. But most of us don’t buy and weigh gold very often, so how do you connect that to real life? Does “worth its weight” in pennies or $100 bills make any more sense?

We have collected here a bunch of examples for different things that represent a wide range of monetary value per unit weight, in what might make a useful
calibration chart for your future idiomatic usage.

Let’s start this off with a down-to-earth question. Which has a higher monetary density: dimes or quarters? In other words, if you had to carry around $1000 worth of either dimes or quarters, which should you ask for? 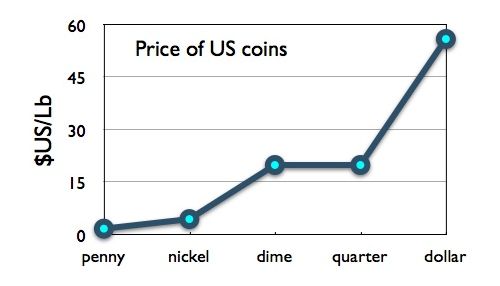 And… surprisingly enough, dimes and quarters have the same density, about $20 per pound, so you can pick either. (But as you can see, nickels are mighty inefficient. Avoid carrying them in your pockets whenever possible. ) 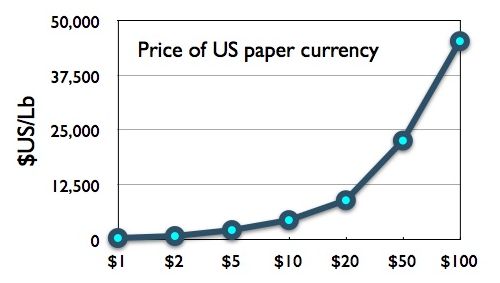 On a related topic, paper bills weigh about 1 gram each. The monetary density of paper currency makes much more sense– just look at that beautiful curve. Clearly, bigger bills are better. 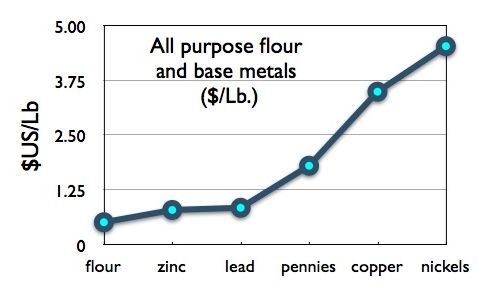 Alongside US coins we have such staples as all-purpose flour and base metals. Interesting that copper is worth so much more than pennies are– but pennies these days are only 2.5% copper, the rest is cheap zinc. (In fact, pennies haven’t been
made of plain copper since 1837.)

[Aside: The commodity prices that we cite here are all rough estimates, believed to be more-or-less correct as of August 2008. See the table at the end for references.] 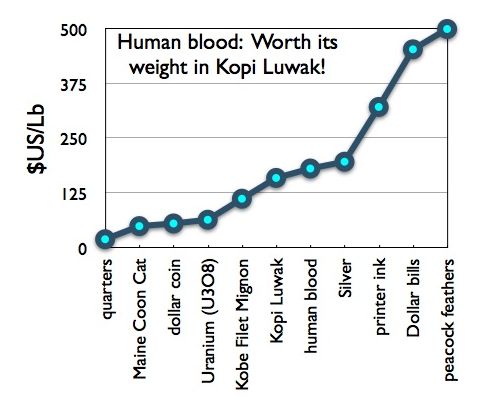 Kopi Luwak coffee costs approximately the same amount per pound as human blood. (Knowing where it comes from, I think I’d rather drink the blood. It’s been pointed out before that printer ink is also up there, but I’d rather not drink that either.) 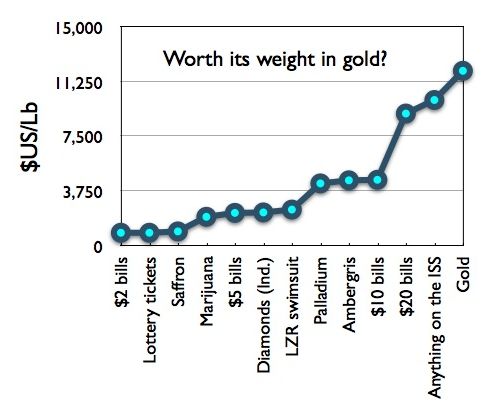 People have been saying that the new industrial grade swimsuits like the LZR Racer are worth their weight in gold. As you can see, this is clearly inaccurate. But such a suit is worth its weight in marijuana or industrial diamonds.

At the high end of this graph is gold (the only thing worth exactly its own weight in gold!), right next to the cost of launching a pound of stuff to low earth orbit on the ISS. Putting that into perspective here: You might as well build your whole spaceship out of $20 bills– it still would cost less than putting it up there. It could almost be made of solid gold for that price. 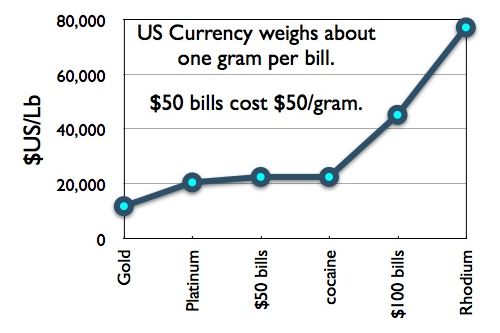 Of course, gold isn’t the only precious metal, or even the most expensive. That “honor” belongs to rhodium, whose price far exceeds that of its weight in $100 bills. There’s an interesting coincidence in this price range: Cocaine is about $50/gram, while a fifty dollar bill weighs about a gram. Even exchange? Platinum is also in the same price range, so you could say that $50 bills are worth their weight in platinum. 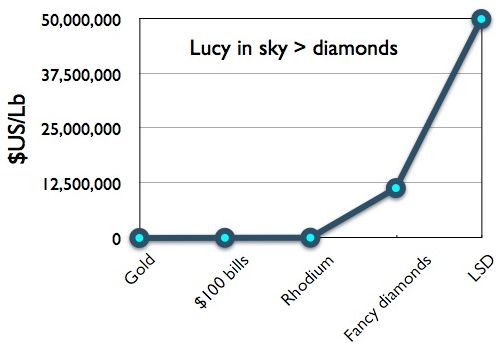 If we look at good-quality 1 carat diamonds, we find that they are quite expensive compared to the industrial diamonds we saw earlier. Now, the diamond monopoly hasn’t kept prices quite as high as LSD, however they are doing a very impressive job of trying. LSD doses measure in the micrograms, which makes the per-pound “street value” of the stuff astronomically high.

In the table that follows, we list our data with references, organized from cheapest to most expensive. A few of the items in the table didn’t make it into our graphs, including the last (and most expensive) item. Antimatter — presently made one subatomic particle at a time– would be unfathomably expensive in the bulk, some $26 Quadrillion per pound.

This entry was posted in Everything Else and tagged money. Bookmark the Permalink.

65 thoughts on “The monetary density of things”