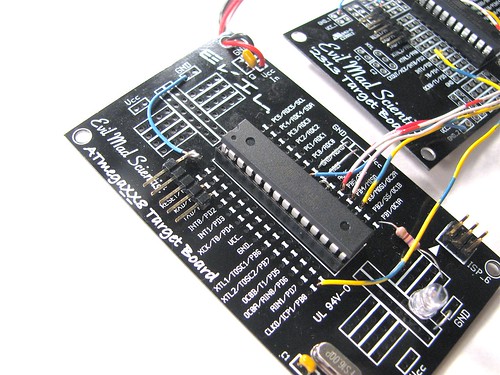 One of the distinguishing characteristics of beginner-friendly microcontroller platforms– Arduino, PICAXE, and a few dozen others– is that they neatly wrap up and hide the nuts-and-bolts details of interfacing with the hardware.

Like everything else, it’s a blessing and a curse. The benefits are clear: A new user who has just acquired an Arduino can plug it in, blink an LED, and have a working demonstration of two-way serial communication in just a few minutes.

The drawbacks are a little harder to see. When you just use one line of initialization that calls a “library,” it’s easy to overlook exactly what’s involved: how many lines of code have invisibly been added to your program? What memory structures have been allocated? What interrupts are now going to disrupt program flow and timing? There’s also a portability issue. We often hear from people who got started with Arduino but now want to explore other AVR microcontroller systems, and don’t know how or where to start the migration process.

In what follows we discuss a minimal setup for serial communication with AVR microcontrollers, and give two example implementations, on an ATmega168 and on an ATtiny2313. While this fundamental “AVR 101” stuff, we’re approaching the problem (this time) from the migration standpoint. Suppose that you had an Arduino based project, where you relied on serial communication– using the library functions–between that hardware and your computer. From there, how would you migrate to a stand-alone AVR microcontroller with similar functionality, or even to a different microcontroller?

The answers, of course, are (1) that you have to hook things up correctly and (2) it’s nice to have some simple and lightweight set of routines as a good starting point.

To begin with, we need a good working cross-platform example of two-way communication between the host computer and the Arduino. We chose as the starting point the Processing sketch (example program) “Serial Call-Response” by Tom Igoe. This is actually a two-part program, where one half runs on your computer and the other half on the microcontroller. What we’re doing is to create a functional clone of the microcontroller program, that can still talk to the host-side program (which is still running in Processing on your computer).

Let’s look at the chips:

We’ve drawn the ATmega168 and ATtiny2313 here, with the pinouts for power supply and the serial port transmitter (TX) and receiver (RX) pins highlighted. These are some but (probably) not all of the pins that you’ll need. For example, if you want to program the AVR in circuit, it’s often best to do that with an ISP programmer, and our article about
minimal target boards explains how to hook one up.

Back to the serial ports. If you look in the datasheets for these chips, you’ll find each serial port labeled as a “USART,” for Universal Synchronous and Asynchronous serial Receiver and Transmitter.

Now, the microcontroller USART pins are designed to operate at logic levels– between 0 and 3-5 V. This means that they can’t directly hook up to RS-232 without a level adaptor. They also aren’t set up for directly hooking to USB, so an adapter of some sort is usually needed unless you’re talking directly to another microcontroller.

Our adapter of choice is the FTDI USB-TTL cable: 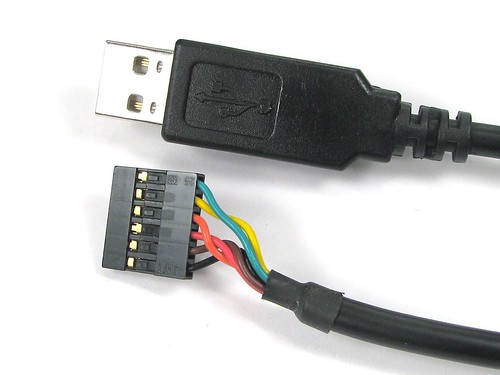 This cable has an integrated circuit built in that translates between a microcontroller’s serial port (USART) and USB. (That’s in fact the same chip that the Arduino has on board for the same reason.)

Here’s how to hook it up to one of the microcontrollers: 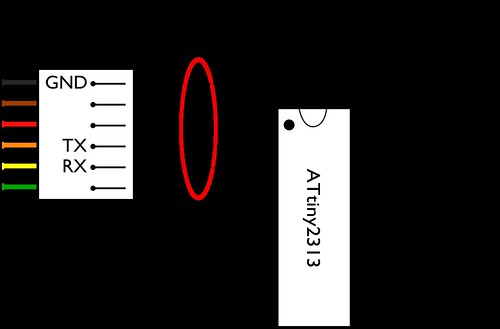 Three pins on the connector are relevant for us: TX, RX, and ground. (Ground so that your computer and microcontroller board have a common voltage reference.) The TX (transmit) pin of your microcontroller goes to the RX (receive) pin of the cable/computer, and vice versa. 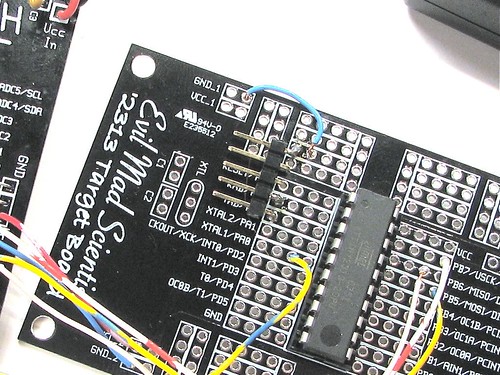 In practice you can do this with a 5 pin header with two teeth cut out, where the fifth pin is connected to ground. This can be done on a target board like we’ve done here or on a breadboard– it’s a quick way to hook things up without laying out a special board just for the serial port. The serial port pins on the ‘2313 (above) and ‘168 (below) are in the same place, so you can hook this up identically on either board.

Both source code examples contain a C source file and a makefile; they can be compiled and loaded onto the microcontrollers from AVR-GCC or compatible systems; if you’ve never put code onto an AVR before, you might find our list of Resources for getting started with AVRs helpful.

The source code is meant to be a minimal implementation of bidirectional communication that can talk to the “Serial Call-Response” sketch. The two implementations, for the two different chips, are mostly identical.

We begin by setting several pins to be outputs, using the “data direction registers” defined in the datasheet. The only one of these that’s actually important is pin D1, the TX pin, on each board. We also have a place to put an indicator LED on each board, and a few other outputs for optional debugging.

The baud rate is implemented using a non-obvious but relatively compact scheme taken from the datasheet. It takes as inputs the CPU rate and the desired baud rate. The CPU clock frequency is 16 MHz from an external crystal oscillator on the ‘168 example and 8 MHz from the internal RC oscillator on the ‘2313 example. (If desired those can be changed with the fuse settings. You know about the AVR fuse calculator, right?)

These functions work directly with the hardware; buffering and interrupts are not implemented. This makes the program lean and mean, with a tiny footprint. Working without interrupts and buffers means that you need to poll (i.e., check for new incoming data) at least as often as new data could appear– e.g., about 1 kHz or faster for 9600 baud. It also means that incoming serial data will never interrupt time-critical functions that are executing. And the memory footprint is much, much lower. This takes mere bytes of RAM to implement– making it quite practical on the ATtiny2313 which only has 128 bytes of RAM. (For comparison: the Arduino serial library usually allocates 128 bytes of RAM as a RX buffer alone.)

So, there are tradeoffs– but these lightweight functions work well enough, and should provide another helpful stepping stone to AVR, from either above or below.