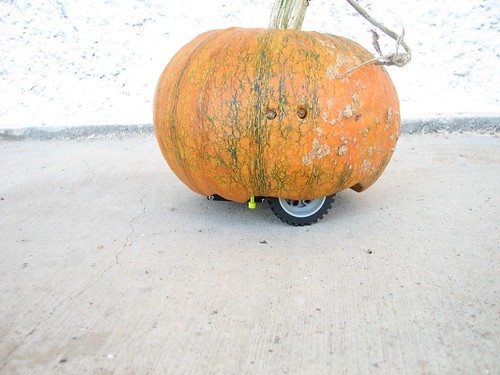 The Rovin’ Pumpkin’ is a simple robotic pumpkin, and a close cousin of the Snap-O-Lantern. Silently, it sits on your porch– camouflaged amongst the humble squashes.

After a minute, its green eyes start to glow, and it creeps… moving about one foot to the left… and stops. The eyes go dark again. It fades into the darkness. And it waits.

After several minutes and several steps, it reverses direction, and begins to creep the other way. Hopefully before it falls off of your porch.

Practical? Heck no– it’s a halloween robot, and a perishable one at that. Its sense of direction is terrible, and who knows where it would end up if you let it loose in a park. Adult supervision and regular course corrections are suggested.

On the bright side, it looks very cool, especially at night, and it’s a relatively easy project (especially compared to some of our other robots). Also, and for better or worse, it can indeed scare the beeping bleep out of unsuspecting individuals who visit your darkened front porch. 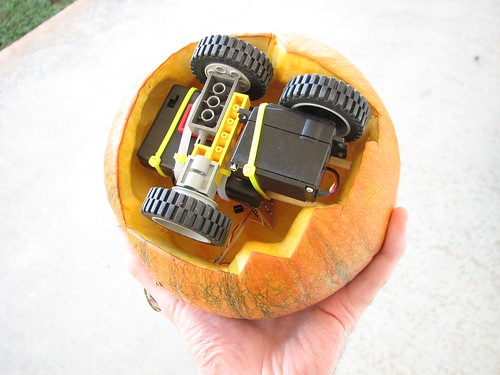 The Rovin’ Pumpkin’ started out as a particularly attractive green-veined pie pumpkin. We carefully carved it out from the bottom to leave a shell that could sit on top of our robot platform. 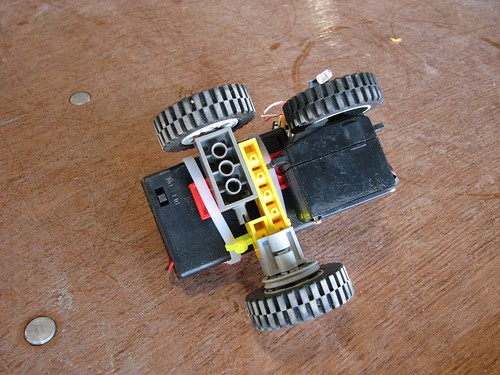 The platform itself was built from three Lego wheels and one standard size servo motor, modified for continuous rotation.
Some cable ties and superglue were used to hold it together with a 3xAA battery box. 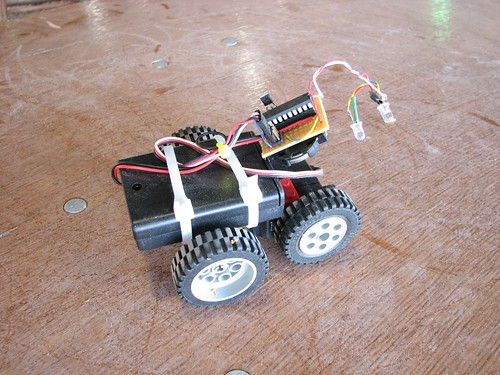 Deep inside and on top of the battery box is the tiny circuit board with an ATtiny2313 microcontroller and leads going to two LEDs for the eyes. The circuit is the same one used in our Snap-O-Lantern project, with the exceptions that (1) this one has a standard size servo motor and (2) a transistor was (unnecessarily) used to drive the two LEDs. If we were to start this over, we’d probably try to save some wiring time by using our ‘2313 target boards.

A very short video follows, embedded below, or you can click through to see it on flickr. 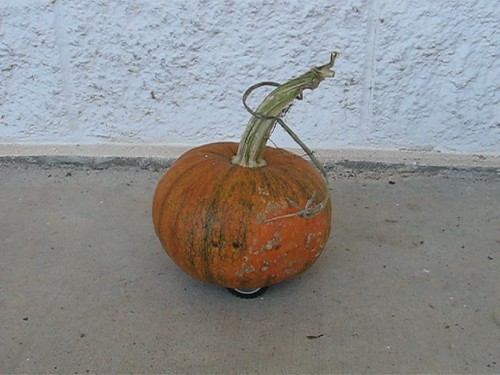 Not that you could tell from this video taken in the daylight, but the LED eyes are painfully bright green. ;)

The source code for this project is available for download
here (4 kB .zip file). It’s designed for use with AVR-GCC and an AVR ISP programmer. If you’re new to AVR programming, you might want to start by looking at our list of resources for getting started with AVR microcontrollers.