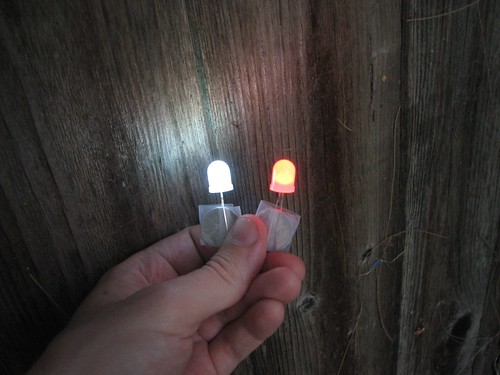 We’re big fans of LED throwies and derivative projects where you light an LED simply by connecting it across the terminal of a small lithium coin cell.

You’ll find this trick used in a lot of our projects that call for simply lighting up an LED in a tiny space, like the temporary LED lanterns, LED Ghosties, Robogames awards,
LED origami circuitry, light-up Lego minifigures, and edge-lit holiday cards. You’ll also find them in those little keychain flashlights– open one up and there’s just a battery and an LED.

So the throwie (and I use the term loosely, referring to devices with or without magnets) is a darned useful thing. But the first time that I was introduced to the concept, I asked what a lot of other electronics-oriented people do: “where’s the resistor?”

Turns out that it’s a fair question. LEDs aren’t normally driven directly from a battery. And yet (1) people were making throwies with every imaginable color of LED and (2) they apparently weren’t exploding. So what’s the deal?

Turns out that the deal depends on what kind of LED you’ve got, and a few more things after that. The “standard” battery for this sort of thing is a CR2032 3V lithium coin cell. Almost any kind of an LED can be found in one of those little keychain flashlights, but throwies usually are made with 10 mm diffused-lens LEDs in assorted colors. Most garden-variety LEDs are rated to operate safely at 20 mA or perhaps a little bit higher. Blue, white, and most modern green LEDs have a typical forward voltage of about 3.5 V when run at 20 mA, and typical red or yellow LEDs have a forward voltage of about 1.7 V when run at 20 mA.

This is actually straightforward for the 3.5 V LEDs. It means that when you put that 3 V coin cell across a blue or white LED, the current will stay safely below 20 mA, because the coin cell does not provide enough voltage to exceed that.

And while this does provide an upper bound, it doesn’t actually say much about what goes on once you hook up the LED. The current through the LED depends exponentially on the voltage across it, and the voltage across the battery depends on the current due to its internal resistance, and a number of other potential factors come into play. If you actually measure it, you might find that the current across the LED looks like this: 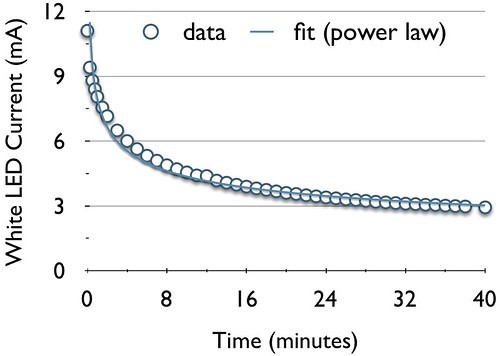 This data was taken by hooking a new CR2032 cell across a white LED and measuring the current with a digital multimeter. The current was as high as 11.1 mA, the moment just after it was hooked up. After one hour the current had fallen to 2.75 mA, and had brightness typical for a throwie. Empirically, the data has roughly the shape of a power-law distribution. 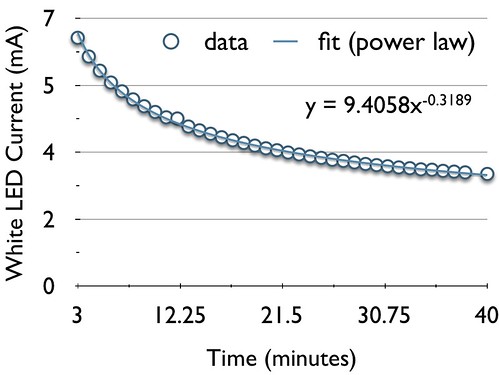 If we remove the first couple minutes of data, the remaining part turns out to have a verygood fit to a power function– that will come in handy later. The neat curve fit after the first couple of minutes suggests that perhaps the variation in the first minutes is due to temperature changes at turn-on. So this all looks reasonably well-behaved– obviously safe without a resistor.

Okay, but what happens when we make a throwie starting with a red LED? For red, yellow, and orange LEDs, the typical forward voltage is well below 3 V, usually about 1.7 V, so we would expect that *more* than 20 mA will be produced, at least for a little while. So, let’s try it out. We hooked up a red LED to a new CR2032, and again measured the current. Here’s what we saw: 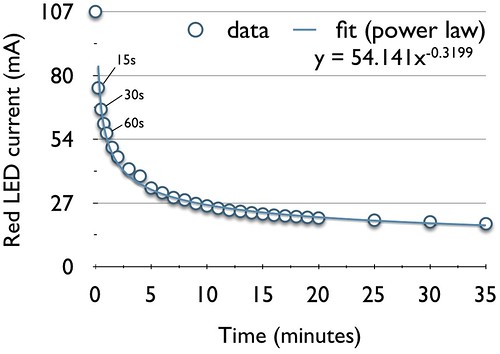 Yes, this is reproducible. (That is to say, we used up another battery just because we didn’t believe it either.) But holy cow anyway.

“And they said this was safe?” There are a couple of legitimate concerns here. Lithium coin cells aren’t designed to source nearly that much power– and aren’t lithium batteries a fire hazard? And why does my LED– rated for 25 mA continuous current survive this? I’ve certainly seen enough LEDs destroyed by overcurrent, and this one was over 25 mA for ten minutes solid. But, and perhaps against my better judgement,
I do believe that this actually *is* safe in practice. With all of the throwies and similar things out there — don’t forget the keychain flashlights — they just don’t seem to be exploding or catching on fire. (Breaking, falling apart, running out of photons, yes– but those modes of failure are usually not as dangerous.)

So, if we are draining this much current from the battery– up as high as 107 mA– is the battery totally dead after just the first half hour? It turns out that we have a fairly good curve fit to the data there, so we can use *ahem* magicto estimate that about 13 mAh worth of energy are consumed in the first half hour. The nominal capacity of our CR2032 is 225 mA*, so that looks like about 6% of our total capacity.

[*225 mA is the nominal capacity. As we’ll discuss a little later, the actual capacity may be much lower when sourcing that much current.]

To get a better grasp on the current that we’re using, let’s look at this over 24 hours: 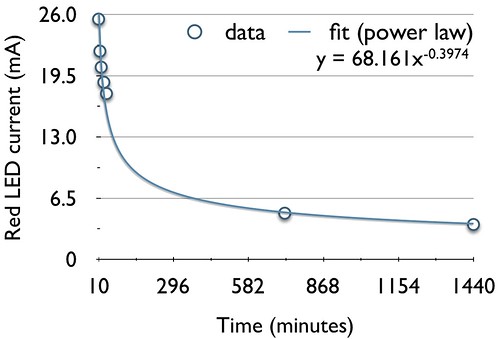 This data shows a couple of interesting things. First is that the power-law model seems to hold fairly well. Second, the power function that pops out is not very different from that of the data from only the first half hour– integrating both out to 24 hours gives two answers– 150 mAh and 186 mAh –that differ by only 25%. The estimate based on the long data record (150 mAh) is the more accurate one, but this does suggest that we should be able to use the data from the first half hour alone to get a fairly good “factor of two” estimate of the performance over 24 hours.

Now going back to our white LED and our curve fit from the first half hour, we can estimate that the white LED uses about 33 mAh in the first 24 hours, as compared to about 150 mAh in the red LED. Remembering that the nominal capacity of our CR2032 is 225 mA, this is a really big difference.

It gets worse. If you look at the datasheet for a CR2032, you’ll find that they aren’t actually designed to put out high current. The rated 225 mAh lifetime is what you get when the battery is discharged at its “continuous standard load”: 0.2 mA. At room temperature and 2 mA discharge current, the actual capacity drops to about 175 mAh. Under abusive conditions– like being hooked up to the red LED directly– that’s way outside of the chart on the datasheet, but the capacity may be much lower yet. In practice red, orange, and yellow LED throwies can last as little as a day, and this all makes it pretty clear why.

The official line on throwie lifetime is that throwies last “1-2 weeks” depending on LED color and weather conditions. We’ve already talked about LED color, but the temperature thing comes out in the datasheet too– the voltage developed at the terminals and the total energy capacity of the battery drop significantly when you move from room temperature to freezing weather. Remember that the temporary LED lanterns are for warm summer parties: Throwies are a dish best served hot!”

Now in a situation like this where the LED is drawing too much current from the battery, there is a tried and true solution: resistors.

So…. Do you need a resistor? No, not really. As we said, it seems to be reasonably safe without one. Should you use a resistor? Yeah you should, if you want a red, yellow, or orange LED to last more than a day or so. So you can solder a resistor in place, but that somewhat defeats the purpose of easy to assemble throwies.

So to make it not a total pain-in-the rear to add resistors, here’s a way to do it without soldering: just twist it. 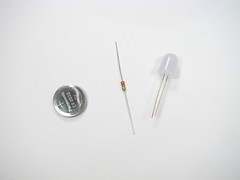 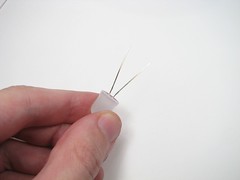 Standard throwie parts (battery and LED) plus a resistor. Pick a few hundred ohms. Spread the leads of the LED apart slightly. 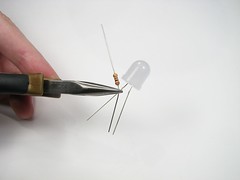 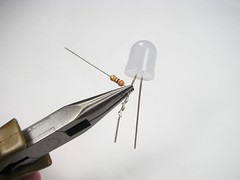 Use a pair of pliers to hold the resistor next to either one of the LED leads as shown. That’s so that you don’t strain the LED or resistor when you twist the leads. 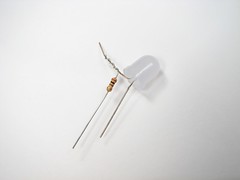 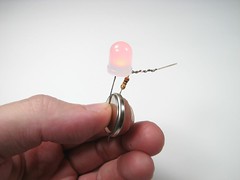 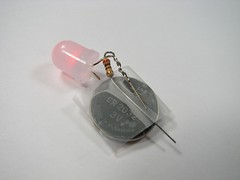 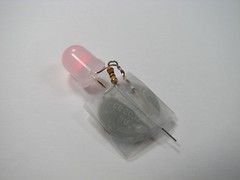 Wrap tape around the two leads that go to the battery like you would normally, and then fold over the extra twisted lead pair and tape it down too. 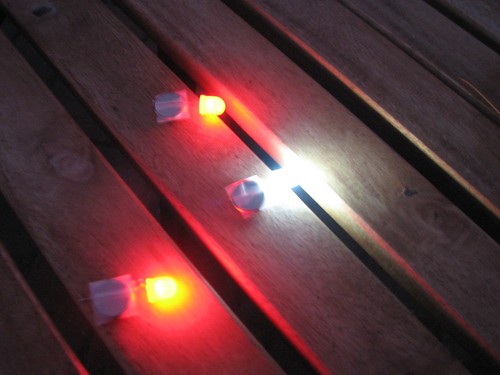 One of the two red throwies here has the resistor; you wouldn’t notice unless you were looking for it.

For the first test of this we used a 200 ohm resistor with a red LED: 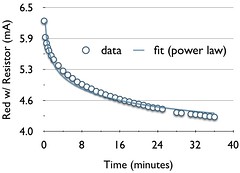 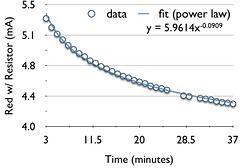 The current never exceeded 6.5 mA, producing much less stress on the battery, and the estimated 24 hour power usage is 81 mAh. A significant savings– it may last more than twice as long as a regular red throwie. None the less, from here it would be better to try a larger resistor to see if we can bring the current a bit lower yet– maybe heading towards that 3 mA value that seems to work so well for white LEDs.

Anyway, these are just some of our thoughts on throwies and things. We’d love to hear about your experiences and comments on these issus.