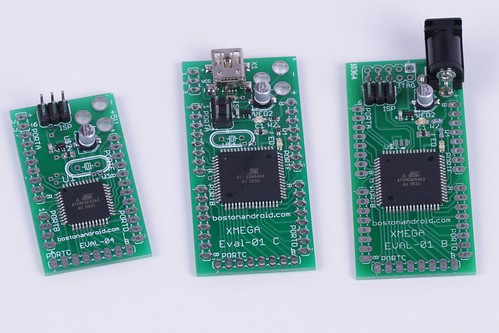 We’ve been big fans of AVR microcontrollers for a few years now. If you look around our site a bit, you might find quite a few AVR projects. And our little friends the ATtiny2313 and the ATmega328P have become our go-to chips for many different purposes.

The new chips are the “XMega” family of AVR microcontrollers. They are, simply and fundamentally, feature-loaded, hot-rodded, more professionally-oriented AVR microcontrollers with a number of common traits. But there are some important differences between these and the older “tinyAVR” and “megaAVR” chips that are worth pointing out, and that we’ll get to.


Admittedly, to call these things “new” is a brush with exaggeration in the age of the internet. The Xmega family was announced more than two years ago, in the spring of 2008. Let’s say that up to now, they’ve been a little too new. A lot of things have come together recently that conspire to make it a ripe season for xmega experimentation:


There’s really a lot more that could be said about the improvements to the peripherals. One thing that really caught my eye was the amount of care put into improving the humble GPIO (general-purpose input/output) functionality.

On an ATmega device, setting a pin B3 for output, taking it high and toggling it might look like this:

(There are certain common functionally equivalent shorthands that I haven’t used here. The first line above might be more commonly written as DDRB &= _BV(3); for example. But it compiles to mean the same thing as I’ve written above.)


The xmega has a somewhat different structure for addressing its peripherals– derived from its design for portability. The direct equivalent on an xmega device would be:

And that is a lot faster.

There are also advanced configurations for pull-ups, pull-downs, interrupts, triggers, level detection, and so on, but that’s what the datasheets are for.


One last word, if nothing else has caught your attention yet: The prices on xmega devices are worth noticing. Just as a quick example, A 100-pin ATmega1280, with 128 k of flash currently costs more than 1.5 times as much as a ATxmega128A1, also with 128 k of flash in a 100-pin package, in single-unit quantity.


So what sucks about these things?

It can’t be all roses, and it isn’t. There are definite drawbacks that you need be be aware of before you move ahead.

First, there’s the obvious backwards compatibility. None of the xmegas are pin compatible or code compatible with older devices. If you normally rely on other people’s code examples, right down to configuring timers and serial ports, you may want to wait for more widespread adoption so that there are more code examples out there to follow.

Next, these are definitely more “professionally oriented” chips. That’s clear from a number of features, particularly that the design lends itself to easily resizing up or down once the code is written. “Professionally oriented” has a couple other very real consequences. These chips are nowhere near as hobbyist friendly as the megaAVR chips, most of which are available in DIP packages– the xmega chips are available strictly in fairly-large pin count surface-mount packages. Along with this, the chips also run strictly at 1.6-3.6 V– they cannot be operated at 5 V like megaAVR. Both of these are a clear signal that xmega is for new designs, and isn’t intended for use with legacy hardware.

Finally, there’s the matter of programming interface. Xmega chips are not compatible with the ISP programming mode supported by most tinyAVR and megaAVR chips. Instead, the xmega chips support (1) JTAG and (2) a newer interface called PDI. If you have an older AVRisp MkII programmer, it can have its firmware upgraded so that it can speak PDI. So far as I know, the USBtinyISP isn’t (yet) able to speak PDI. 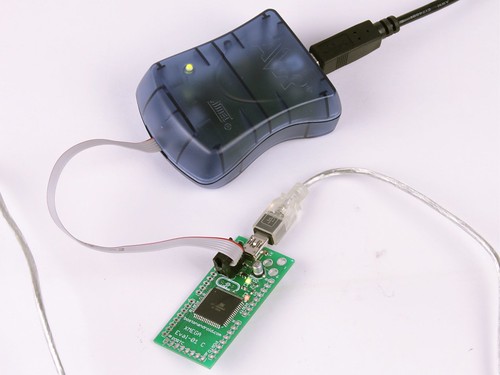 Yep, it’s pretty neat, all right. It’s nice to see AVR growing up a bit, to compete with all the low-end 32-bit chips, and still making things much easier for us simple folk that just want to use some nice chips.

This entry was posted in EMSL Projects, Microcontrollers and tagged AVR, xmega. Bookmark the Permalink.

14 thoughts on “Say hello to xmega”