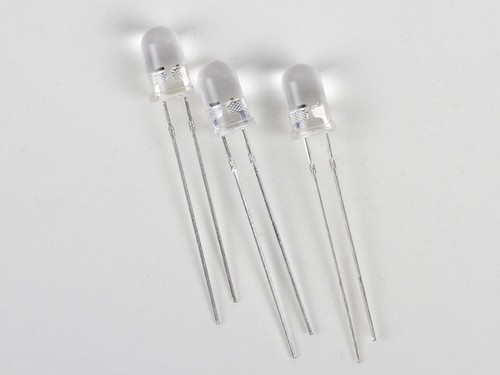 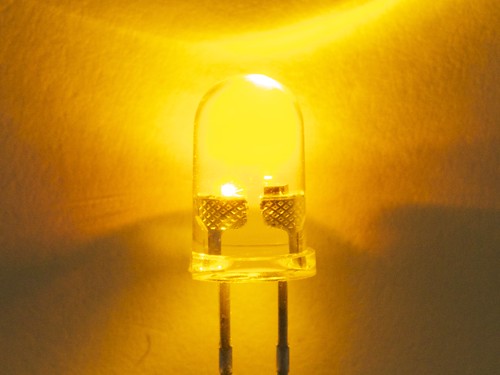 At first glance, these might appear to be normal 5 mm (“T-1 3/4”) clear lens ultrabright yellow LEDs. However, they’re actually “candle flicker” LEDs— self-flickering LEDs with a built-in flicker circuit that emulates the seemingly-random behavior of a candle flame. In the close-up photo above, you can actually make out the glowing LED die on the left side, and a corresponding-but-not-glowing block on the right: the flicker circuit itself. In what follows, we’ll take a much closer look, and even use that little flicker chip to drive larger circuitry. 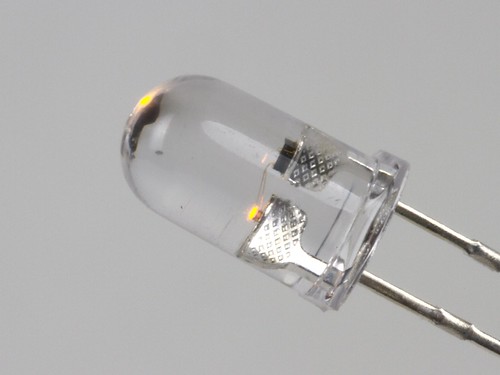 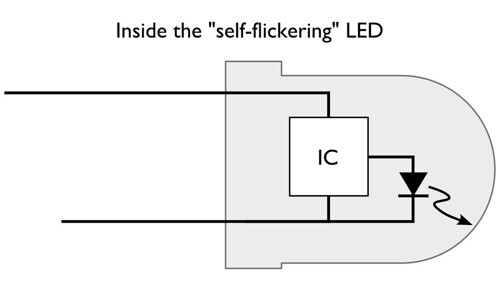 The “flicker” integrated circuit connects to both the anode and cathode legs of the LED to provide its power supply. Its output goes to the anode of the LED die itself, and the other side of that LED die is connected to the cathode leg of the LED. The flicker IC contains both the logic for the flickering and some kind of switch that is able to turn the LED element on and off. The presence of the flicker chip has remarkably little effect on the electrical characteristics of the LED besides the flickering. The forward voltage and current are similar to a yellow LED without the chip, and the LED still works down to microamps of current– still flickering, just dimmer. This suggests that the chip may contain some sort of charge-pump power supply that allows it to work at a wide range of input voltages, and also that its output switch is very efficient. 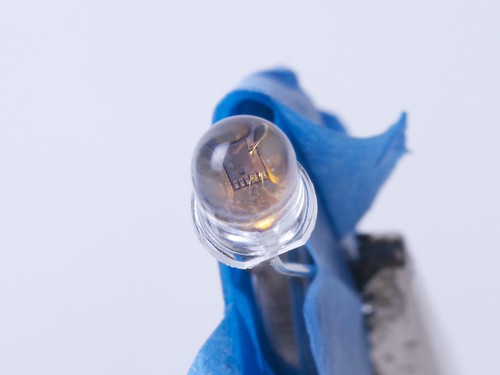 Looking down into the barrel of the LED (at an angle), you can actually use the LED’s lens as a magnifying glass to look at the flicker chip itself. Previously, we’ve used this kind of technique to take a close-up look at LEDs. 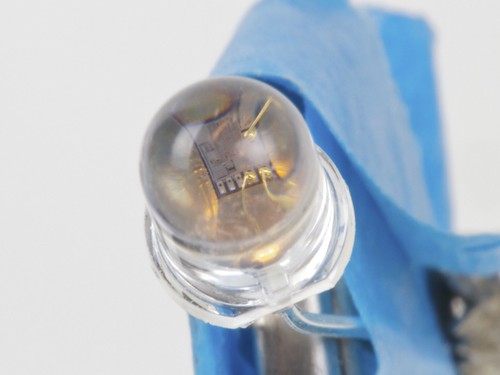 From the top here, the flicker-chip surface is clearly visible, as are the three gold wire bonds. One curious thing: it looks like there are additional unbonded pads on the chip. It’s not obvious what those are for, but here’s a guess: This little “candle flicker” chip has other functions as well, which could be selected by hooking up a wire bond to one of those other pads. Perhaps this chip is also used (for example) in simple “self blinking” LEDs that flash at a steady rate.

There is an interesting consequence of the way that the flicker chip works. There are only two leads, and when the LED is turned on or off, the total current through the legs of the LED is switched as well. This means that– even ignoring the yellow light coming out –we have an unusual electronic component that produces a seemingly-random sequence of currents when voltage is applied. We can use that current to control other circuitry. 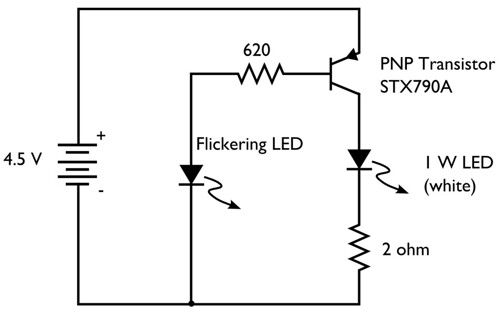 The flickering current produced by the little yellow LED can be used to drive the base of a transistor, to switch a larger current. Here, we use a transistor to amplify that current, and drive a 1-watt white LED. 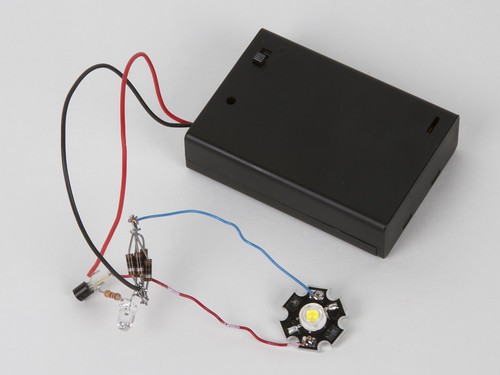 Here’s how it looks. The “2 ohm” resistor from the circuit diagram has been improvised with some 10 ohm resistors in parallel. 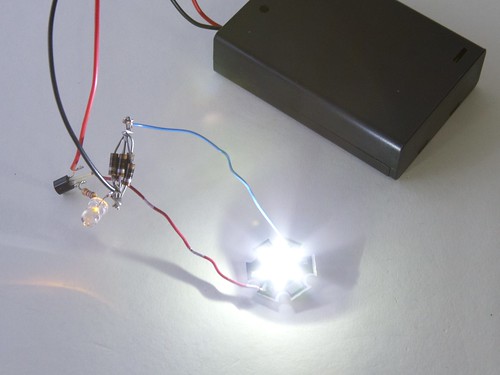 And here it is, all lit up. (Need video? Scroll down a paragraph or two!) Several of these– with high power red, orange and yellow (and maybe blue) LEDs might combine to make a pretty nice LED fireplace.

Finally, whatever you hook up to the transistor doesn’t need to be another LED. What if you drove a speaker, for example? In our video, embedded here, we show off the high-power blinking LED and also hook up a little magnetic speaker to see what our candle LEDs really sound like.

This entry was posted in Electronics, EMSL Projects and tagged LEDs. Bookmark the Permalink.

32 thoughts on “Does this LED sound funny to you?”