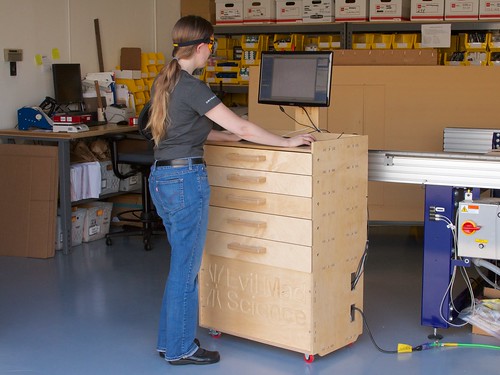 Recently we needed a sturdy, standing-height computer workstation for our workshop. So, we designed and built one. It has turned out to be one of the most useful things that we’ve ever made. And now, we’re releasing our design, so you can build one too!

A little background: This computer station is the one that we use to operate our CNC router.  Previously, we had been operating that machine from a laptop on a rolling tool chest.  While having a tool chest handy was great, the laptop wasn’t, and the height was backache-inducingly awkward.  Once we swapped the laptop out for a desktop computer that didn’t fit on the tool chest, we needed a new solution.  We needed a new computer workstation that would actually fit the computer, be comfortable for working at standing height, be sturdy enough for use in the workshop, roll where we needed it to, and offer a decent amount of storage space for tooling and supplies.

Our workstation is CNC-cut from half-inch plywood. It is rock-solid sturdy, yet comes apart easily for transport or modifications. It features a main computer bay with an optional door, five spacious drawers that can’t fall out, enough room on top to comfortably fit a laptop (in addition to the main computer), stainless hardware, polyurethane casters, and a stiff vertical “neck” that supports a swing-arm VESA monitor mount for the main computer. 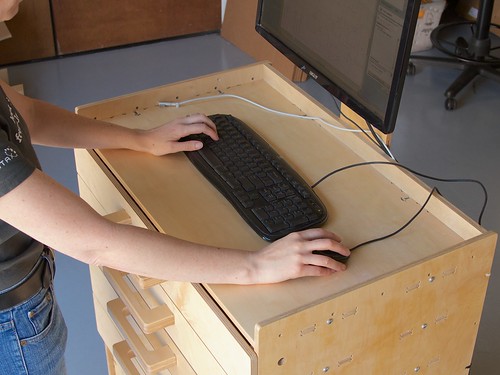 The top deck of the workstation is a flat surface 29 inches wide and 18 inches deep, situated 42 inches above the ground.  There’s ample room for a keyboard and mouse, as well as the occasional tool or notebook, and a little wall around the sides to keep everything in place. 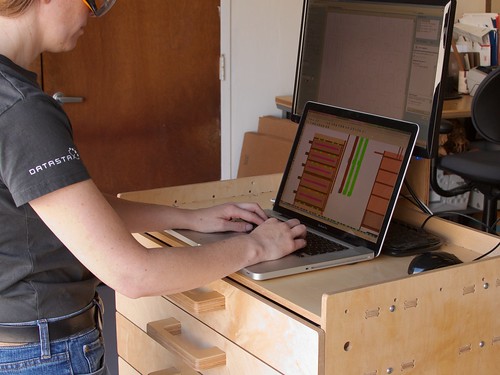 Perhaps most importantly (and as we mentioned), there’s room to fit a second laptop up on top. 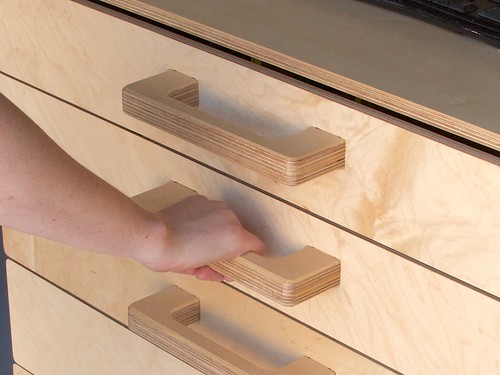 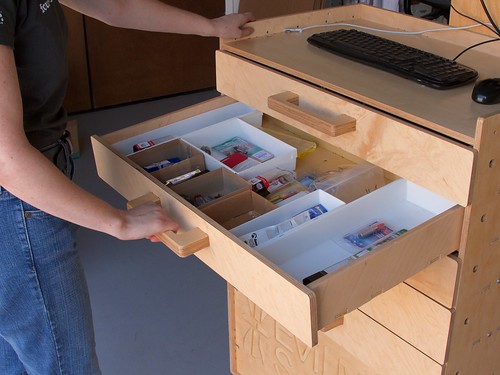 The five drawers are wide and (front-to-back) deep inside, with an interior area of 28.875 × 16.25″.  The interior vertical space of the drawers is three inches, for the top three drawers, and four inches for the bottom two drawers.

The drawer pulls are made from two layers of half-inch plywood glued together. They also have beveled edges, which we made by routing along part of their outline with a V-carving router bit. (You can also bevel them by sanding, with a little patience.)

All of the exterior surfaces of the workstation (drawers  and pulls included) are finished with water-borne polyurethane varnish. 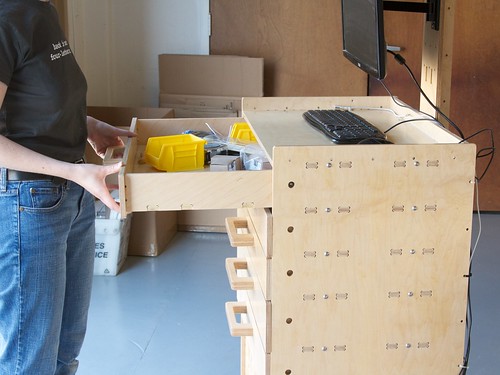 The drawers are designed so that they can easily slide in and out, but are captured to prevent them from falling out accidentally.

Our other tool chests have a mixture of plain drawers and drawers with ball bearing slides. In this case, we opted for plain rails rather than slides, in favor of simplicity, space savings, and the way that we thought it should look, feel, and sound.  As the drawers are fully built from ½” plywood, they are tough enough to handle it, and the fine wood of the drawer sides is not hidden behind a metal railing. There’s only the reliable friction of wood-on-wood, not the creaking, wobbling, and clicking that you sometimes get with drawer slides. (We ourselves ooh-and-ahh over a good drawer slide now and then, but sometimes there are other good solutions, too.)

In the photo above, you can see that the top deck of the workstation is attached to the side wall by two sets of tabs through slots and two screws (the latter are more visible in subsequent pictures).   Each screws is attached to a square nut in a T-slot in the top deck.  Similar tabs, slots, and screws are used to hold the rails that support the drawers, as well as the bottom deck of the workstation, and a few of the other structural components.  Using tabs and screws like this provides a very rigid assembly, yet allows the whole workstation to be disassembled for transportation, or to replace or modify any of the major components. 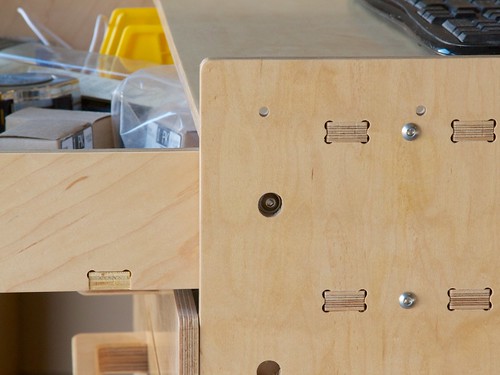 The screws that we are using are stainless steel 1/4-20 button-socket cap head screws, which give a neat, finished appearance.

Near the front of the workstation, where each drawer sits, is a through-hole.  If you look in the top of those holes, you can see one more screw head.  That screw is actually attached to the side of the drawer, and slides through a groove on the interior of the workstation’s side wall. When it gets to the front of the groove— in the position shown — it acts as a stop to prevent the drawer from falling out.  The through hole is provided so that you can insert or remove the screw, to lock the drawer in place or to remove it. 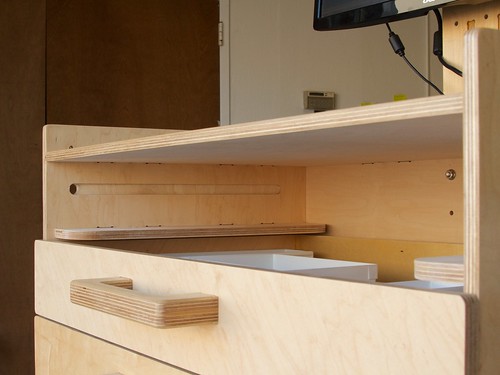 If we remove the top drawer, you can see the groove that constrains its motion. You can also see the rails that the top drawer slides on.

These small rails are used to support three of the drawers.  For structural and isolation reasons, the middle drawer and bottom drawer actually have full-width platforms beneath them. 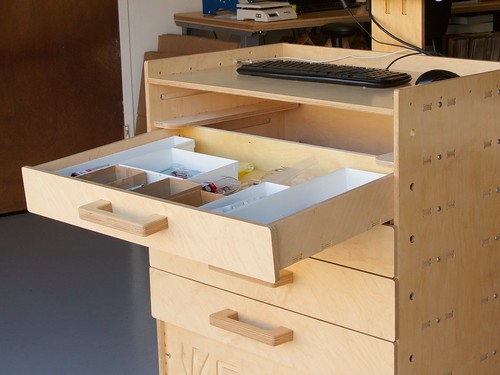 And, fully pulling out the second drawer, you can see that the rails above also prevent this drawer from tipping out. 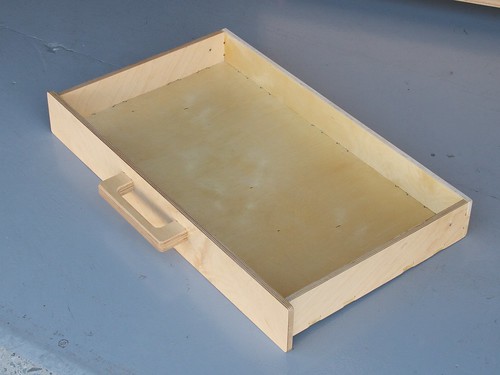 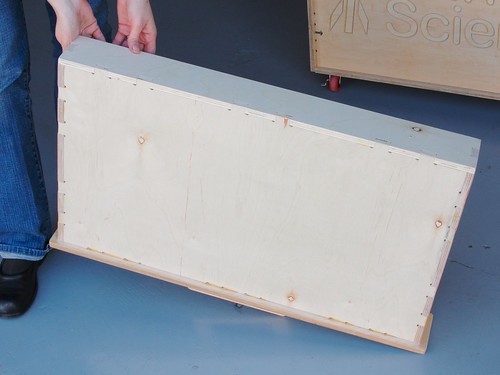 Here’s what one of the drawers looks like on its own. The front and sides are made of the same finest-grade maple-faced birch plywood as the rest of the workstation.  We used a less expensive grade of 1/2″ birch plywood for the back and bottom of the drawer, which are seen less.

Each drawer is assembled with interlocking tabs and held together with wood glue. The bottom, back, and two sides are glued together first. Then this assembly, which has short, 1/4″ deep tabs sticking out towards the front, is mated and glued to the drawer front, which has a set of machined pockets (recesses) positioned to receive those tabs. 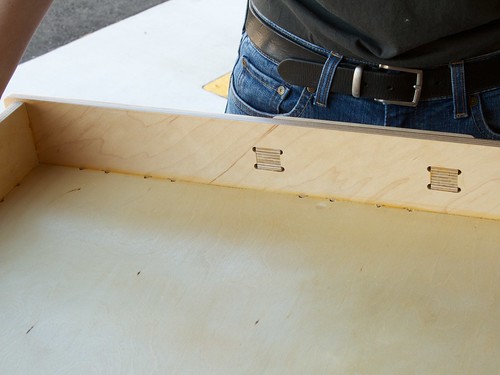 Finally, the drawer pull— again, made of two layering two 1/2″ thick cutouts —is inserted from the front of the drawer and glued in place. 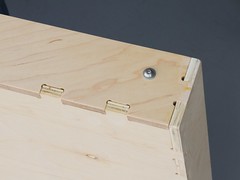 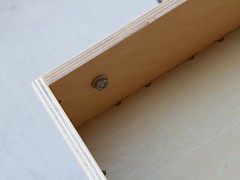 The drawer stop is a short (3/4″) button-socket cap head screw though the side of the drawer, with a lock nut on the inside to keep it in place.  We’ve found that adding a 1/2″ OD washer underneath the head of each screw gives more reliable performance. 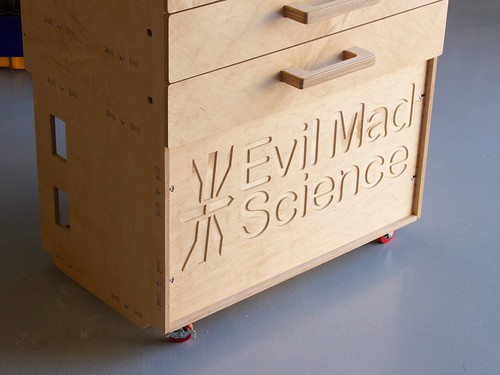 Down below the drawers is the front bulkhead of the computer bay.  We carved our logo into this part; you may want to leave it blank or add your own logo instead.  The bulkhead is held in place by four sets of tabs and screws with T-slots on the left and right side.

Down yet further, there are four 2″ diameter red polyurethane casters: two that rotate and two that do not.  Each is rated for 100 pounds, giving the full workstation a potential capacity approaching 400 pounds. 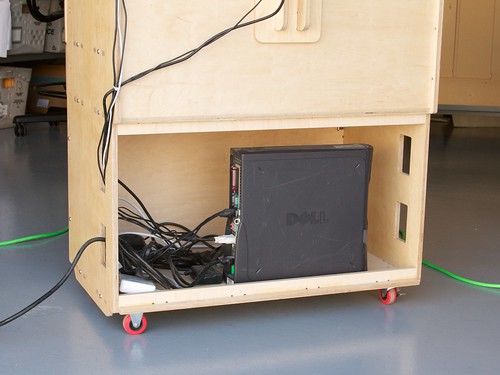 The computer bay is visible on the back side.  (And, please excuse our rats nest.)

The top and bottom sides of this compartment are solid pieces of wood, rather than just rails.  The casters are bolted to through the bottom face, using four sets of button socket cap screws and hex lock nuts each.

Our original intent was that this could be a dust-resistant environment for our computer, so the power and other cables are routed through side holes that can be plugged with low density foam or other filter media.

You may also notice that there is a small lip wall, 1″ high, protruding from both the floor and ceiling of the computer bay.  This provides a solid surface— a ring all the way around, —that you can cap. 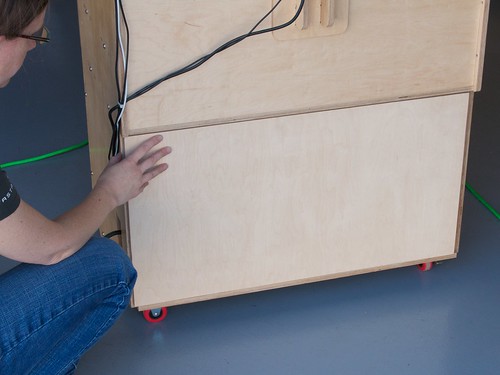 The rear cap is a rectangle of plywood, positioned where this mockup board is located.  Our plans include this optional board, and two draw latches positioned on either side to hold it in place.  Additionally, you may want to put a cork gasket between the two for a snug fit; we’ve called out a sticky-back 1/2″ wide cork strip in our list of parts.

Aside: Why haven’t we sealed up the computer bay on our own workstation?  Turns out that dust has been much less of a problem than we thought— our dust collection system works very well —while our CNC machine’s software *ahem* requires us to hard reboot (by physically holding down the power button) on an all-too-frequent basis.  As a workaround, we may attach a regular light switch fixture to the side of our workstation as a power switch at some point. 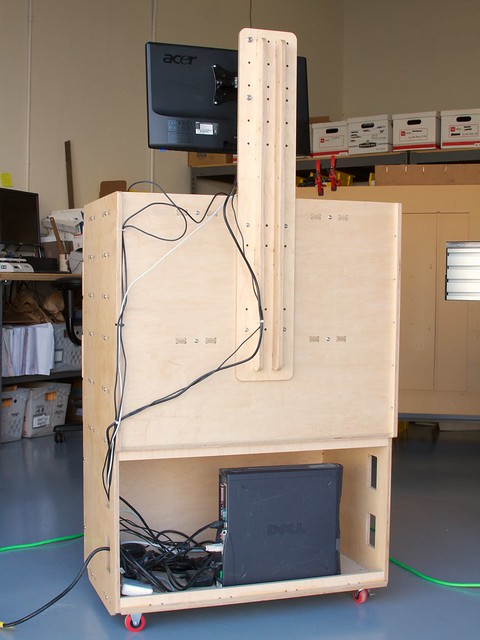 The “neck” of the workstation is bolted to its back side, using button-socket cap screws and locknuts located behind the drawers.  The neck consists of three pieces of wood: a flat piece with mounting points for the VESA monitor mount and two stiffening ribs, glued into it.

From the back, you can see that the top deck and the platform supporting the middle drawer are anchored by tabs that stick into the back face of the workstation. 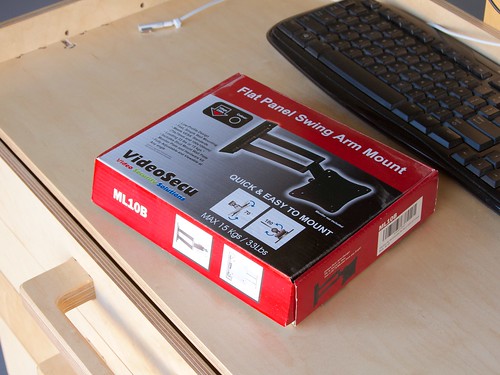 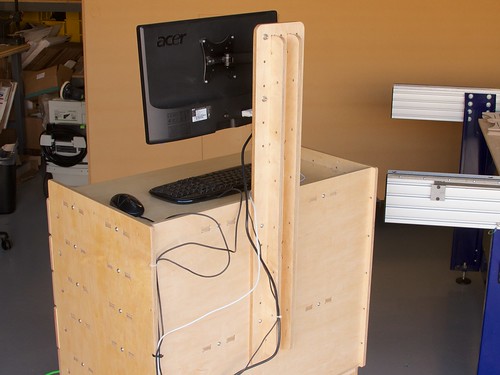 Our computer’s monitor is an inexpensive LCD with a VESA mount that is revealed once you remove its built-in stand. For the VESA bracket, we found the VideoSecu ML10B (compact, low in cost, and reasonably well made) to be a good option and designed the “neck” of the workstation with hole spacings for it. 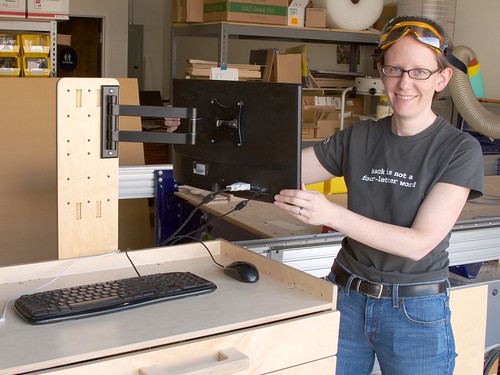 For the monitor to be exactly centered when retracted, the rear base (wall-mount part) of the VESA bracket needs to be offset sightly from center.  Our design has two sets of offset holes of the correct spacing (in case you need it to swing left instead of right) and three possible mounting heights.

The two mounting holes in the rear base of the ML10B are a bit under 1/4″, so won’t automatically fit the same screws that we’re using elsewhere.  You can use smaller diameter screws (and accept a little bit of slop in where it mounts to the neck), but it turns out that you can simply enlarge those holes with a regular 1/4″ diameter drill, and then mount it without any slop.  The base is made of soft cast aluminum that drills out easily, and there appear to be no structural or other downsides to this modification.

We designed the workstation in Inkscape, to be CNC cut from 1/2″ plywood, requiring only a 1/4″ router bit.   These files contain the outlines to cut, fabrication notes, as well as a legend for which part is which:

Additional hardware, all the little bits: 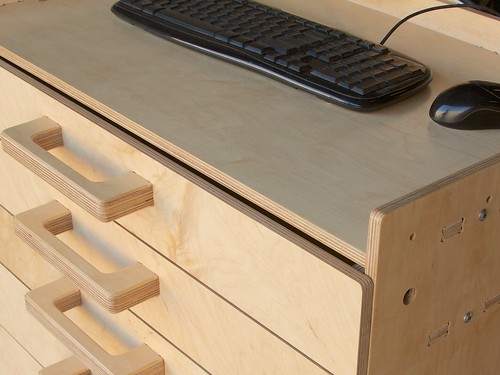 And finally, an erratum:  We’ve made one change to the design since fabricating our own.  As you can see in the picture above, the front of our top deck is flush with the sides of the workstation, not with the front of the top drawer.  In our design files, we’ve updated it such that the top deck now extends another half inch forward (with rounded corners), so that it’s flush with the front of the drawers, and does not leave any gap.  And, since it’s all put together with screws, we plan to fabricate one and replace our own top deck one of these days. 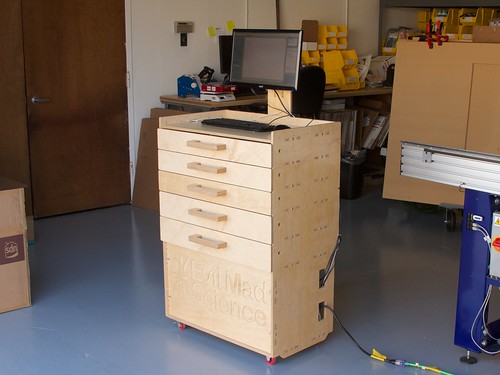 And there you have it.  We’re releasing this design under the CC-BY license, strictly as-is, under the hope that it will be useful.  If you build your own, or have made improvements, we’d love to hear about it.

This entry was posted in EMSL Projects and tagged cnc. Bookmark the Permalink.

38 thoughts on “Build Your Own CNC Workstation Cart”