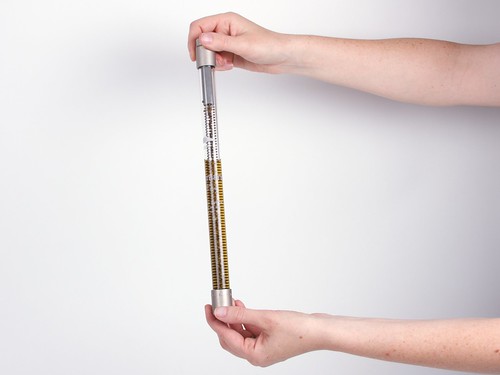 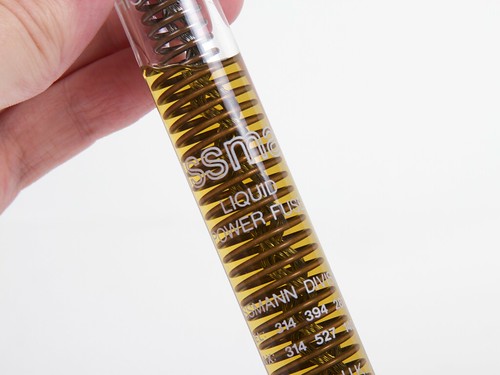 Here’s an interesting find: This rather large mad-sciencey-looking component is a Bussmann type 23L1F15E, liquid-filled power fuse. What is all that stuff in there, and what’s it doing? It turns out to be a clever old solution to a tough problem, involving springs, wires, and solder, not to mention the mystery fluid!

We’re used to thinking of fuses as simple devices, and indeed a great many of them are.
For example:

This is a garden variety fuse, of the kind that you might find in a tabletop appliance. The “active” part consists of two metal endcaps (that snap into the fuse holder of your appliance), with a thin wire connected between the two ends. If you pass more than the rated amount of current through the fuse, the thin wire heats up enough to soften and melt. In doing so, the wire breaks at at least one point, severing the electrical connection between the two endcaps.  (A fuse that has been activated often looks the same except for a small break in the wire.)  The outer cylinder is often glass (being clear and non-conductive) so as to give a visual indication of whether or not the fuse has been activated.   This particular fuse is rated for operation at 250 V, and while we can’t see the current rating, it’s likely 0.5 A or below, judging by the thickness of the wire. 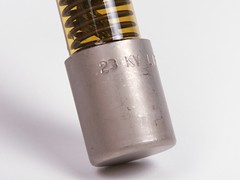 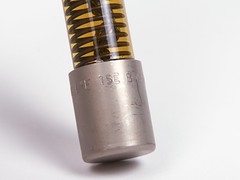 The difference in appearance between these two example fuses is almost entirely due to the higher voltage rating.  Two fuses that differ only in current rating usually have very similar appearance otherwise.   For example, automotive fuses rated for 3 A or 30 A often only vary in the width of the metal fuse element and the labeling and color of the plastic case.

So why can’t we just use a scaled-up version of the simple fuse for high voltage? Well, suppose that we did.  Then after the fuse wire melts, you have two closely-spaced wire ends with high voltage potential between them and a gas inside (which may even include a non-negligible vapor pressure from the metal that just melted).   These conditions are nearly ideal for creating a sustained electric arc between the two ends, just like you find in intentional discharge tubes like neon signs, sodium vapor lamps, and fluorescent lights.

And, that’s exactly what you don’t want to happen in your fuse: An electric arc between the two ends would conduct electricity between the two ends, completely defeating the purpose of the fuse, which was to sever the electrical connection.   A high voltage fuse, then, might want to have provisions (1) to further separate the two wire ends to reduce likelihood of arcing and (2) to quench any initial arc that should form before the ends can be separated. 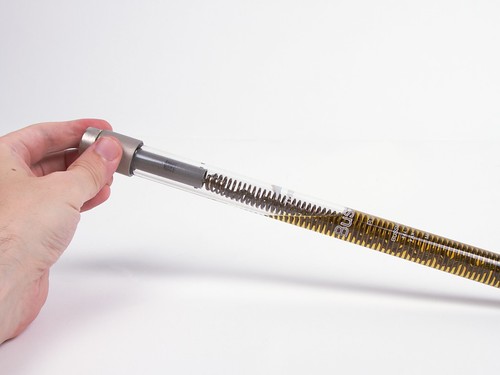 So, let’s take a closer look inside the glass envelope of our fuse.  Aside from the liquid, there is a gray metal tube at the top end (it has a “this way up” label), what appears to be a loosely twisted pair of wire braids (likely stainless steel or tinned copper wire), going from the metal cylinder all the way to the opposite (bottom) end of the fuse, and a bronze-colored extension spring, that goes from the bottom end of the fuse almost all the way to the metal cylinder. 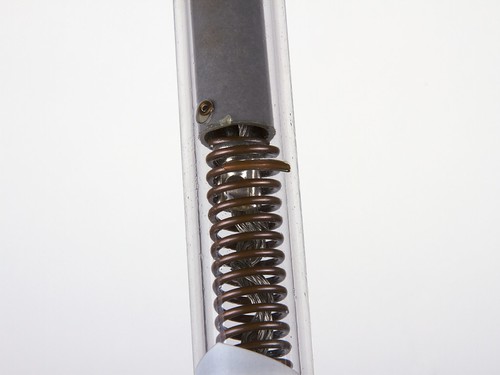 The wire braid (which you can see inside the spring) goes from the bottom cap of the fuse, wraps once around the rivet, and goes back down to the bottom cap of the fuse.  Just below the rivet, there is a metal fastening sleeve of some sort, crimped onto the wire braid so as to affix the sleeve in place.  The crimped sleeve, in turn, is the feature that serves to hold the bronze spring in extension: Its upper end is wrapped around the sleeve. 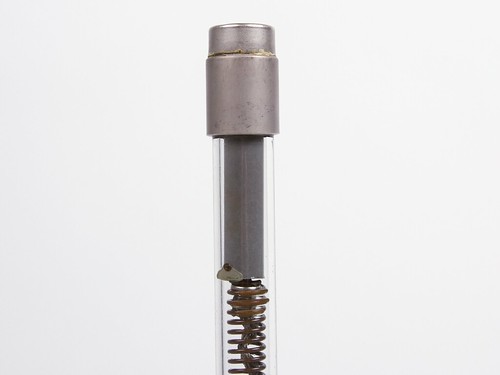 We had originally guessed that the crimped sleeve must be the fusing element— the thing that melts when it gets hot.  However, this isn’t the case.  If that sleeve were made of low-melting point solder and were to melt away, it would cause the spring to snap back to its relaxed position, but that action would not actually interrupt the flow of current; the wire braid would remain intact.

Rather, to actually break the electrical connection, the fusing element must either (A) be the rivet pin or (B) hidden in the top endcap, above the gray tube.  And of those two, it appears that it has to be in the upper endcap.

Why?  Because the rivet pin has to withstand the force of the spring in narrow beam.  That’s a big, strong spring, so the thin rivet pin probably can’t be made of a soft material (like solder) or thin wire of harder material that could slowly deform over time.   Separately, if the rivet pin were the fusing element, it would be essential to keep the wire braid and spring from directly touching the metal cylinder. From what we can tell, there is no good provision in place to keep those separate.

So there we have it: When the current setpoint of the fuse is passed, the fusing element in the upper cap melts, breaking the electrical connection and releasing the gray tube, which  is immediately pulled down, into the liquid by the spring.  In doing so, it makes a huge splash, momentarily filling the upper part of the fuse with a jet of the fluid.    Assuming that the liquid is one that can extinguish electric arcs, this accomplishes both needs for high voltage fuses, separating the two end conductors and quenching the arc. 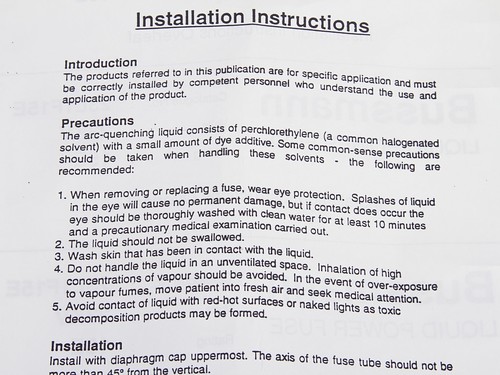 The liquid inside the fuse is perchloroethylene, better known as “dry-cleaning fluid,” with a colorant so that you can see the level.  The installation instructions for the fuse suggest that you “avoid contact of liquid with red-hot surfaces[…].”  That’s excellent advice; it can decompose into phosgene at high temperatures. 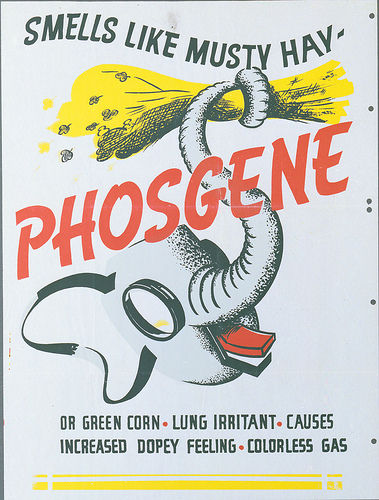 Phosgene, of course, is famous for its use as a chemical agent during World War I.

Despite the perhaps not-kid-friendly liquid filling of the fuse, it’s still a magnificent piece of work. IEEE lists the development by Schweitzer and Conrad of the liquid power fuse as one of its milestones, for the first reliable high-voltage power fuse, in 1909. 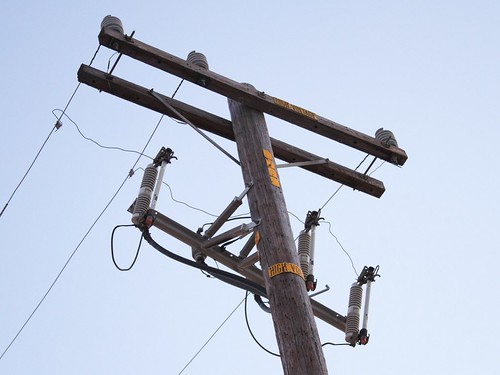 For the most part, the liquid-filled fuses have been replaced by a modern, liquid-free version, the boric acid expulsion fuse (example).  These work in a similar fashion— just without the liquid.  A heavy spring is held taut by a fusible silver element.  When the fusible element melts, the spring retracts one end of the wire inside the fuse, separating the two wire ends.  The electrical arc between the two wire ends vaporizes a supply of boric acid (a crystalline solid), and the resulting vapors quench the electric arc.

Fuses like these— along with similar types filling this electrical niche —are everywhere, still today.  Just look up.  In this photo, there are three skinny white objects (“fusible cutouts”) atop this power pole, likely protecting transformers below.

This entry was posted in EMSL Projects and tagged ladyada. Bookmark the Permalink.

4 thoughts on “A Liquid Power Fuse”