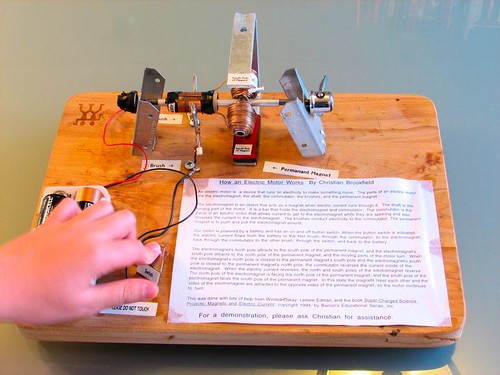 I was looking in a book for a science project idea when I saw instructions for building an electric motor. My parents approved the idea, so Windell and I went looking for parts.

We used a quick release skewer from a bicycle and an aluminum pipe for the shaft. We used speaker wire for the coils in the electromagnet. We made the poles of the permanent magnet with two right angle brackets. We used a powerful fridge magnet as our permanent magnet. The commutator was made with a piece of rubber, a piece of cardboard, and a copper pipe cut in two. We used sheet copper and an adhesive rubber button to make the switch. Windell gave me a battery cage that holds four C cells. The shaft supports are made of steel. I don’t know their intended usage. The base is an old cutting board. The right angle brackets, magnet, copper pipe, and shaft supports came from a wonderful, independent hardware store in Boulder, Colorado called McGuckin Hardware. The other parts came from Windell’s workbench or the kitchen.

We built the electric motor by coiling the speaker wire around an iron rod approximately 500 turns for each coil with a power drill. We glued the commutator to the shaft with rubber and cardboard to fill the gap between the commutator and the shaft. We couldn’t use metal between the shaft and commutator because it would cause a short circuit. We then attached the the electromagnet to the shaft with super glue. The ends of the speaker wire are taped to the commutator with electric tape. Next, we bolted the shaft supports into place and stuck the skewer through one support, the aluminum shaft, and the other support. We then screwed the cap the skewer to keep it in place. After that, we bolted the right angle brackets together and screwed them in place. Then we made the brushes with thick wire by wrapping them around a screw and bending the ends so that they would just touch the commutator enough to transmit electricity but not enough to significantly slow the motor down. We also had to make sure the brushes wouldn’t cause a short circuit during the switching between commutator plates. We then installed the battery case and switch. The switch is just two pieces of bent sheet copper with an adhesive rubber button. Lastly, we placed the permanent magnet on the lower right angle bracket. 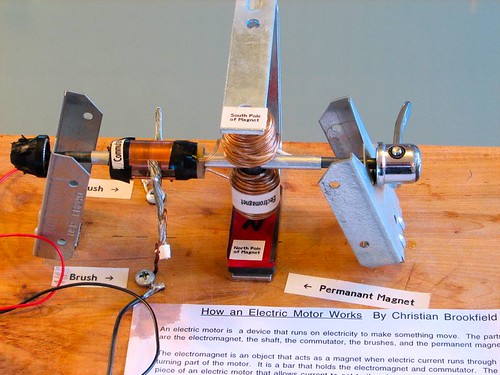 In Make Magazine Volume 1, there is a Howtoons comic about making an electric motor. We did not use this to help us in building ours; Make Magazine didn’t exist yet. The motor in Howtoons is somewhat simpler than mine, but it is not the simplest. The Howtoons motor has only one coil instead of two and its coil is not wrapped around an iron rod like mine. Mine, however, has a stronger electromagnet and runs longer than the Howtoons motor. My motor also has the advantage of two places where the permanent magnet repels/attracts the electromagnet instead of one. 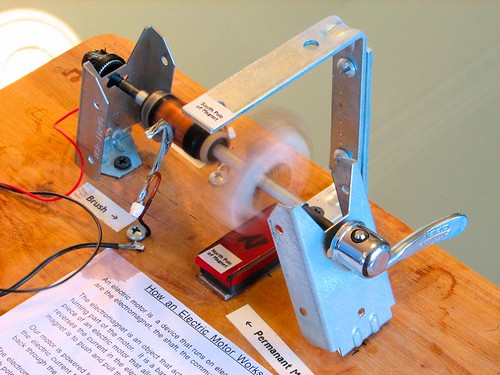 Here is the text that is written on the electric motor base:

How an Electric Motor Works

An electric motor is a device that runs on electricity to make something move. The parts of an electric motor are the electromagnet, the shaft, the commutator, the brushes, and the permanent magnet.

This entry was posted in Electronics, EMSL Projects and tagged diy, electronics. Bookmark the Permalink.

10 thoughts on “Building an Electric Motor”