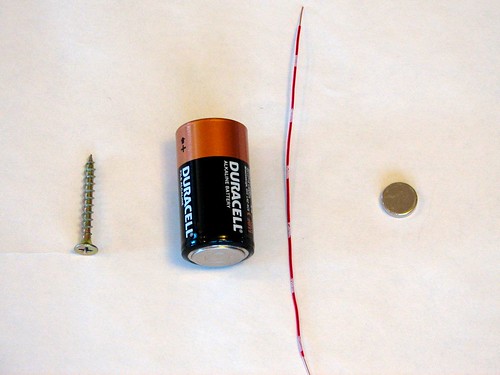 You have one drywall screw, one 1.5 V alkaline cell, six inches of plain copper wire, one small neodymium disk magnet, and no other tools or supplies. You have 30 seconds to make an electric motor running in excess of ten thousand RPM. Can you do it? Surprisingly enough, you can.

Let’s take a step back. The most common type of electric motor is the brushed dc electric motor. This is the kind that you’ll find inside essentially everything that moves (or shakes) and runs on batteries. This type of motor attracts an electromagnet towards a permanent magnet. When the two are close enough,the polarity of the current through the electromagnet is reversed, so that it now repels the permanent magnet, and thus keeps turning. It’s quite easy to build a working model; Christian built this example for his third-grade science project.

A simpler yet motor (sometimes sold as the sold as the “world’s simplest motor“) just switches off the current for half of the cycle, letting the angular momentum of the spinning motor armature carry it through. In Make Magazine Volume 1, the Howtoons comic shows how to make an electric motor that works that way.

None of these is really the simplest motor. The real champion is the homopolar motor.

The ingredients (L-R): One ferromagnetic screw, one battery cell, a few inches of copper wire, and a neodymium disk magnet.I used a drywall screw both because it has a flat head and because it’s easy to tell when it’s turning. You can use a nail instead. The battery needn’t be any particular type; an alkaline C-cell works fine and is easy to hold. Just about any copper wire will work fine for this application. I used some wire with partially stripped (and partially striped) red insulation that is easy to see in the photos. Bare copper will work just as well.

The magnet came from an LED throwie with a dead battery. The best magnets for this job are neodymium disc magnets with a conductive plating. You can get them from plastic toys or buy them from a number of magnet discount and surplus shops. 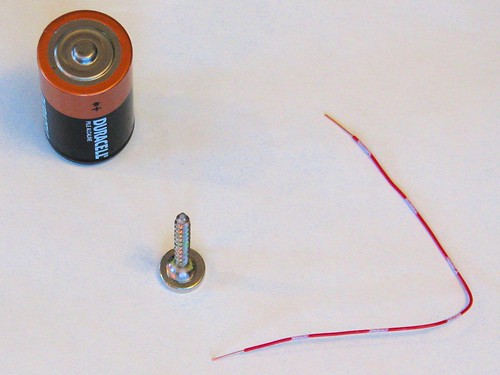 Set the screw on the magnet, bend the wire. 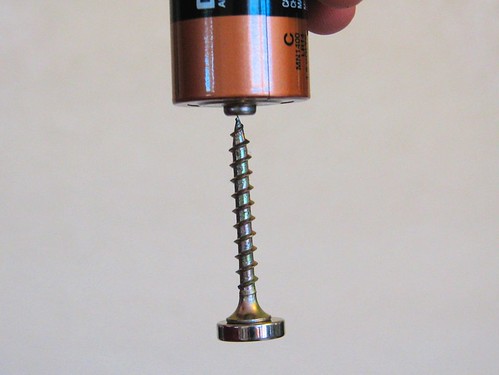 Attach the magnet to one end of the battery. The weak, single-point contact that you are making serves as an low-friction bearing. I like to attach it to the button end, but the other end will work as well. (If you do so, the motor will spin the opposite direction. You can also reverse the direction by flipping the magnet up side down.)

(Note to physics geeks: The heavier your magnet plus screw system is, the lower the friction will be, right up to the point that magnet isn’t strong enough to hold them any more. This is because the friction force is proportional to the normal force. In other words, a bigger magnet is usually better.) 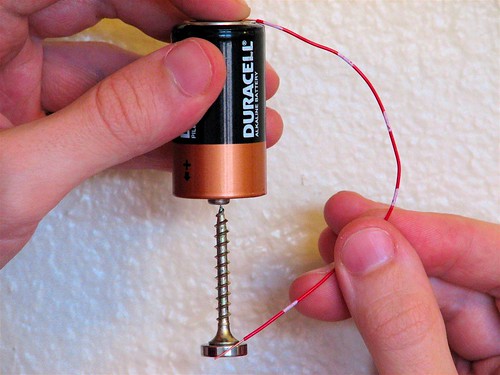 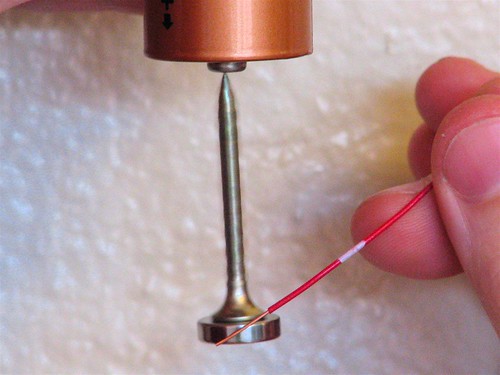 Here we go: Lightly touch the free end of the wire to the sideof the magnet. The magnet and screw start to spin immediately. We can get ours up to 10,000 RPM in about fifteen seconds.Watch out: The screw and magnet can easily fly out of control, and you do not want that screw ending up in your eye. Also note that some of the components, like the wire, can get very warm while you’re doing this. Wear safety glasses and use common sense!

Wondering what to try next? You may also like this project, which is about building a similar sort of motor that spins water instead of a magnet.

How does this work?

When you touch the wire to the side of the magnet, you complete an electric circuit. Current flows out of the battery, down the screw, sideways through the magnet to the wire, and through the wire to the other end of the battery. The magnetic field from the magnet is oriented through its flat faces, so it is parallel to the magnet’s axis of symmetry. Electric current flows through the magnet (on average) in the direction from the center of the magnet to the edge, so it flows in the radial direction, perpendicular to the magnet’s axis of symmetry. If you took physics at some point, it’s possible that you’ll remember the effect that a magnetic field has on moving electric charges: they experience a force that is perpendicular to both their direction of movement and the magnetic field. Since the field is along the symmetry axis of the magnet and the charges are moving radially outward from that axis, the force is in the tangential direction, and so the magnet begins to spin. Neat! For a slightly more thorough explanation, have a look at the end of this article, which is about a magnetohydrodynamic homopolar motor.

It’s called a homopolar motor because you never need to reverse the polarity of any motor component during operation, unlike the other types of motors that we’ve described. I first learned about this type of motor in an article by David Kagan, in the magazine The Physics Teacher, February 2005. It turns out that it’s been around longer than that: it was invented in 1821 by Michael Faraday. Somewhat surprisingly, this is more than just a curiosity: motors of this design are currently being developed for quiet, high-power applications. 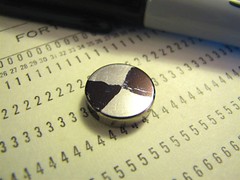 Final note: How do we measure the rotational speed of the motor?

You can get an optical tachometer for $20 or less, intended for use with model airplanes. I have model LXPT31 from Tower Hobbies, which is expecting to see an airplane propellor with two blades. I added two wide black stripes to the magnet with a Sharpie, which allow the tachometer to read the rotational speed of the motor. Pointing the tachometer at the magnet and spinning up the motor, we were able to clock a speed above 10,000 RPM after spinning up for about fifteen seconds. Spiffy.

This entry was posted in EMSL Projects and tagged diy. Bookmark the Permalink.

118 thoughts on “How to make the simplest electric motor”