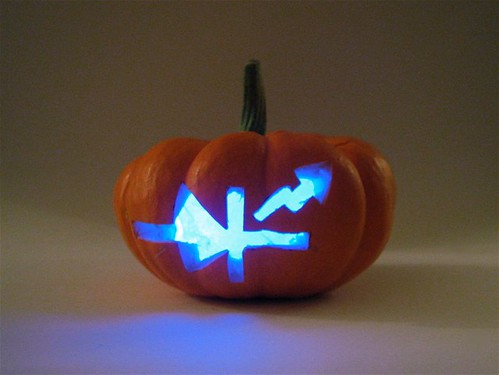 Halloween is tomorrow! Do you want to bring a carved pumpkin to work, but aren’t allowed to burn candles in your cubicle? Do you want to carve a mini-pumpkin that’s simply too small for a candle?

Or are you just running late and need to make a procrastinator’s pumpkin?

If you said yes to any of these questions, we just might have the solution that you’re looking for. Here’s an easy way to make a tiny blinking-LED jack-o’-lantern.

The blinking LED circuit is borrowed from a Tirefly, a commonly available type of motion-sensitive light that attaches to the valve stem on the wheel of a bike or car. Our quick modification (less than five minutes and no soldering) defeats the motion sensor so that the LED can blink all day (or all night) for you. (For hardened geeks who want to solder something anyway, we’ll also show you how to mod the circuit to use a higher-capacity battery.)

[Update: (10/2008) A reader wrote in that they have had trouble getting the circuit to blink continuously; the tirefly circuit may have been changed. (Confirmed– It has changed!) Do any other readers have recent success or failure to report?] 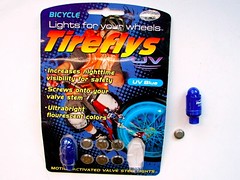 For this project, you’ll need a mini-pumpkin, carving tools (I used a regular hobby knife and a spoon), and a Tirefly. One of the cool things about Tireflys is that they are really bright. Another is that they are quite easily available– I got mine at Target!

They come in sets of two with extra batteries. You can often find them in (good) hardware or sporting goods stores in either the bicycle or automotive sections. If possible, get the “Tireflys UV” variety– those are the brightest. Of course, you can also find them online, or even get them at Amazon, but that’s not very convenient if you want a working jack-o-lantern today. 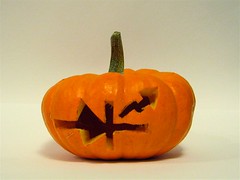 Since the actual electronics part of the project is so quick, you may want to start by carving the pumpkin. I hollowed out my little pumpkin and carved it to represent the circuit diagram symbol for a light-emitting diode.

However, you get to choose what you carve, whether it’s a baby Cylon or Dalek or Fying Spaghetti Monster or Ellen or whatever. =) 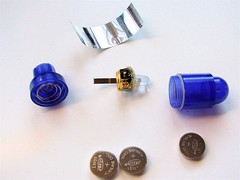 Okay, that was the hard part, so let’s do the easy part. Disassemble the Tirefly by unscrewing the two halves of the housing, and then pull out everything that’s between them. Pay attention to which way the batteries were pointing in, since you’ll be reassembling this.

Besides the two halves of the housing, there are three tiny alkaline batteries, one shiny thin plastic insulator, and the active components of the blinky circuit. 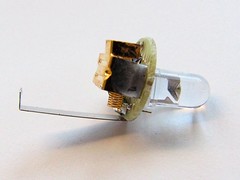 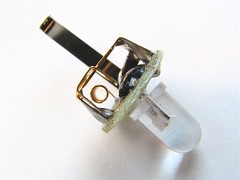 Here’s a closer look at the active components of the circuit, from two different angles. There’s a little printed circuit board that has an LED on one side and several things, including some funny mechanical bits, hanging off of the opposite side. The long piece that sticks out the back side is to connect to the back side of the battery. Closer to the board, there is a flexible little coiled gold spring. The spring sits close to, but does not touch, several nearby metallic shields. (Click on either of the pictures above to get a better view.) The big idea is that when the circuit is bumped, the spring deforms until it hits one of these shields, and that contact acts as a switch to turn on the blinking sequence for a few seconds.

It turns out that being motion-activated isn’t such a good state of affairs for a jack-o’-lantern, because you don’t want to have to smack it every 30 seconds to turn it back on. To defeat the motion switch, you can trick it into thinking that it is always detecting motion, by moving the spring so that it is always in contact with the shield. There are two easy ways to do this. One is to pull the spring back, out of the shield, and to the side, so that it holds itself against the outside of the shield. The other way is to pull the end of the spring out the other way through the shield, and catch one of its turns on the edge of the shield. Do which ever seems easiest; either will do the job. In any case, I suggest using a miniature screwdriver or a paper clip to maneuver the tiny spring. 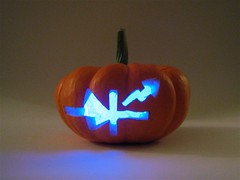 That’s it, so reassemble your Tirefly and drop it into your pumpkin. It should start to blink continuously as soon as you’ve put the batteries back in. Because the light is so intense and directional, I’ve found it helpful to put a piece of tissue paper, or even a tissue, in the front of the pumpkin to act as a diffuser. The photo here has a piece of tissue paper inside, and you can see that it gives a fairly uniform glow. When you’re ready to turn off your Tirefly, unscrew it to take the batteries out, and (if you like) let the spring go back to its original and fully upright position.

The little batteries that come with the Tireflys are probably fine for a day or so of continuous operation. If you really want them to run for a lot longer, you can instead hook your Tireflys up to a much larger battery.

There are two power terminals on the device. The positive terminal of the three series battery cells contacts the shield (around the spring) and the negative terminal contacts the long arm that sticks out from the printed circuit board. We will connect a wire to each of those points to the ends of a new battery. 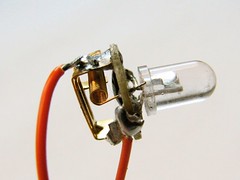 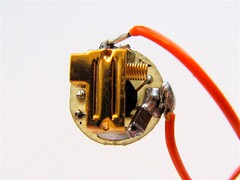 To make the circuit a little more compact, I cut most of the long arm off, until there was only a stub left to solder to. I attached a wire both to that point and to the outside of the shield. In both cases, i used an orange insulated wire under the theory that it would be harder to see inside the pumpkin. It also, apparently, makes it harder to tell which wire is which in the photos. (Doh!) Just remember that the one contacting the shield is the positive one. 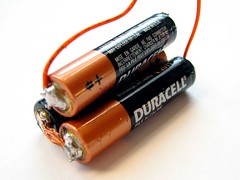 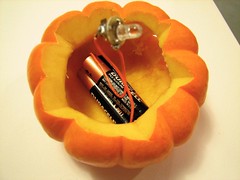 I replaced the three tiny alkaline cells with three alkaline AAA cells, which are extremely large in comparison. The three battery cells were connected the three batteries in series by directly soldering to their faces, using plenty of flux and two pieces of desoldering wick to connect them. This makes a strong and permanent bond. Finally, the two wires to the Tirefly light were added.

Putting it all together (right), the batteries and the LED fit comfortably inside this mini pumpkin. The case of the Tirefly is no longer needed, and the circuit can be turned on and off as before, by manipulating the position of the motion detection spring. The battery life should easily exceed that of the carved pumpkin, so be sure to take it out before the pumpkin gets moldy, and save your circuit for next year, or for other decorations.