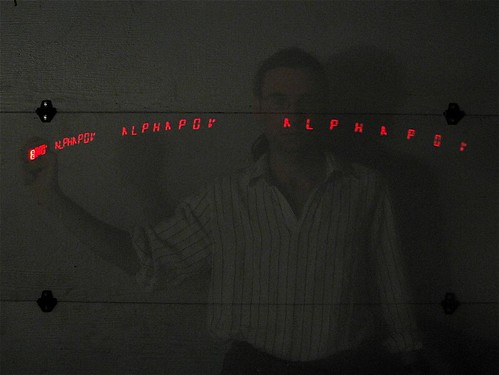 You have probably seen persistence of vision (POV) toys at some point– little LED dot-matrix displays that, when waved around, display a picture or a message that seems to hang in mid air. We’ve been playing with 16-segment LED displays lately, and it some point it occurred to us that we’d never seen an alphanumeric POV display. So, we went ahead and tried it out, and hey– it works! AlphaPOV is the result. It’s a neat effect since the clearly defined segments– designed for text– introduce a certain degree of legibility into the display.

The starting point for building this project is our LED Micro-Readerboard. Normally, the micro-readerboard shows one character at a time, so that you can read it sequentially while holding it still. Here, we use a (very slightly) modified version of the firmware that blinks the characters on and off at high speed. Read on for details, AVR source code and a few more pictures. 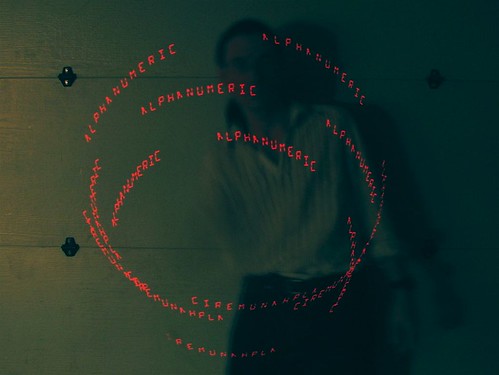 In any sort of technical context, persistence of vision is a slippery term. Most directly, it describes the largely discredited notion that images can “accumulate” on the retinas of your eyes over short periods of time. That is more or less a myth that has been perpetuated to explain (among other things) why motion pictures– changing at only 24 frames per second– appear to be moving. Besides this illusion of apparent motion, there are a few related phenomena that tend to be lumped into what is colloquially known as persistence of vision. One is the ability of your mind to perceive a whole scene when only part of it is visible at a time. The effect is most apparent when you look through the crack of a door or the narrow slit of a wooden fence: by moving your head side-to-side you can see everything on the other side. Fast examples of that very phenomenon– like the scanning line of a CRT or other cyclic displays — can lead to an apparently constant image through a third phenomenon known as flicker fusion.

In any case, it isn’t our intent to delve into the mechanisms by which we perceive things. Rather, let us note that we use the term “persistence of vision” in its common sense– to describe phenomena that relate to visual memory– and, there is a lot more to human perception than what goes on in the eyeball. (If do you like thinking about illusions, check out this site.) 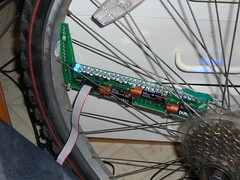 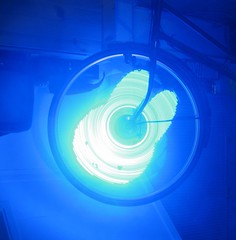 There are a lot of good DIY POV projects. Two good beginner projects are the
MiniPOV3 and SpokePOV, both of which are available as kits. Shown above are two pictures of the SpokePOV– still and in use (by flickr users thejof and somos_cuba).

Amongst the commercial offerings (which all seem to be derived from efforts of the DIY community), this LED Art Fan stands out. 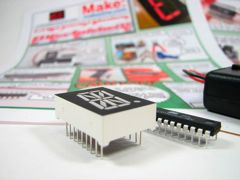 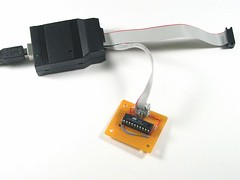 As we noted earlier, the starting point for building this project is our LED Micro-Readerboard, for which we are using a modified version of the firmware. So, the first thing to do is to gather the parts and instructions for that project. Whether you are modifying one of the kits (which are available from the Make Store) or building it from scratch, you will need a programmer and a target board to program (or reprogram) the microcontroller before soldering it to the LED*. You will also need a working copy of the GNU AVR toolchain; see this post for some hints on where to get started. 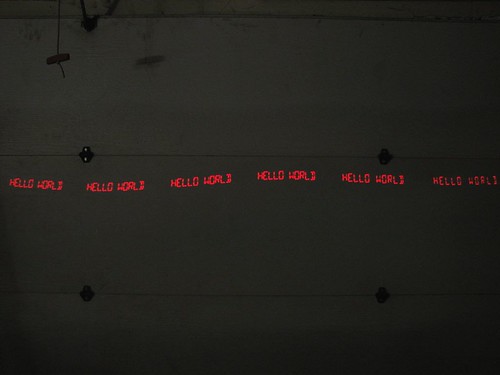 Since the AVR is now programmed correctly– and verified– you can then go ahead and assemble it according to the usual set of instructions. Assuming that everything goes together correctly, you should have a functioning AlphaPOV display now!

One of the default phrases that is in the AlphaPOV firmware is “HELLO WORLD”, as seen above. To take this photo, I put the camera on auto timer with a 2.5 s exposure time. I then held the display at my side and walked at a normal pace by the camera when the exposure started. 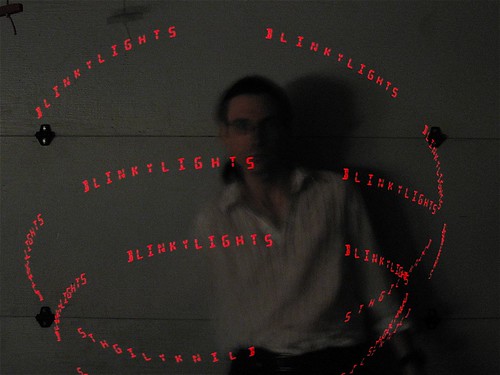 In the “regular” version of the micro-readerboard firmware we never light up the whole character that we’re displaying. Instead, we light up each segment for the character, in turn, for a very brief fraction of the time. By doing this, we can keep the instantaneous power consumption of the device very low– since only a single LED is ever driven at one time. This can lead to a long battery life at the expense of brightness. If, however, you rapidly move that display from side to side, you will not see individual letters, just the lit-up segments. To see the letters when we move the display rapidly from side to side, we instead need to actually display whole letters at a time. Furthermore, they need to be bright, and properly spaced apart– in time– so that when they appear, they are not blurred but look as though they were seen with a strobe.

In practice, all of these options are just simple tweaks to the firmware; especially because an option to use a non-multiplexed display was part of the original firmware. 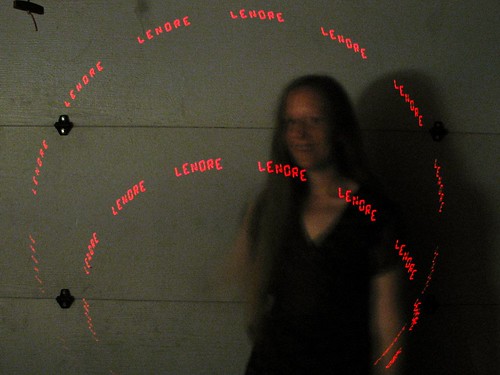 What else you do with it is up to you. Make a name tag?

You can certainly take the idea of a POV display and run with it in other directions as well; all you need is a microcontroller and an LED display of sort. You can even get away with repeating this project using a seven-segment display… if you don’t mind sticking to
beghilos.

8 thoughts on “AlphaPOV: An alphanumeric persistence of vision display”