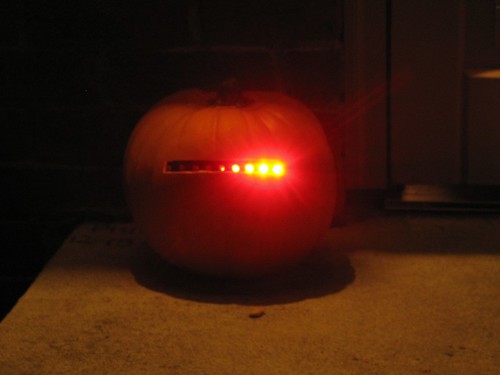 Today we’re releasing a new open-source project and kit, which is an updated approach to the “Larson Scanner.” The Larson scanner is named in honor of Glen A. Larson, the man responsible for producing both the original Battlestar Galactica and Knight Rider television shows, and consists of a set of red LEDs that scan back and forth.

Three years ago, we showed how to make a Cylon Jack-O-Lantern, in what has become one of our all-time most popular tutorials. The circuit for that project was based on a 555 timer, driving a 4017 decade counter, and has 6 pixels of resolution. To create the incandescent fading effect, we added low-pass transistor drivers. We also wrote up a version of that article for the 2007 Make Magazine Halloween special, which included a slightly nicer version of that same circuit.

And while it’s been popular, we’ve always had some nagging reservations about it, and in particular its battery life. This year, we decided to do something about it and made a much betterversion of the Larson Scanner, and so here it is: 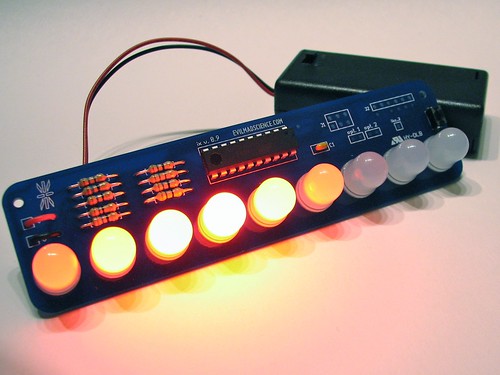 The all-new Larson Scanner is based on the ATtiny2313 microcontroller and has a few distinct advantages. First and foremost, it’s power efficient. While the old version based on the 555 and 4017 can be built from off-the shelf parts, it’s also a power hog, and battery life on that circuit is anything but impressive. The new version uses a low power microcontroller, and carefully manages the power to the LEDs.

Speaking of LEDs, we now have nine rather than six, and as the “eye” scans from back and forth across the LEDs, it now has silky smooth animated fading between them. To achieve the smooth scanning, up to five of the LEDs may be lit, to various degrees, at any one moment. Greyscale is achieved through high-speed software based pulse-width modulation. It’s digital but very efficient, and it looks genuinely better than any of our previous versions.

The LEDs and microcontroller have been laid out on a relatively spacious 5 inch long (12.7 cm) circuit board– big enough to fit 10 mm LEDs –and it all turns out to be the easiest to assemble kit that we’ve ever designed. 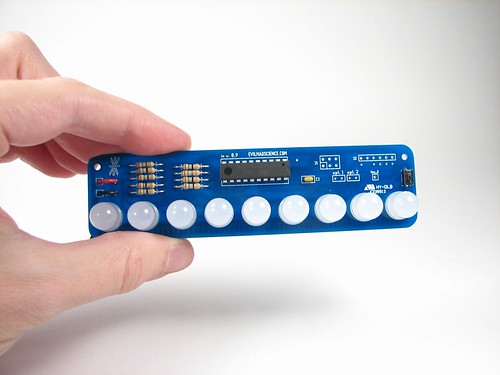 While we did incorporate a rate adjustment trimpot in the later version of the 555-based scanner, it’s actually not that convenient to adjust. In the new version, there is a pushbutton switch located on the right side of the circuit board. Pressing it allows you to choose between three basic scanning speeds (“slow,” “medium,” and “fast”), all of which use the same smooth scanning.

If you hold the button for several seconds it will also toggle the scanner between two modes: the default low power mode, and high-brightness (aka “annoyingly bright” mode). 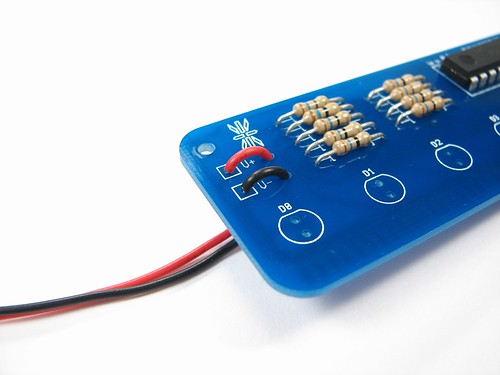 One more neat trick: The battery box wires go up through holes in the board before looping around to get soldered in place. We got the idea for this nice strain relief from Dale Wheat who uses it in his own tiny kits.

This is an open-source project, designed to be hackable.

The circuit board in the Larson Scanner kit is called “ix,” as in Roman for the number nine, because it has nine LEDs onboard. To get started working with this design on your own, you can download its schematic diagram here (33 kB PDF file).
If you look at the schematic, you might find a couple of places to put extra interfaces: you can add an on-board AVR-ISP programming header and even a header to connect to a FTDI USB-TTL serial cable, just in case you want to reprogram it to talk to your computer. There are also two locations to add jumpers– permanent or removable header-type –for user control of the hardware.

The source code is available for download from our
Google Code site. It’s designed for use with AVR-GCC and an AVR ISP programmer. If you’re new to AVR programming and want to hack the Larson Scanner, you might want to start by looking at our list of resources for getting started with AVR microcontrollers. You may also be interested in this article about expanding the Larson scanner with an alternate version of the source code.

Want to talk about this project? That’s what our forums are for.
Got projects based on this board to show off? We’d love to see your pictures in the Evil Mad Science Auxiliary.

86 thoughts on “The Larson Scanner Kit”