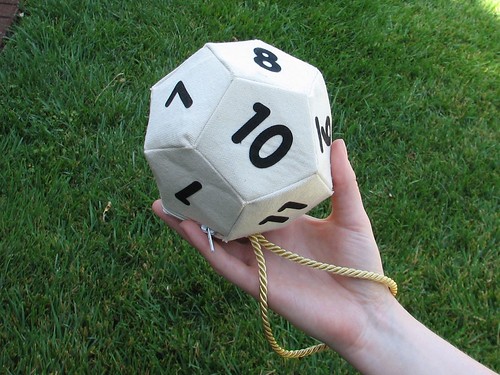 The retro-dork-chic-DIY D12 handbag is back and better than ever– We’ve added a zipper, a handle cord, panel stiffeners and beautiful numbers. 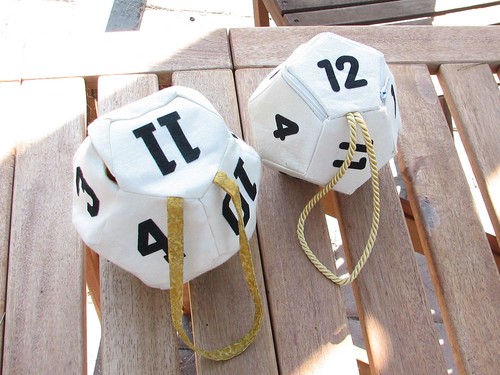 Comparing this side by side to the original, it looks as though the original is getting floppier. That’s partly age, and partly just how much nicer the new model is. The new version is easier to assemble and holds its shape much better, thanks to internal pentagonal stiffeners that are fused to each face. The neat and tidy zipper closure is much neater and more reliable than the original magnetic enclosure.

And… those athletic style numbers (which are the best that our local craft stores carry) just had to go! We used a neat font called BPreplay to get simple rounded numbers that look like they could have been carved into a die. But we carved them with a laser: They’re made from cotton-poly blend which fuses as it is laser cut so that it the edges of the numbers won’t fray. Finally, the new handle cord is an obvious improvement over the simple fabric strip on the first verison.

And, by popular demand, we’ve designed a d20 as well: 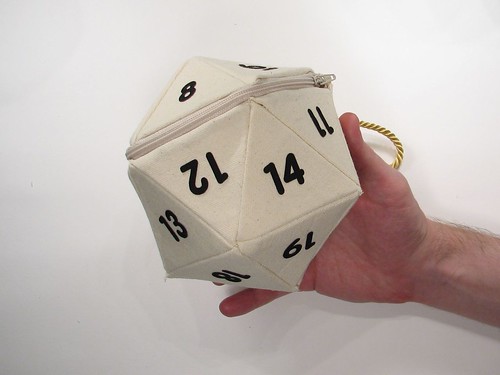 The d20 has the same basic design as the new d12– complete with triangular internal stiffener panels to give it the right shape.

As always, if you are inspired to make something by our projects, we’d love to see the results in the Evil Mad Scientist flickr Auxiliary.

10 thoughts on “Improved handbags of holding”