Today we are spinning off one of our projects and launching a new web site: CandyFab.org. The new site is intended to help foster a community around the idea of accessible, low-cost, and open-source three-dimensional fabrication technologies.

The first major goal of The CandyFab Project is to completely re-engineer the CandyFab within the coming year. We plan to produce an open reference design in hardware and software for what will become the CandyFab 5000S– a low-cost solid freeform fabrication machine that can be built with commercial off-the-shelf parts.
If you’d like to participate in designing, constructing, or using machines like this, we’d love to hear from you. Hop on over to CandyFab.org. 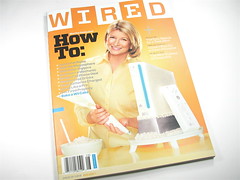 In the August 2007 issue of Wired Magazine (pictured here and just showing up on newstands now), there is a short writeup about the CandyFab.

There’s even a picture accompanying the article, which shows us with the machine. w00t!

Update: The online version is up.
(Nice of them to make that available!)

This entry was posted in Everything Else, General News and tagged candyfab, news. Bookmark the Permalink. 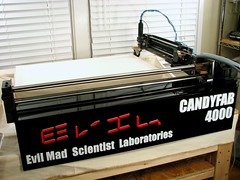 Come see the CandyFab 4000 in action on Saturday, July 28 at 1:00 PM (PDT) at the Exploratorium in San Francisco or live online for the Maker Saturday Webcasts.

Make: Magazine is partnering with the Exploratorium to bring weekly webcasts of interviews with makers this summer. If you haven’t been to the Exploratorium yet, use this as an excuse! It is one of our favorite sources of inspiration.

This entry was posted in Field Trips and tagged candyfab, exploratorium, maker, museum. Bookmark the Permalink.

We have been using POV-Ray to create 3D models and render bitmap slices that can be printed with the CandyFab 4000, our home-built 3D sugar fabricator. One thing that we could do to extend the usefulness of this procedure is to be able to take STL files as input, because STL is the de facto standard file format for 3D fab shops and the machines that do the fabrication. So, here’s how to do it: STL files can be converted to POV-Ray format, and from there we can use our usual bag of tricks to render the set of bitmap slices.


In this article, we explain that process in more detail: We’ll take an STL file, import it into POV-Ray using the stl2pov utility, and then set it up to render a series of slices. Our example file is the sculpture Metatron by Bathsheba Grossman, who has released the STL file for it into the public domain (with some interesting results). The picture above shows Metatron, as rendered in POV-Ray.

The first step is to get and install the stl2pov utility from the author’s page. It’s a cross-platform command line program. (Mac/Linux/Unix users, follow the instructions to compile the source. Windows users, go ahead and download the compiled binary.)

Next, we need an STL file to convert. If you have your own, you can certainly use that. To follow along using the Metatron STL file, go to http://www.bathsheba.com/downloads/ and download the file metatron.zip, a 3.1 MB .ZIP file. After decompressing, that yields metatron.stl, which weighs in at 6.6 MB.


Since we have the utility and the source STL file, we’re ready to perform the conversion. The output file after the conversion will be a large text file that can be awkward to work with. A solution that makes things easier is instead to make it into a POV-Ray .inc (include) file, so that we can simply edit a small POV-Ray wrapper that calls the included file that describes our complex object. To perform the conversion at the command line, execute the following code in the directory with metatron.stl:

The “-s” option turns on smoothing, an option that I have found to increase reliability, and the command saves the converted output to a new file called “metatron.inc”. Unless your computer is really fast, go get some coffee and come back in ten minutes– the conversion can take a while. My file ended up at 28 MB — large enough that you may want to edit it in a dedicated text editor (emacs, vi, AlphaTK….), not the editor built into POV-Ray.


The contents of the new metatron.inc consist of a single definition of a POV-Ray mesh object made out of smooth triangles. It looks like this:

The #declare statement in the .inc file tells us that it defines a POV-Ray mesh object called “m_Rhinoceros_Binary_STL___Jun_15_2005__”, and it is up to us to use it. Minimally, we need to call #include “metatron.inc” to get the file, and then place the object somewhere. Here is a complete code example, for a POV-Ray file (let’s call it “metatronSimple.pov”) that can draw the Metatron, given that the metatron.inc file is present:

Since we can now render the sculpture, are we done? Note quite. There’s one little detail to worry about which is that the mesh object does not really have a defined inside or outside, which becomes a problem when you want to start slicing it up with boolean operations. The solution to this is to define what’s called an “inside vector” that tells POV-Ray where the inside of the sculpture is.
The vector is added just before the closing bracket of the #declare statement, at the very end of metatron.inc, like so:

With that modification, you can now use full constructive solid geometry operations on the imported STL object, including slicing it. As we described in the article about the CandyFab 4000, it’s a matter of rendering an animation in POV-Ray to automatically generate the slices. For each frame of the animation, we take the intersection of the object of interest with a thin, flat rectangle, which is raised up a little bit higher with each successive frame:

As you can see, we’ve also added a code “switch” (“#if (overview)”) that determines whether we’re slicing the object or just displaying it. Also note that the slice thickness can be chosen however you like; our 3D slices are 0.10833″ thick right now, so that’s the value that’s displayed here.

Of course, if you’re just displaying the object (not slicing), you might want to make it look a bit nicer. The rendering at the top of this article was made by adding a background, some texture, lighting, moving the camera, and was otherwise gussied in ways that you don’t want if you’re slicing up the object. These are all controlled by the same software switch (overview) which is at the beginning of this POV-Ray file, which is called “metatron.pov”. You can download this code example (along with metatronSimple.pov) here (3 kB .ZIP file).


Setting overview = 0 instead, we can now render the slices. Turn on animation, i.e., the clock variable, in POV-Ray, and set it to render 58 frames. You can use the lowest quality setting (Quality 1) and antialiasing should be turned off. Running that produces 58 separate bitmap image files; here is what a selection of four of those slices looks like:

Just looking at a few slices doesn’t really give you a flavor of what the whole object looks like, however. One trick to visualize it is to scan rapidly through the image slice files like a flip book. You can watch this little quicktime movie (53 kB) of doing just that to get the idea. If you watch a few times, it can give you good intuition into how the structure actually fits together.

So are we planning to render Metatron in sugar? Yes, but not yet– it’s a detailed sculpture and we need to improve our effective resolution (or total build size) before going there. We have, however, previously used the technique we’ve described here to fabricate Soliton, which is another one of Bathsheba Grossman’s sculptures.

This entry was posted in EMSL Projects, Software and tagged candyfab. Bookmark the Permalink. 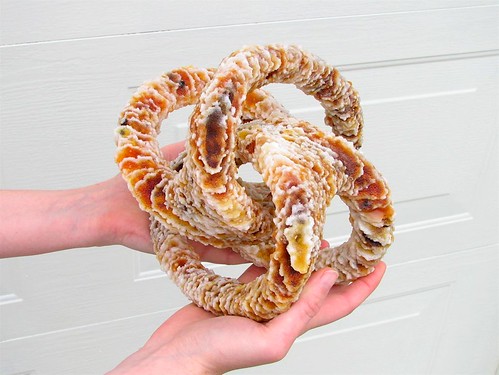 This is a rendering of the sculpture Soliton by Bathsheba Grossman, as output by the CandyFab 4000; it’s a three-dimensional form made out of pure sugar. Seeing Bathsheba’s sculptures at the 2006 Maker Faire was the inspiration for us to build the machine in the first place, so it’s quite exciting to be able to print this. (The design is used by her kind permission– please buy some of her sculptures!)

This is our second try at fabbing this difficult shape. Our first attempt was at a somewhat smaller size and ran into trouble with the thin beams when *one* of our thin horizontal layers turned out to be too weakly bonded. To avoid a second failure, we enlarged the model but also ran the heater element very hot and for an extended period of time to make the pixels srong, but also larger, more rounded, and richer in color– a darker caramel.

In this view we’re looking right down at the printed layers of sugar; we think that the grain of the layers makes this look a lot like a wood carving.

Of course, that’s not all that we’ve been printing this week. Here is one more large-scale object that we made: 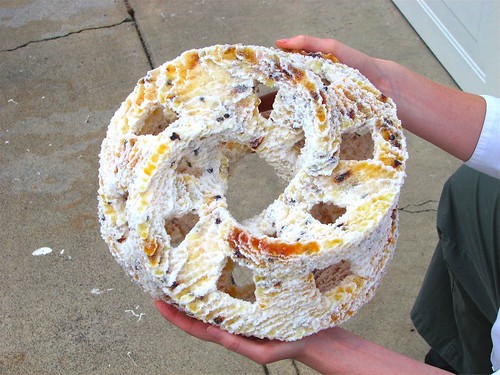 The shape is a 3/4 twist mobius strip with a square cross section and windows cut at regular intervals in the side. Even though it’s hollow, it still weighs seven pounds and fourteen ounces– that’s a lot of sugar. We’re bringing this monster to Maker Faire this weekend, so you can see it for yourself, too.

This entry was posted in Art, CNC, EMSL Projects, Play with your food and tagged art, candyfab, cnc, food. Bookmark the Permalink.

Maker Faire 2007 is this coming weekend, May 19-20, in San Mateo, CA. We’ll be bringing the CandyFab 4000 to show off. Besides the CandyFab, we also have one or two (or maybe even three) other projects at the Maker Faire, depending on how you count, which we’re scurrying to (1) finish up and (2) document sometime this week.

Consequently, our publishing schedule will continue to be a little wonky for the next week– so little to do so much time and all that! So, stay evil and come meet us at the Maker Faire!

This entry was posted in Field Trips and tagged candyfab, makerfaire. Bookmark the Permalink. 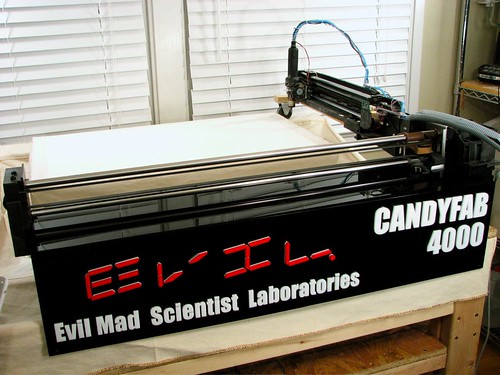 In February we gave a sneak preview of our project to construct a home-built three dimensional fabricator. Our design goals were (1) a low cost design leveraging recycled components (2) large printable volume emphasized over high resolution, and (3) ability to use low-cost printing media including granulated sugar. We are extremely pleased to be able to report that it has been a success: Our three dimensional fabricator is now fully operational and we have used it to print several large, low-resolution, objects out of pure sugar. 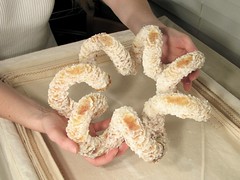 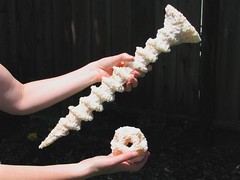