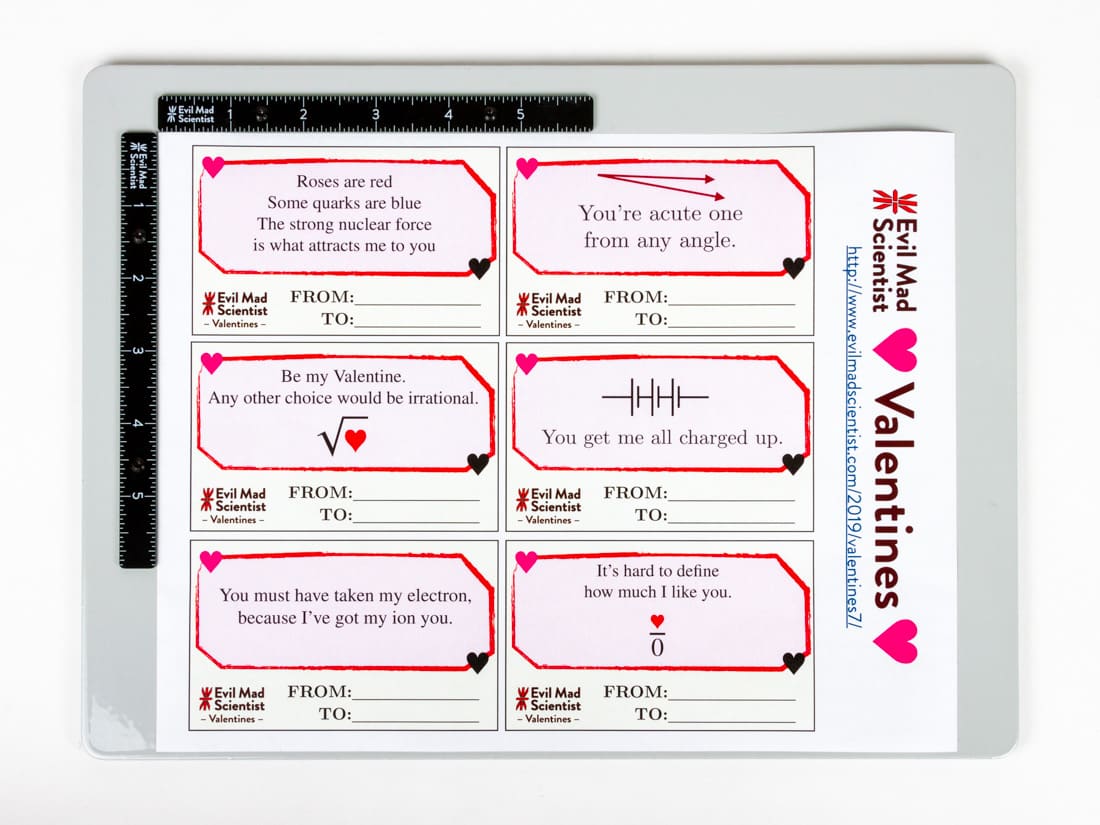 Today we are releasing our newest set of “Download and Print” cards for Valentine’s day. This is our seventh year, and seventh set of cards. The 2013 set had six equation-heavy cards, the 2014 set was a set of six symbol-heavy cards, and the 2015 set included love, hearts, and arrows. The 2016 set featured Pluto’s cold heart, and the perfect card for your robotic expression of love. In 2017 we featured atomic orbitals, exponential growth, and an epsilon delta declaration of love. The 2018 set featured normal force, stable equilibriums, and something about RPN calculators. 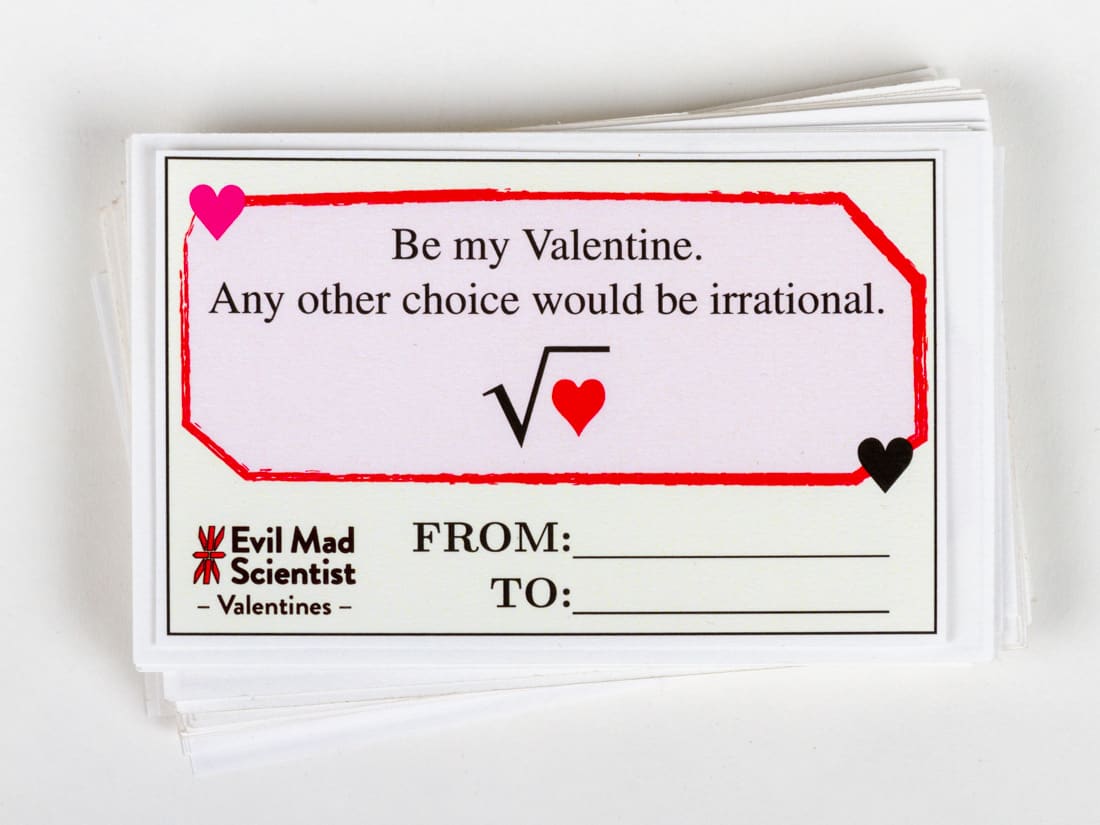 To the extent that it is important that romance is rational, this is an extremely romantic card. 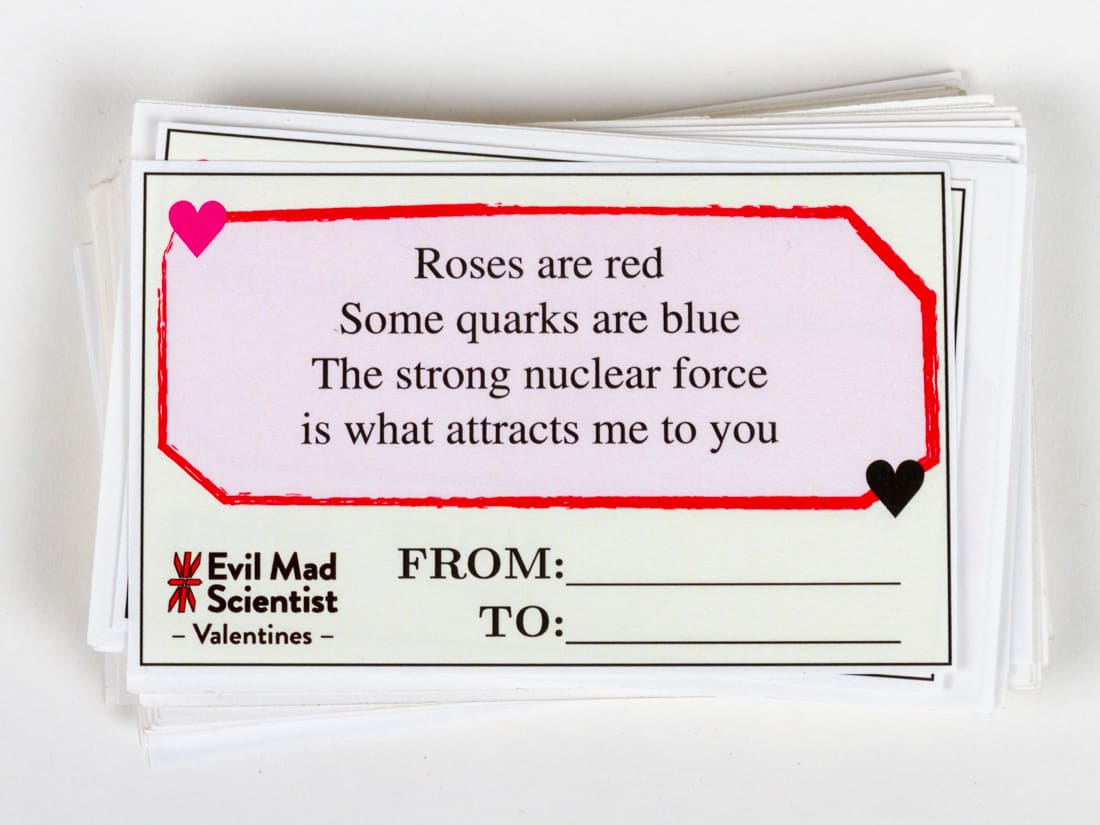 A proton or neutron is made up of three quarks, but its mass turns out to be dominated by chromodynamic binding energy, not the mass of those quarks. Corollary: By weight, humans are almost entirely binding energy.

Unlike most Valentine’s cards, which neglect the vast majority of your potential paramour, this card will let them know that you appreciate more than a tiny fraction of them. 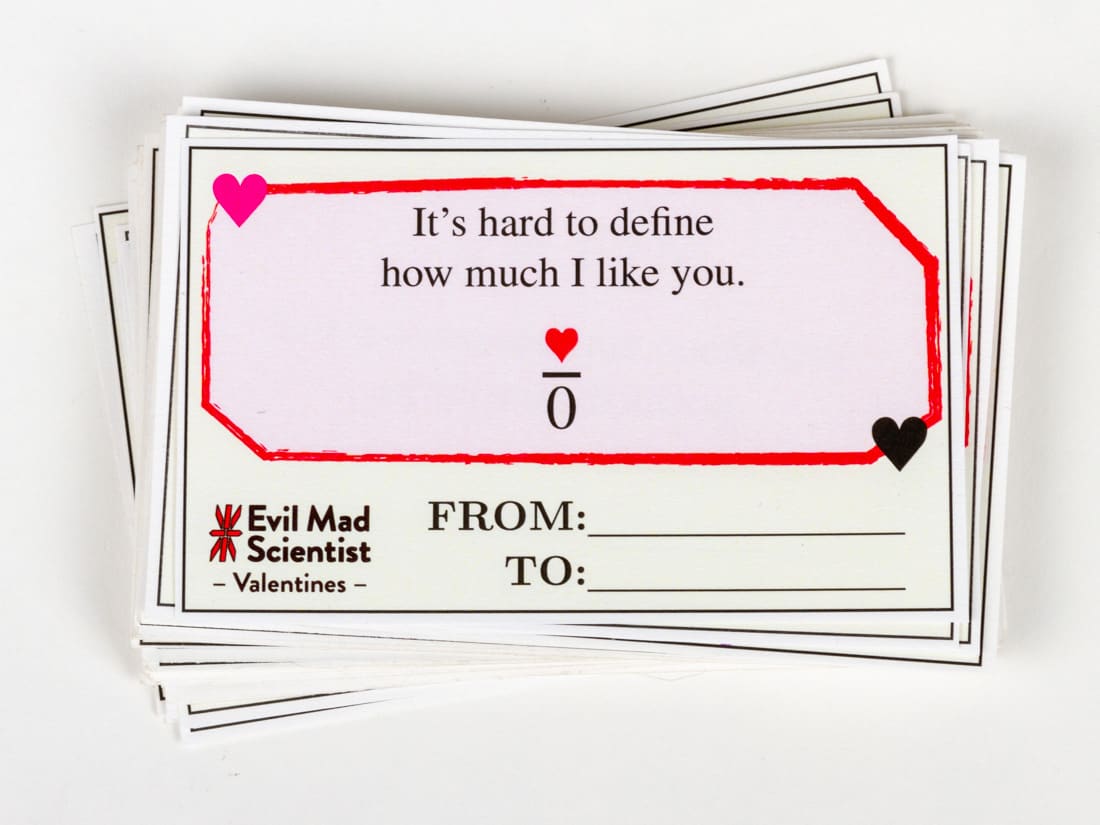 I tried to compute my love for you but my calculator gave me an error. 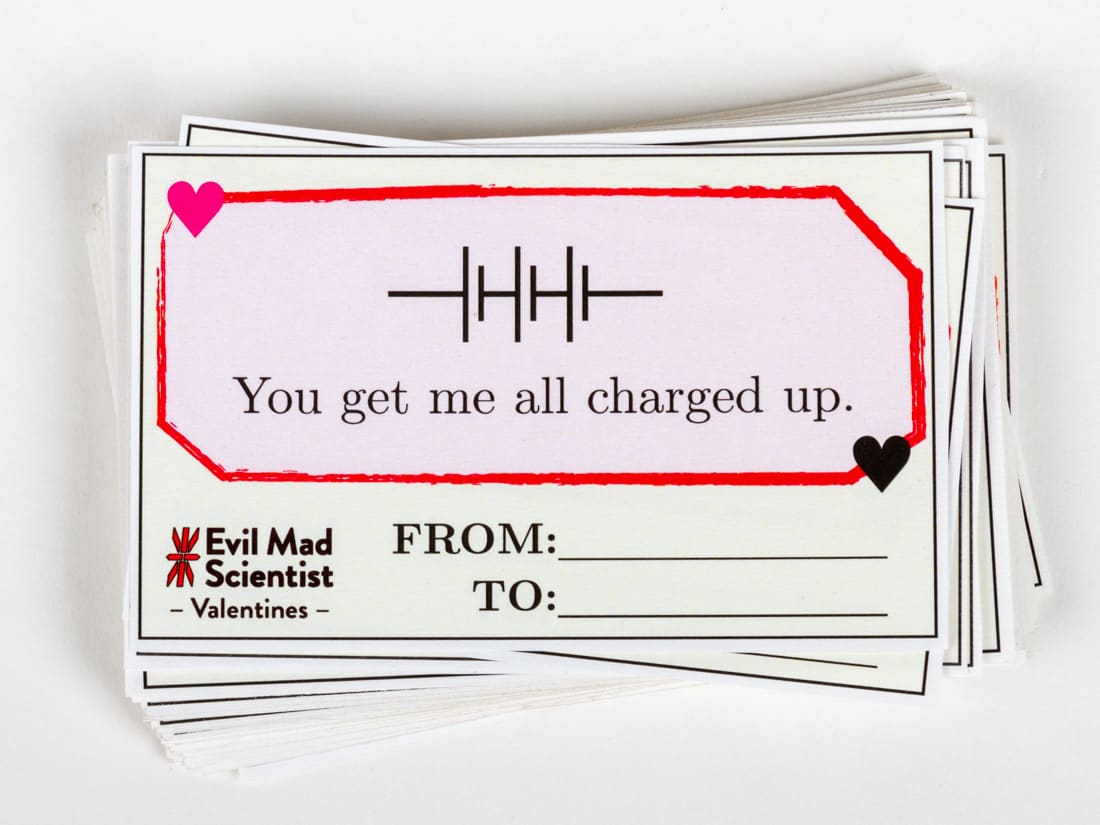 Like a LiPo battery charged at the proper rate so that it does not explode.

You had better be positive before you give this card to someone. 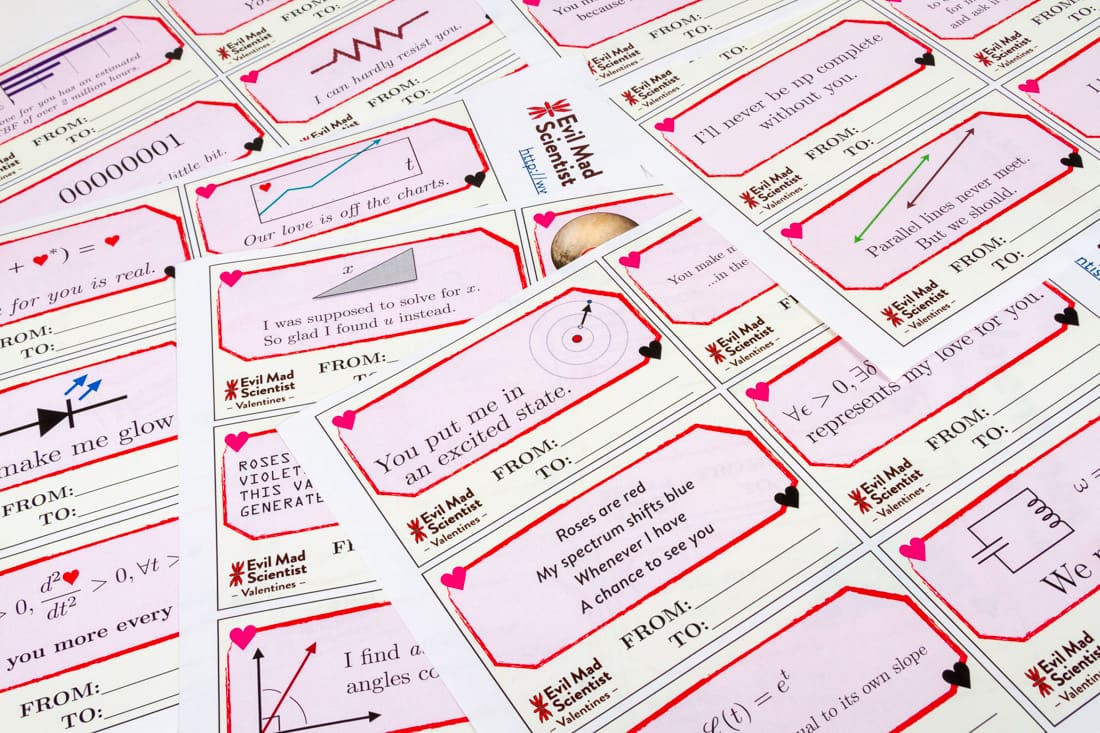 You can download the full set here, which includes all 42 designs from all seven years (PDF, 1.8 MB).

As usual, print them out on (or otherwise affix to) card stock, personalize, and [some steps omitted] enjoy the resulting lifelong romance.

This entry was posted in EMSL Projects and tagged holidays, humor, valentines. Bookmark the Permalink. 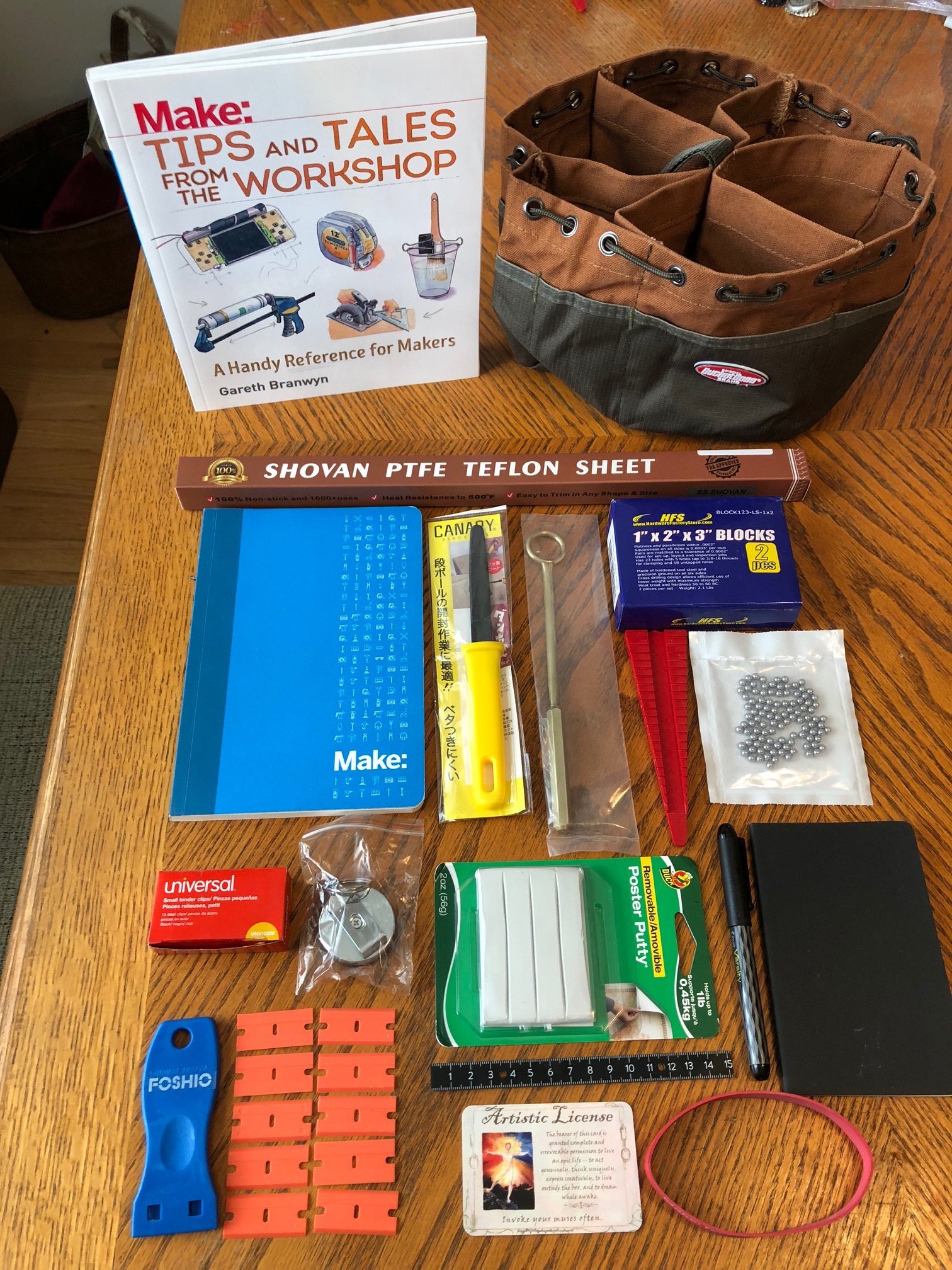 Gareth Branwyn posted an article on creating a gift basket for makers. It is full of awesome tools, including one of our favorites, the resistor lead forming tool. 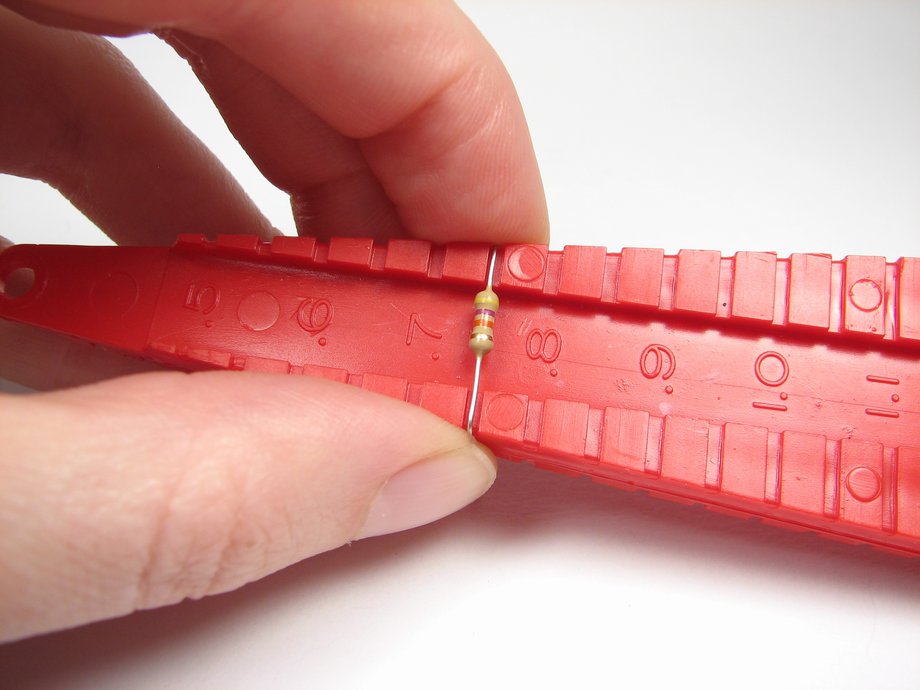 He’s also having a give-away for his example basket!

To be eligible, all you have to do is post an entry, on Twitter, Instagram, or Facebook, mentioning my book, this article, and/or the idea of a tool gift bag, and include this link and hashtag: https://amzn.to/2DPaXAd #tipsandtalesfromtheworkshop. The only things you have to include are the link and the hashtag. You can post as many times as you like. On Dec 12th, I’ll do a random drawing from the hash-tagged entries and send out your gift basket.

Note: This drawing is only available to those residing in the United States.

This entry was posted in General News and tagged holidays. Bookmark the Permalink.

This year’s card features a snowflake that uses two data points in its generation: how long we’ve known the recipient and the air quality where we’re sending the card. It is unique to the person we sent it to, and no two snowflakes are alike.

After getting some inspiration from dozens of photos of snowflakes, we brainstormed about the different types of symmetry and shapes that would make our design. We then generated the snowflake with a script that draws a certain number of radial spikes based on how long we’ve known the person we were sending them to. Other parameters for the generation rely on random numbers, ensuring that each generated snowflake was completely unique. 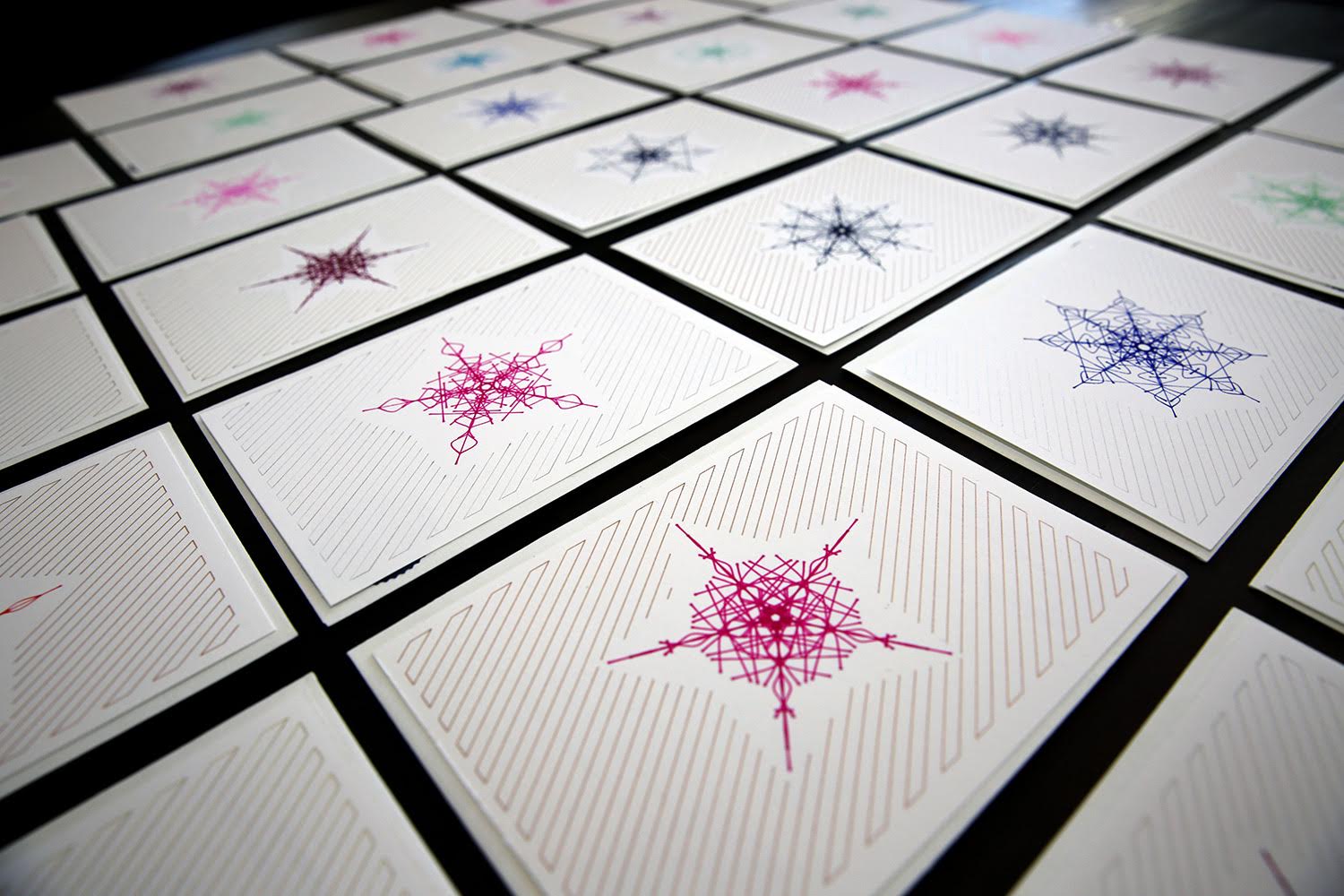 They’ve published the code on github, as well as a set of svg files.

This entry was posted in Art, Software and tagged AxiDraw, holidays. Bookmark the Permalink. 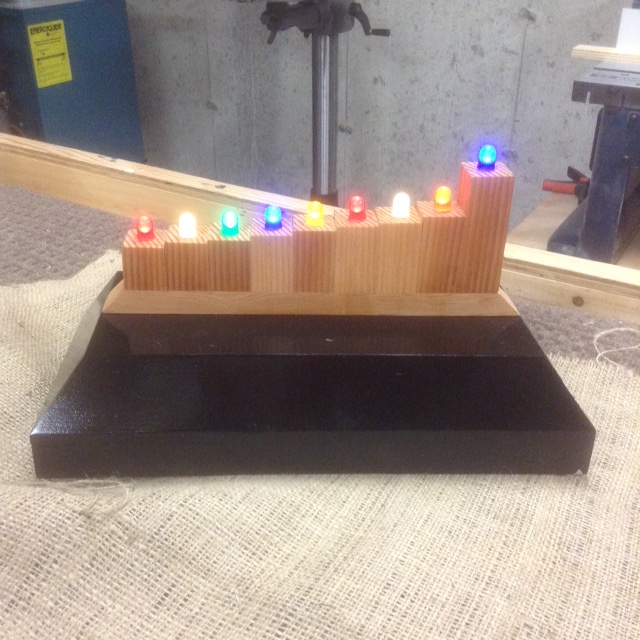 Dave K. sent us these pictures of the menorah he built with the Deluxe LED Menorah kit. It’s a one-of-a-kind project, made from scrap wood from his shop. 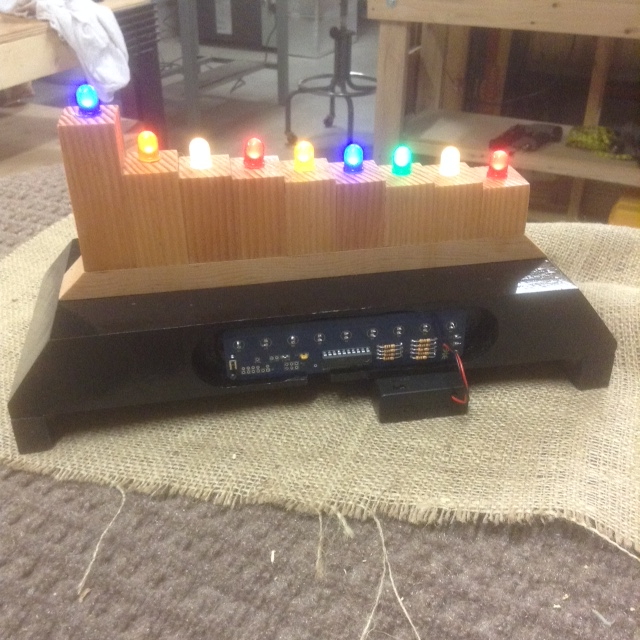 The base has a cutout to hold the PCB and battery holder, and the LEDs are wired up through the blocks of wood. Thanks for sharing your project, Dave!

This entry was posted in Electronics and tagged holidays, LEDs. Bookmark the Permalink. 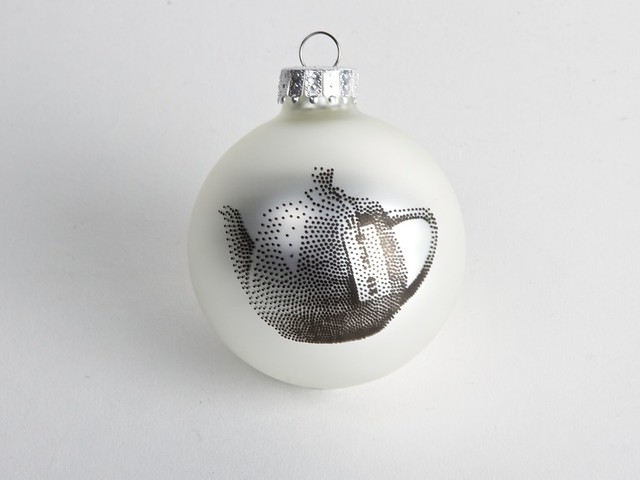 A Utah Teapot is an ideal design for a geeky ornament. For this one, I generated a vector stipple drawing from a photograph of the source object for this digital design icon. There are certainly many other ways to create a Utah Teapot ornament, including, of course, 3D printing. 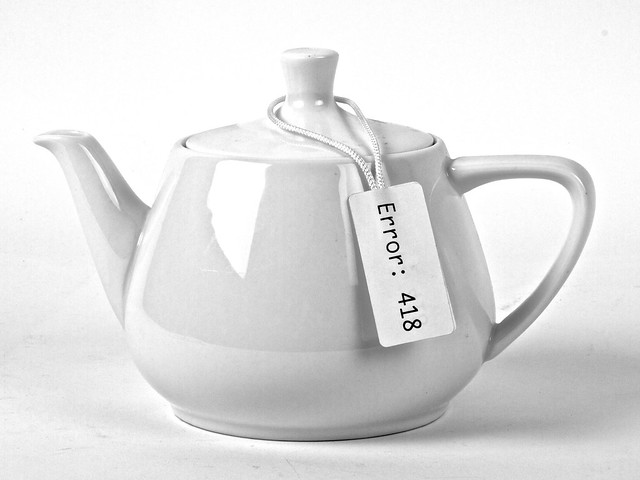 In this case, I took our photo of our teapot, adjusted it to give it slightly higher contrast, and loaded it into StippleGen 2. 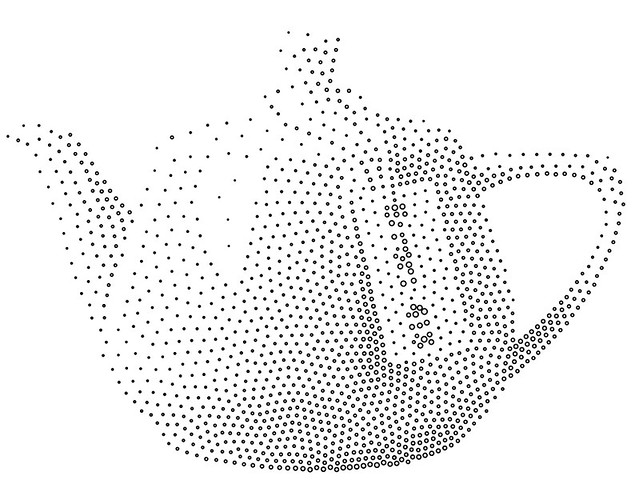 I removed any background stipples and plotted it on an ornament. The ornament is 2.6 inches in diameter and I used a 0.2 tip Copic Multiliner SP. I have posted the design on thingiverse.

This entry was posted in Art, CNC, Eggbot and tagged holidays. Bookmark the Permalink. 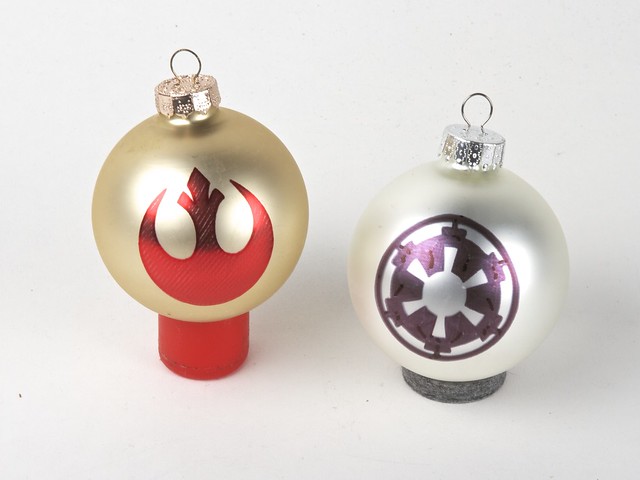 We’re getting into the spirit with a couple of seasonally appropriate decorations. The Rebel Alliance Ornament and the Imperial Crest Ornament for EggBot are both available on thingiverse. Our guide to printing ornaments with the EggBot may be helpful, too.

Both designs are derived from a set of silhouettes from vecteezy.com. 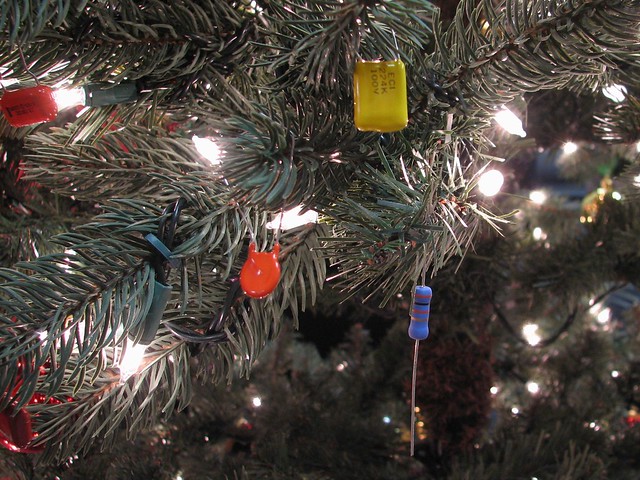 It’s the time of year we post a link to our Holiday Project Archive! Head over for cookies, decorations and food projects.

This entry was posted in EMSL Projects and tagged holidays. Bookmark the Permalink. 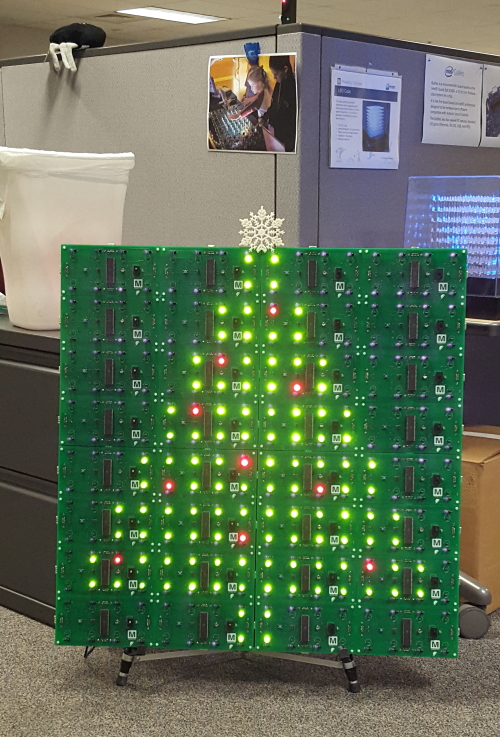 Our friends at Mouser sent us this picture of their Octolively derived display, updated for the holidays:

We continue to have fun with your Octolively module design. In the attached photo you can see why we decided to use sockets for the LEDs on our boards.  We plan on changing out the display for each of the holidays.

I was a little concerned at first about using the red LEDs with resistors that were chosen for white or blue, but they’re socketed, so replacing any that get damaged by overdriving should be easy! Looks like a fun way to celebrate at the office, and the snowflake tree-topper is a nice touch.

This entry was posted in Electronics, Microcontrollers, Open Hardware and tagged holidays. Bookmark the Permalink. 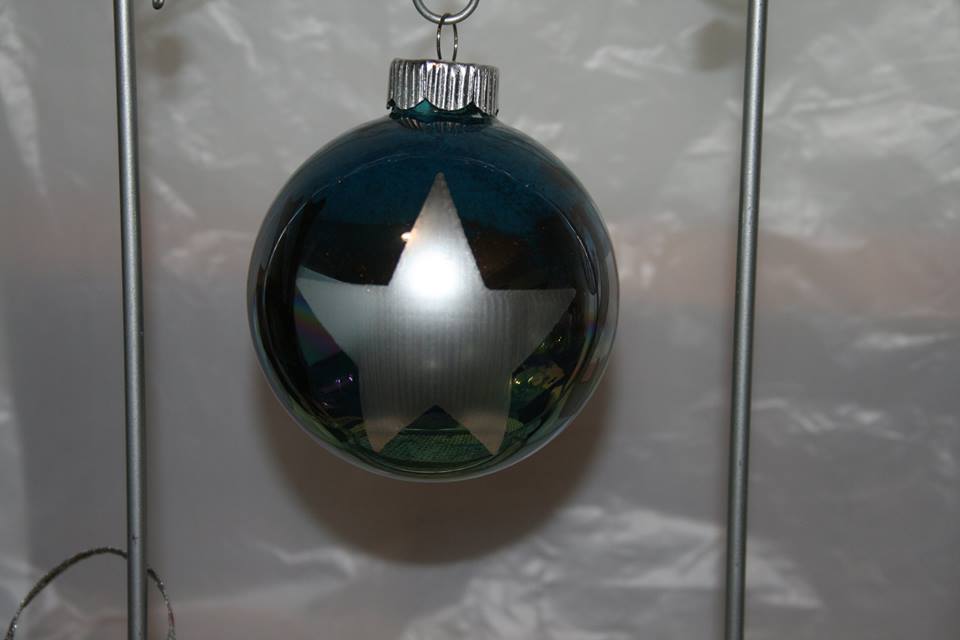 Our friend Fran has been making holiday ornaments with the EggBot and writes:

I just wanted to let everyone know that I have finally gotten to be able to use the Pilot Gold/Silver Markers.

She suggests dividing the drawing into layers so that after each layer you can take the pen out to shake it to keep the ink flowing. We’ve added her tips to the wiki page about choosing pens for the EggBot.

If you have other tips for which pens you like to use or for working with ornaments, we’d love to hear about them!

This entry was posted in Art, Eggbot and tagged holidays. Bookmark the Permalink. 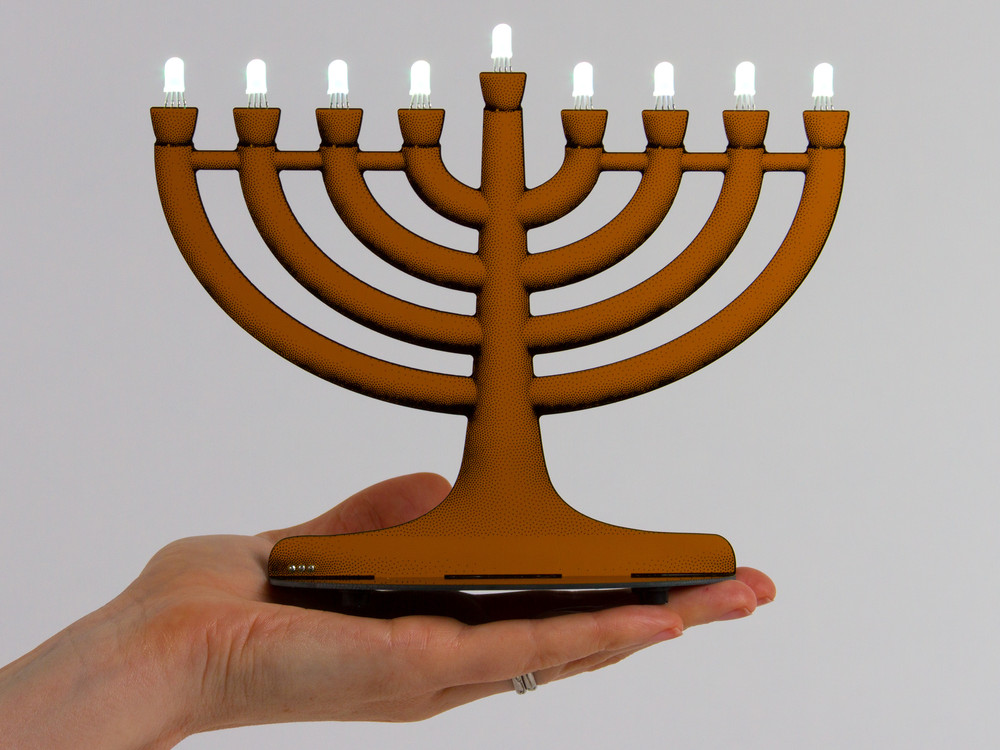 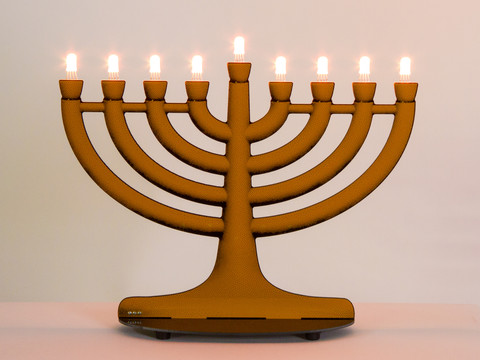 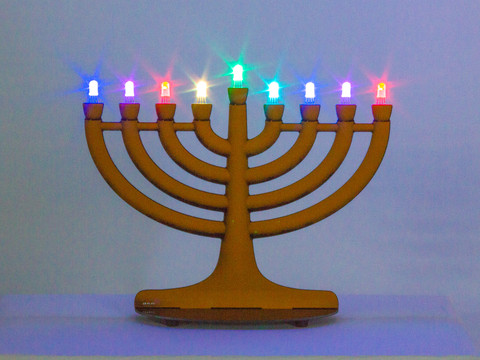 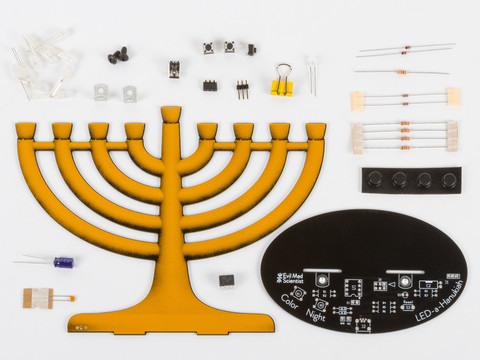 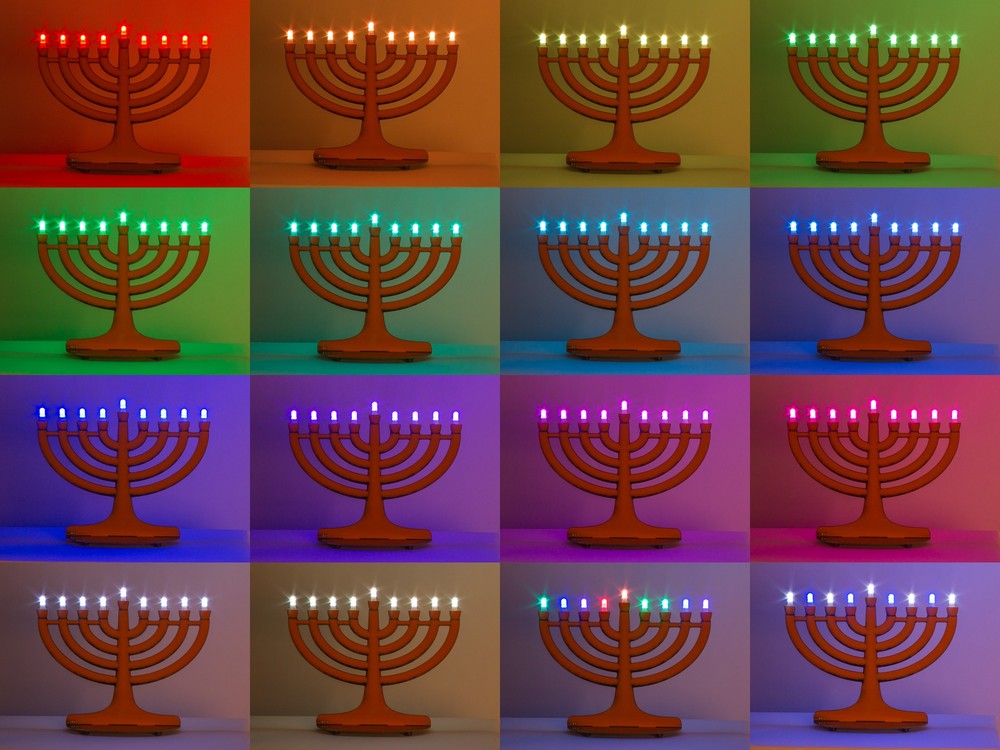